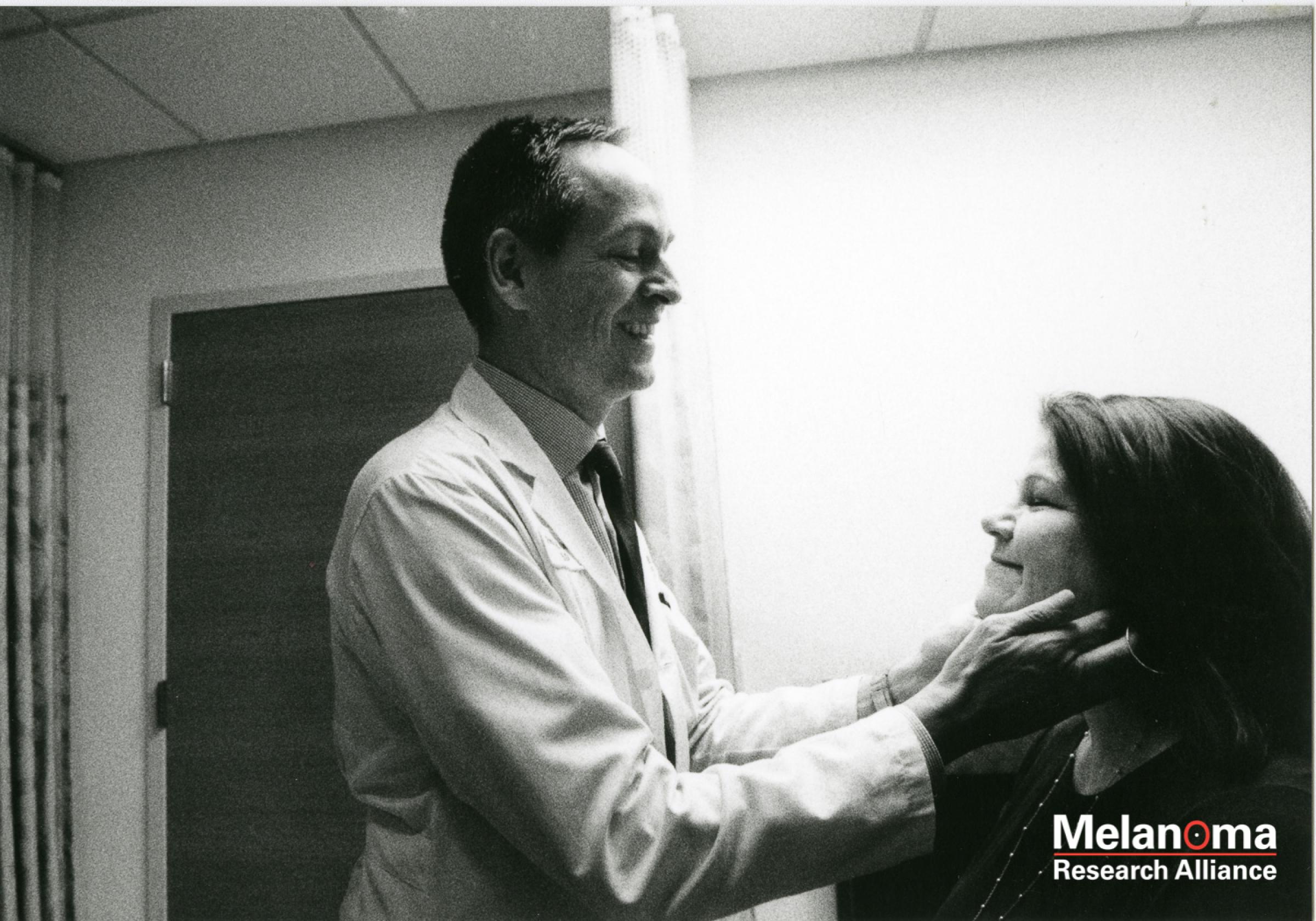 In 2007, while staining her deck at home, Debra Likes – who goes by Debbie – decided she’d had enough and would finally see her primary care doctor. She had been ignoring a mole on her left calf for more than a year as she watched it slowly transform from a round pink mole to an oval shape that began to crack and bleed. She kept telling herself that it was fine because she had had it checked two years before and there was no concern on the part of her doctor. She’d tried to hide it with band aids, but enough was enough.

“I just hated it – but never thought too hard about it because it wasn’t a dark spot,” says Debbie. “I really went [to the doctor] because it was annoying and ugly.”

Thankfully – that was enough to get her to make an appointment. The mole was removed.  Debbie got the call at work a few days later that the lesion was indeed melanoma.

“It was terrifying. I left work, flew home, and thankfully my husband was there,” remembers Debbie. “When it came to cancer – I always worried it would happen to me – while at the same time thinking it never would.”

The week after her surgery was one of the hardest Debbie had ever faced. As she recovered, she not only waited to find out if her melanoma had already started to metastasize, but she was also unable to shake the realization that her youngest daughter was about the same age that she was when her own mother died due to an unrelated cancer.

A week later, the results from her Sentinel Lymph Node Biopsy (SLNB) came back negative. To say she was relieved was an understatement.

“I was ecstatic – but I also realized I lost a week of my life worried about something that never happened and I had no control over,” says Debbie. “It taught me to do everything I could not to let my mind go to the worst-case scenario, and to focus on the here and now.”

For Debbie, it was enough to know what she had and what she still faced; beyond that, she tried to live her life the best she could. Her husband, as her partner through her melanoma journey, was her researcher.

“He wanted to understand everything and all of the promising ‘next best things’ that were on the horizon,” says Debbie. “It worked well for us because he was the preparer while I focused on healing.”

A few years later, Debbie faced her first recurrence. At first, everyone thought it was a harmless cyst, but as they dug deeper it became clear that this was actually far more alarming. Biopsies determined that two different spots in her right arm were actually melanoma.

Surgery successfully removed both tumors and this time Debbie chose to undergo a year of interferon therapy to reduce the risk of recurrence – what doctors call adjuvant therapy.

“My goal, from the get-go, was to get through this,” says Debbie.

And she did – but the reprieve was short-lived. Debbie’s melanoma recurred for a second time in 2011.

Once again, she had surgery to remove the tumor. There would be two more recurrences addressed with surgery (all in her left calf) and then she was asked to consider a clinical trial testing the effectiveness of a personalized RNA-based vaccine developed by MRA-funded investigator Dr. Patrick Ott.

In the trial, Dr. Ott, clinical director of the melanoma center at Dana-Farber Cancer Institute, developed a personalized vaccine for each patient based on specific mutated genes found in their tumor. Because the mutations are only present in the patient’s tumor, the immune response is directed only against the tumor and not healthy tissues. He coined the approach “NeoVax.”

While the approach was well vetted in preclinical models, this was the first time it would be used to treat patients.

A couple weeks later, Debbie received her first NeoVax injections. She quickly developed huge, inflamed welts on her stomach – like an extreme reaction to the flu shot. She also experienced mild flu like symptoms for a day or two after the first injections.

“I felt like I had somehow let Dr. Ott down, so I really tried to just suck it up and get through it,” says Debbie. “I just push myself too hard sometimes.”

Fortunately – each time she received another dose of the vaccine, her reaction to it improved. Before she knew it, she was sitting in an exam room with Dr. Ott as he reviewed her last scans as part of the trial.

Once again, her melanoma was back.

She had surgery once again, but in this case, there was not a clear margin. Debbie underwent radiation therapy, focused specifically on the local recurrence. After dealing with a serious bout of cellulitis – a bacterial infection - she had another follow up PET scan that showed No Evidence of Disease.

“Every day my husband and I pray that this combination – of radiation and NeoVax – will be what beats this once and for all,” says Debbie. Throughout this journey, Debbie is so appreciative of the care and attention she receives from Dr. Ott and his team at Dana-Farber. “Dr. Ott isn’t just a doctor – he’s MY doctor and I really just can’t say enough good things about him.”

Now, more than two years later, Debbie continues to be melanoma free. Her next scan will take place in January – and she’s crossing her fingers that it comes back clear.

“I’m very positive, but to be honest it’s happened so many times now, it can be hard to stay upbeat and positive sometimes,” says Debbie. “I try not to live scan-to-scan, and instead to just be grateful. I can deal with this.”