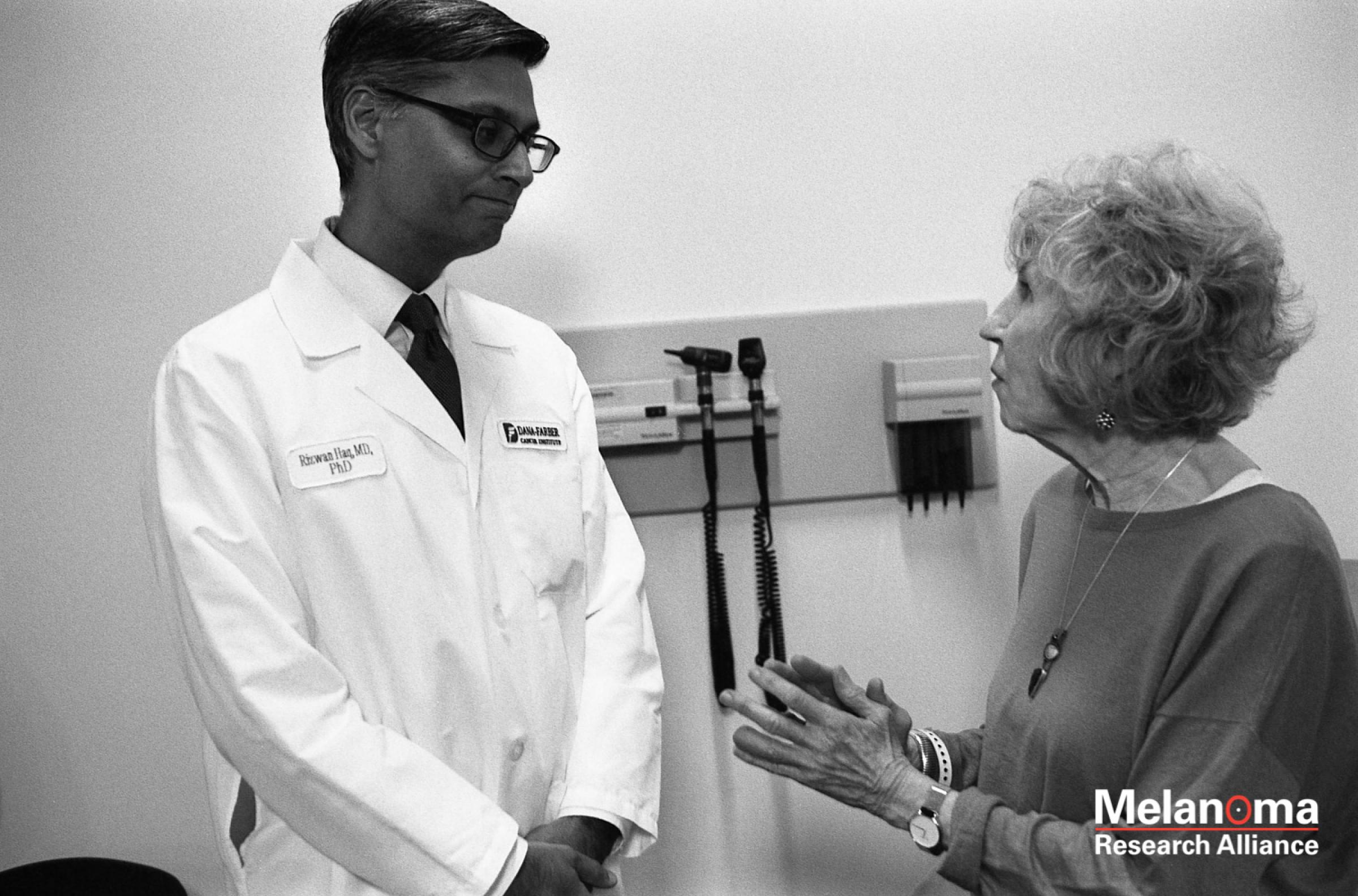 On September 7, 2015, Labor Day, Karen went to her local hospital. She’d suddenly been having problems writing and difficulty locating items in her home. When her x-ray results came back, they apologized and told her that she had both lung and brain cancer.

Days before, Karen would have told you her life was nearly perfect. Her daughter had just gotten married, she regularly went running on the beach, and she generally felt very well.

“I was in shock – it was just unbelievable.”

Karen, her husband Bruce, and their two daughters, Molly and Cate, made the two-hour drive to Dana-Farber Cancer Institute, where they hoped to get a firm diagnosis and treatment plan. There, Karen met MRA-funded clinician-scientist Rizwan Haq, and after some additional tests, she started to get some answers.

“Dr. Haq was wonderful,” says Karen. “He never rushed me, no question was too simple, and he gave me the confidence to keep going.”

Karen learned that she didn’t have brain cancer and lung cancer – she actually had stage 4 melanoma that had metastasized, or spread, to both places. While still a very serious diagnosis, at least now she knew definitively what she faced.

Dr. Haq suggested stereotactic radiosurgery (SRS) to shrink the metastases or mets in her brain and recommended that Karen move forward with an aggressive regimen of ipilimumab + nivolumab combination immunotherapy. Ipilimumab (Yervoy®) is a CTLA-4 checkpoint inhibitor and nivolumab (Opdivo®) targets and blocks the PD-1 molecule. In combination, the two checkpoint inhibitors take the breaks off of the immune system allowing it to attack cancerous tissue.

Before she agreed to his recommendation, she asked how long she had if she didn’t respond to treatment.

With much hesitancy Dr. Haq solemnly told her “Probably less than six months.”

Karen felt numb – but also knew there was little else that she could do.

The first four months were the hardest. This is the part of ipilimumab + nivolumab dual therapy when patients are infused with both medications one after another. After four dual infusions, patients continue with nivolumab by itself.

The first few months was also when Karen became increasingly anxious and worried about what her next scan might show. She connected to – and started to learn from – a Buddhist Nun who suggested that mindfulness, daily meditation, and some exercises could help to ground her during this period.

“I realized that I had to really focus on living in the moment,” says Karen. “A daily meditation practice helped get me through this.”

Karen responded well to the four infusions of the dual therapy – and to the nivolumab monotherapy.

“I was tired, had some colitis, and skin issues – but nothing like what some people face,” says Karen. “My symptoms were manageable with monitoring and support.”

The treatment was working. Her tumors were shrinking, and after almost 3 years of nivolumab her disease was stable.

Now, more than a year without any treatment, Karen continues to be healthy – with detectable yet stable disease.

Karen and her family felt that the conscientious care given to them by the team at Dana-Farber far exceeded their expectations. “Dr. Haq was just such a confident and calm professional. He always went the extra mile and I really trusted that we’d get through this together,” says Karen.

Karen and her husband Bruce were so impressed by Dr. Haq – and his research – that they created the O’Connor- MacGregor Fund for Melanoma Research with a $100,000 donation to support his innovative work.

“We wanted to support his work,” says Karen. “I want to give more and to encourage other people to support ongoing melanoma research.”

Today – Karen is a different person.

“I obviously would have preferred not having melanoma – but I’ve also learned so much from it,” says Karen. “I really am a new person. I appreciate life more because I know how precious it is and that it can be taken away at any time. My advice: take life as it is. Act – don’t react.”

Learn more about opportunities to Get Involved with MRA - including ways to Sponsor a Named Award.