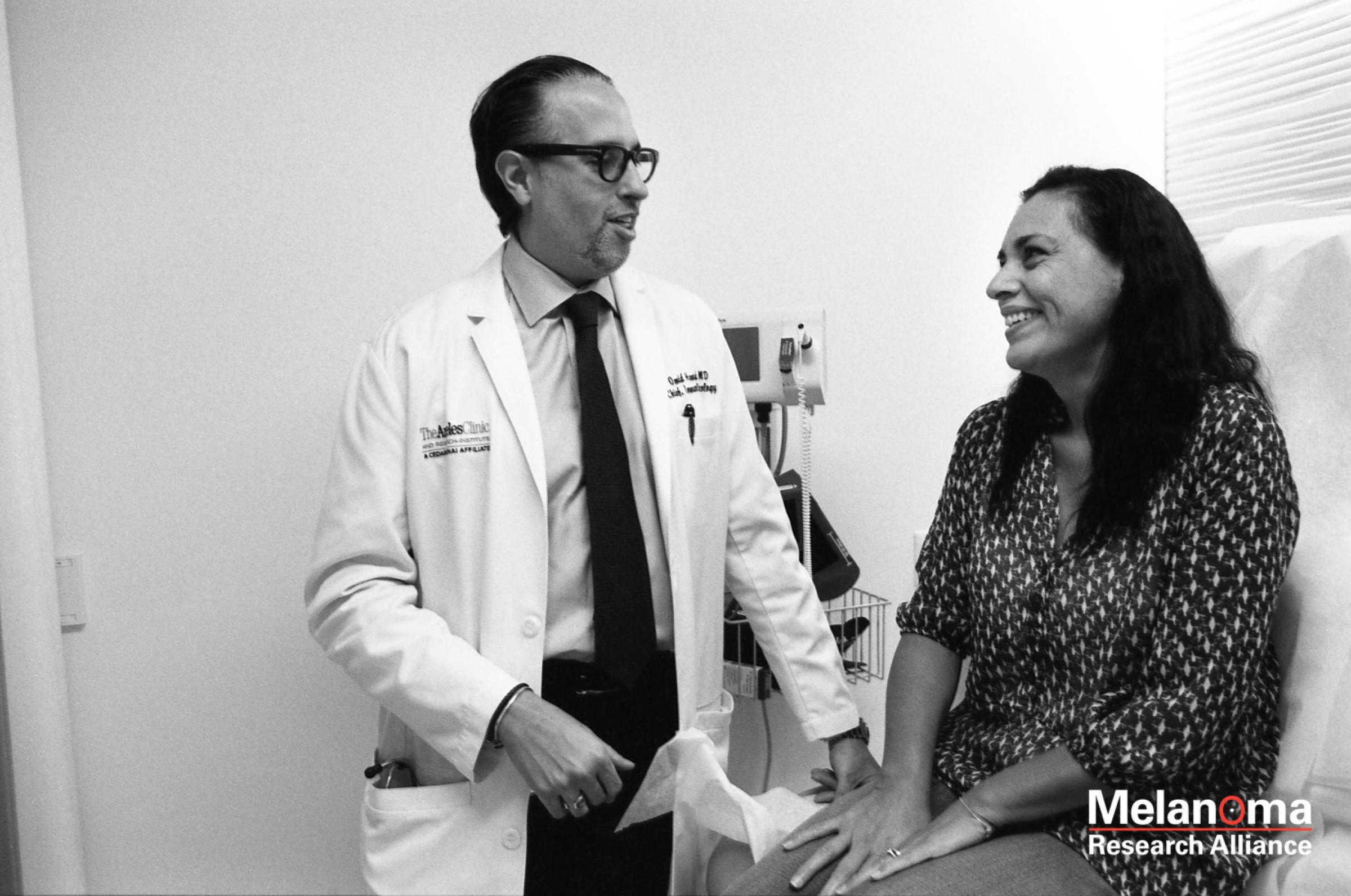 Minerva Quezada was five-months pregnant with her son when she found out she had melanoma.

“Here I was, a healthy pregnant woman and when they said melanoma, I was very much in denial,” remembers Minerva. “I even told the doctor to ask the lab to double check the results.” Unfortunately, even after double checking, the biopsy results were conclusive. Minerva did have melanoma.

However, one thing was perplexing her doctors – where did the melanoma come from?

Mucosal melanoma – which invades mucosal tissue in the body including the nasal cavity, lining of sinuses and mouth, the GI tract, vagina, anus, and other areas – makes up about 1% of melanoma cases each year. Even the best melanoma specialists have little, if any, experience with it. Even worse, mucosal melanoma tends to be more aggressive and less responsive to available therapies compared to cutaneous melanoma.

The diagnosis was crushing.

“I just couldn’t shake the thoughts that ‘this is my death sentence.’ I was just so overwhelmed,” says Minerva. “There is just this whole other world of melanoma that no one has ever heard of.”

Minerva’s doctors were not optimistic about her prognosis and she was told that she may have just 18-months to live.

Fortunately, the conversation drastically changed when Minerva’s first met with Dr. Omid Hamid, director of the melanoma program at The Angeles Clinic.

“It was a completely different approach at The Angeles Clinic,” says Minerva. “They told me that I had a real shot and that they were going to do whatever they could to help me see my children grow up. It was the first time I had hope that maybe I could beat this.”

Minerva gave birth to her son, David, about eight weeks early and just four weeks later, she was scheduled to begin her first melanoma treatment.

After David was safely born, Minerva underwent additional scans to determine the extent of melanoma in her body. The scans revealed that tumors surrounded her liver, pancreas, and colon.

Due to the severity of the metastases, Minerva’s first treatment regimen was very aggressive, and consisted of three chemotherapy agents (Dacarbazine, Vinblastine and Cisplatin) and two immunotherapies (Interferon and IL-2) – what was called biochemotherapy. Due to the toxicities and dosage of the cocktail, it was administered over five days in the hospital and then repeated every three weeks. With her husband Frank by her side, Minerva braved six rounds.

“Dr. Hamid said my melanoma was like a freight train – and that the biochemo was needed to slow it down,” remembers Minerva. Minerva would become eligible for some of the exciting new clinical trials that were starting to enroll patients, if her tumors shrunk.

“It was unbelievably hard. I had a newborn son and a five-year old daughter – and it was such a difficult course of treatment,” says Minerva. “But it worked. Many of her tumors shrank and then disappeared.”

With the reduced tumor burden, Minerva’s primary tumor site – finally identified in her rectum – was easily removed through surgery. She also enrolled in a clinical trial testing the safety and efficacy of the then-unapproved CTLA-4 inhibitor, ipilimumab (Yervoy®).

The experimental immunotherapy wasn’t curative – but it bought Minerva time with her family. She would continue to get monthly infusions of ipilimumab for the next two years until metastases (mets) in her brain – became symptomatic. “I started to experience tremors in my arms and felt like I was swaying, like I was on a boat,” says Minerva.

A craniotomy was performed to remove the largest of her brain mets. After recovering, she enrolled in a second clinical trial testing the effectiveness of anti-PD-1 inhibitor, pembrolizumab (Keytruda®).

At the time, researchers didn’t yet know that immunotherapies could cross the blood brain barrier. So when Minerva’s scans showed significant growth in her brain, they scheduled a second craniotomy.

“During the surgery, they realized that the symptoms I was experiencing were actually being caused by the Keytruda,” says Minerva. As the drug spurred her immune system to attack the cancer, it was also causing swelling. And the swelling was causing her symptoms. “It was actually reassuring that this was working. I even made it into some medical journals.”

Minerva continued on pembrolizumab for years and it wasn’t until 2019 that her melanoma started to show signs that it was developing resistance to the treatment.

She enrolled into a third clinical trial, this time trying a new approach called Tumor Infiltrating Lymphocytes or TIL Therapy.

TILs, or tumor-infiltrating lymphocytes, are the white blood cells that have successfully fought their way into the tumor. One theory is that these TILs are insufficient in number and/or otherwise incapable of fully reacting to the tumor as a foreign invader to be killed. TIL therapy works by harvesting TILs from a patient’s tumor, expanding their numbers greatly in a lab, and then administering these lab-grown TILs back into the patient’s body. These infused cells, already primed to successfully swarm the cancer, are then further activated with high-dose interleukin-2 (IL-2).

Minerva spent the first 18 days of August in the hospital receiving the treatment. Now, while being closely monitored, she waits to see if she’ll respond.

“If nothing else, melanoma has taught me patience. At first, I hoped biochemotherapy was going to be my cure. Then – I hoped for Yervoy, then Keytruda. With each new treatment I hope for a cure – but it hasn’t come yet.”

While Minerva hasn’t yet been cured from her melanoma – she has lived for 10 years with it. Her children are now 15 and 10 – and she’s been able see them grow up.

“I never could have imagined it,” says Minerva. “I’m in this for the long haul.”