7200 Miles for 7200 Lives Lost: Cycling and Community Building After a Melanoma Diagnosis 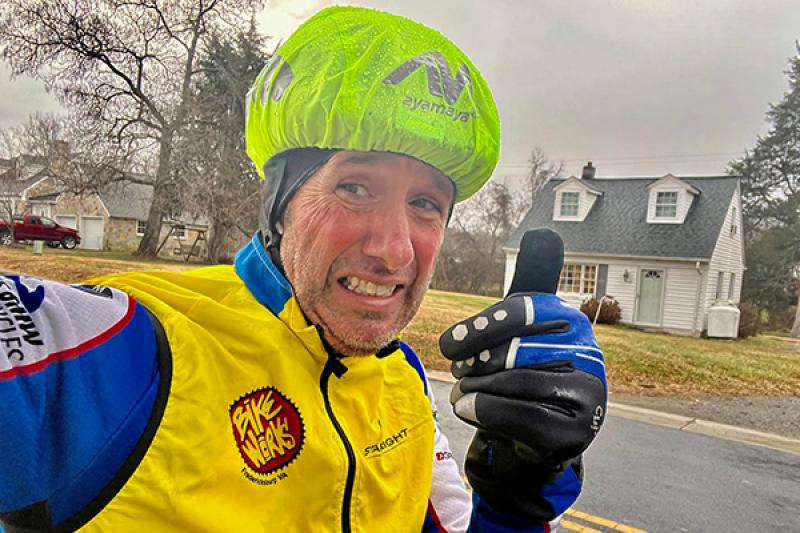 Last year in the US, there were an estimated 7,180 deaths from melanoma. For melanoma patient and competitive cyclist Bill Evans, this number is on his mind every single day. Two years into his own journey with advanced melanoma, Bill is raising awareness and funds for melanoma research through cycling, with a goal of completing one mile for every life lost to the disease over the course of a year.

Bill’s journey with melanoma began in March 2020 when he noticed a pea-sized lump in his neck. Doctors were not taking new patients at the time because of the pandemic, so Bill – a school teacher in Fredericksburg, VA – asked his school nurse if he should be concerned. Even though he was hesitant to visit a hospital at the time, and hoped the lump was just a swollen lymph node, Bill sat down with his family and they all decided that they needed answers.

Bill visited an urgent care clinic in late March, where he knew a nurse who was able to refer him out to an oncology practice the next day for a CAT scan. And within a week, Bill had a surgical consult to remove the lesion. Things were moving fast, especially at a time when many medical procedures had come to a halt, and alarm bells were starting to go off for him and his family.

Just ten days after his surgery, and about one month from his initial clinic visit, Bill got a call from his doctor informing him that he had metastatic melanoma with no primary origin, and that he should seek out a melanoma specialist if he wanted the best chance at fighting this cancer. Bill began calling various melanoma clinics multiple times a day, but hit many roadblocks due to the restraints imposed to stifle the pandemic. Eventually, Bill had some luck with University of Virginia (UVA) Health and was able to book a consult with oncologist Elizabeth Gaughan, MD. 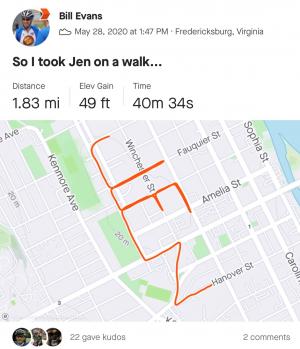 On the morning of his consult, Bill was surprised by a drive-by parade – 86 cars deep – of friends, loved ones, and community members sending him off on a positive note and lifting his spirits ahead of a potentially stressful day. Bill and his wife Jennifer took the two-hour drive to UVA together, hopeful that they would accept Bill as a new patient. “I had nowhere else to go. I was banking everything on this visit,” explained Bill.

Just as Bill and his family had hoped, Dr. Gaughan accepted him as a new patient. They scheduled a radical neck dissection with a surgical specialist at UVA just two weeks later to ensure full removal of the melanoma. “This was one of the biggest surgeries Bill ever had. And we were a bit concerned especially because it was in the neck,” Jennifer said of her husband’s surgery. Covid restrictions did not allow Jennifer to join Bill on any of his appointments.

Shortly after the tough surgery, Bill began his rehab and recovery. He was restricted to a walker for six weeks, a huge change of lifestyle for the active competitive cyclist. Still, Bill found a way to turn his predicament into a challenge and engage others. He started by spelling out words on his walking routes and posting them on Strava, a social network app for runners and cyclists, where others could offer encouragement and cheer him on as his body healed. “Having a great support network is pivotal in a cancer diagnosis,” said Bill. 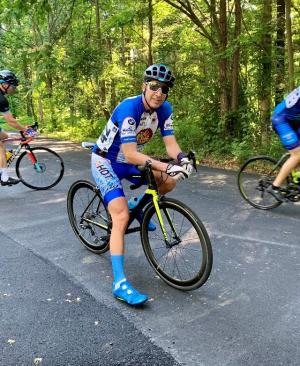 At the end of June – after taking time to recover from his radical neck dissection – Bill began monthly nivolumab infusions at UVA, all the while still trying to continue competitive cycling and participating in local bike races. “I quickly had to learn what I could and couldn’t do after infusions,” said Bill. Bill needed two to three days of full down time after an infusion, followed by another couple of days of getting back on his feet and only taking walks, all before he could get back on the bike. “Every single month was a reset on my fitness, over and over again.” After eight months of infusions, Bill participated in his first large-scale bike race.

In June 2021, after a full year of nivolumab infusions, Bill’s scans continued to show No Evidence of Disease (NED), and just two months later he went on to finish second in the Virginia Championship Time Trial bike race.

It was a whirlwind 15 months for Bill from start to finish, but he had no plans to slow down in cycling or in his involvement with the cancer community. Three months later in September 2021, in honor of Childhood Cancer Awareness Month and in memory of a student from his school lost to leukemia, Bill coordinated a cycling challenge to raise money. The success of the event, and experiencing the power of grassroots organizing, was eye opening for Bill. It made him wonder what else he could achieve.

Bill knew he wanted to continue to raise funds and awareness in support of cancer research following Childhood Cancer Awareness Month, but needed a direction. Reflecting on everything, he realized there were some areas throughout his journey where he wished he had more guidance: specifically, around exercise and cancer together. “When I first got my diagnosis, everyone around me couldn’t believe that ‘Healthy Bill’ had cancer. As an athlete, I am incredibly in tune with my body and diet. That really made me want to connect with similar patients and learn from them, but I wasn’t finding as much as I had hoped,” explained Bill.

This realization motivated him to start his YouTube channel, Pedaling to Beat Cancer with Bill, what he describes as “a year-long campaign to raise awareness, support the Melanoma Research Alliance, and document the challenges along the way.” There, he shares videos highlighting his training efforts towards his goal of cycling 7,200 miles – one mile for every life lost to melanoma yearly – as well as insights into his cancer diagnosis, treatment, and follow up care. Through his channel, Bill hopes to create a space where other athletes facing a cancer diagnosis might see themselves represented.

Along the way, other cyclists – some friends and some complete strangers – have joined Bill to ride alongside him, support the campaign, and motivate him to keep going. He has seen support on his Facebook fundraiser page from family, friends, community members, and people across the country. As of February 2022, Bill’s campaign has raised over $5,500 for MRA’s lifesaving melanoma research. “When I was looking for an organization to benefit, I came across MRA and brought it up to my cancer team at UVA, and they had nothing but amazing things to say. That, on top of the fact that 100% of donations go directly to research, was the final piece I needed for my campaign,” explained Bill.

Through all of this, Bill hopes to send a message on the importance of prioritizing a healthy lifestyle. “Trying to become healthy and fight cancer at the same time is really tough, but living your healthiest life beforehand can help better prepare you for what may or may not lie down the road,” Bill shared. “Athletes are often some of the first to go to the doctors and get checked when something doesn’t feel right. It was especially tough because of pandemic restrictions, but I knew something wasn’t right, so I persisted in finding answers.”

Often the first sign of melanoma is a change in the shape, color, size, or feel of an existing mole. However, melanoma may also appear as a new mole or a rapidly enlarging bump. If you notice a change on your skin, see your doctor. Don't wait.