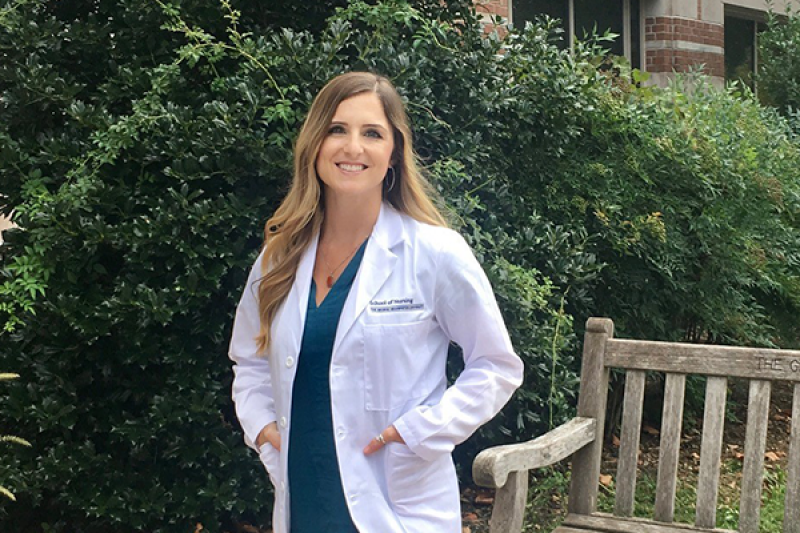 “I made a bucket list when I lived in Tanzania for four months. Number one on my list was to experience a miracle and I did—I witnessed my own miracle.”

Three years later in 2013, Lauren Alptunaer was playing soccer after work when her head suddenly started jerking repeatedly. Understandably unsettled, she ran to her team’s sideline, at which point, she could no longer speak and slowly lowered herself to the ground. She was having a seizure.

After an ambulance rushed her to the hospital, she suffered a second seizure. A CT scan showed she had a hemorrhagic brain tumor in her right frontal lobe, touching her motor cortex. Despite the traumatic news, Lauren remained upbeat and positive.

“I was 26 years-old—cancer never even crossed my mind.”

After transferring to Weil Cornell Medical Center, she underwent a craniotomy1 to remove the mass and relieve pressure. Two days later, on Valentine’s Day, she received lifechanging news in the form of biopsy results. Lauren had metastatic melanoma.

Overwhelmed by the diagnosis, Lauren kicked her mom out of the room.

“I had always been the strong one in the family and I wanted a moment to collect my thoughts.”

Despite the shock, Lauren kept her positive outlook, she admits possibly due to naivete and not fully understanding the severity of her diagnosis. In fact, she wasn’t informed that it was Stage 4 melanoma until she met her oncologist.

Weil Cornell did not have a melanoma specialist at the time, but one of her neurosurgery nurses strongly suggested that Lauren see an oncologist who specialized in melanoma. She recommended MRA-funded researcher Dr. Anna Pavlick, then a medical oncologist at New York University.

With her funky, African print pants, warm demeanor, and strong will, Dr. Pavlick made Lauren feel extremely comfortable from the moment they met.

“Dr. Pavlick is absolutely amazing and I completely trust her.”

Soon thereafter, Lauren noticed a small bump on her clavicle. A PET scan confirmed it as another tumor. No other melanoma was detected in Lauren’s body. Dr. Pavlick assured her they were going to fight it by finding the strongest form of treatment available and suggested enrolling in a clinical trial to do so.

For patients facing melanoma, clinical trials offer access to treatment approaches that may prove more beneficial than anything currently approved by the FDA. Learn more about clinical trials, find potential matches, and get other resources here.

Once enrolled, but before participating in the trial, Lauren underwent one session of Gamma Knife radiosurgery.2 Gamma Knife radiosurgery is a form of targeted radiation bursts precision-targeted by a computer directly at the site of Lauren’s earlier craniotomy. The targeted bursts were intended to ‘zap’ any melanoma cells that may have been missed during her surgery.

Days after her Gamma Knife session, Lauren looked in the mirror and realized the once-visible tumor was nowhere to be found.

Back in Dr. Pavlick’s office, Lauren learned she needed one more CT scan before beginning the trial. Just one hour after her scan, Dr. Pavlick reentered the room and delivered stunning news to Lauren and her parents.

“Lauren, I’ve never been able to tell any of my patients this, but you don’t have any cancer in your body,” said Dr. Pavlick.

To confirm the scan’s findings, Dr. Pavlick gave Lauren a physical exam and then suggested withdrawing from the clinical trial—as there now was simply no need.

After that extraordinary day, while Lauren needed no further treatment, she wasn’t out of the proverbial woods just yet. Less than two weeks later, she developed two infections in her brain and underwent a second craniotomy.

Her medical team could never identify where the melanoma originated in her body. While not common, this happens in about 3% of cases.3

Each time Lauren revisits her neurosurgeon for her regular follow-up appointments, he gathers all of his residents and medical students. He believes Lauren’s ‘miracle’ is the result of what he calls “the abscopal effect.” The abscopal effect, an exceedingly rare event, occurs when a patient’s immune system is activated by radiation therapy and is thereby able to recognize and attack cancer cells throughout the body.4 Essentially, the radiation awakens the immune system and it then fights off the cancer cells.

In fact, in 2020 MRA joined forces with the American Society for Radiation Oncology (ASTRO) to fund further research into the role of radiation therapies in the treatment of melanoma. Browse all MRA-funded grants here.

Now almost eight years with no evidence of disease, Lauren notes a silver lining to her melanoma journey—the experience stirred her passion for medicine. When she was in the hospital, her nurses were incredible and provided fantastic care. Intrigued by their work, she asked them nonstop questions throughout her stay.

Then, as fate would have it, while working as a nursing assistant in the Emergency Room and completing the prerequisites for nursing school, she met a first-year resident physician, who later became her husband.

After moving from Long Island to Washington, DC to attend nursing school at George Washington University—from which she graduated with honors—Lauren has now been a Registered Nurse for more than one year and loves her work and the many patients whose lives she impacts.

She now sees a dermatologist in DC, but confides that she will continue seeing Dr. Pavlick for as long as she can. She even sends Dr. Pavlick pictures of every major life update—her engagement, her new dog, and her graduation from nursing school.

“I will never leave Dr. Pavlick—she’s the best. I love the opportunity to change people’s lives the way she has changed mine.”

When reflecting back on her journey, Lauren realizes just how lucky she was. In addition to her ‘miracle,’ friends and family were always there to support her. For example, when first diagnosed, Lauren had just aged out of her parents’ health insurance and was a mere three weeks away from qualifying for her new employer’s plan. Medicaid ultimately picked her up, but it was her friends who stepped in, started a GoFundMe campaign on her behalf, and held several successful fundraisers to help pay for medical expenses.

“My community came together and rose up like I had never seen before.”

With treatment and school behind her, Lauren now turns her attention to helping the broader melanoma community and ensuring everyone understands that wearing sunscreen is a necessity.

“Just because you are young, doesn’t mean getting a base sunburn is healthy—that’s the furthest thing from healthy!”

She wants people to fully understand the damage melanoma can cause. Many falsely believe it simply stays on the skin, but the speed at which melanoma can metastasize is truly alarming.

Experts believe that 90% of all melanomas are caused by ultraviolet radiation from the sun or indoor tanning devices5 and, while treatments for advanced melanoma are improving rapidly, prevention and early detection are still the best treatment option.

As Lauren emphasizes, “there are severe consequences to not being smart in the sun!”