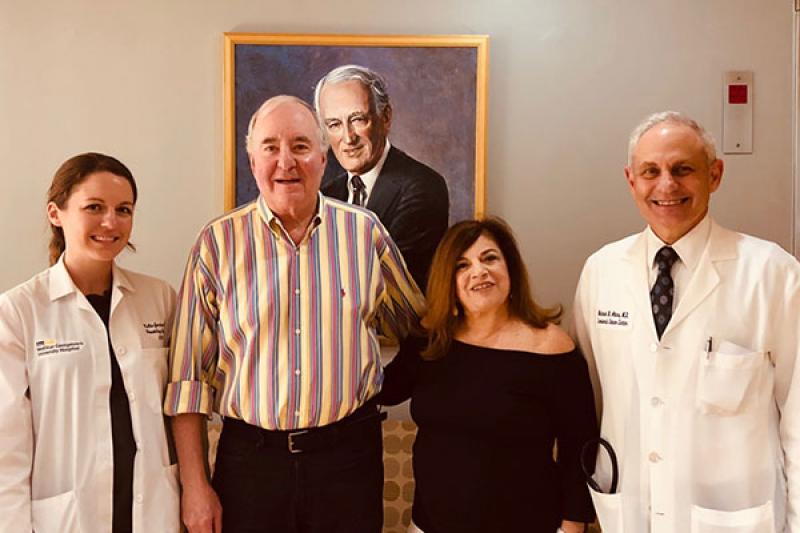 For David Marx, melanoma came into his life without warning. He had just come home from a nice evening out celebrating his retirement with his wife Linda and some friends, when he noticed his little toe was bleeding. “I had no idea what happened, so I stopped the bleeding, decided to see a doctor the next morning, and went to bed.” Little did he know that this moment would be forever seared into his memory – as a clear before and after – just like retiring from a 50-year career as a Financial Advisor.

When David dropped by his podiatrist, Dr. Polun’s office, he was disappointed to find him unavailable. He was seeing patients at the local hospital. Davidsent a photo to Dr. Polun of his toe, and minutes later Dr. Polun responded saying that he’d see David the next day despite it being a Sunday.

Fifteen minutes after David and Linda sat down with Dr. Polun they were given news that would forever change their lives. While a biopsy wouldn’t confirm it for a few days – Dr. Polun was certain that David’s cracked nail was actually acral melanoma.

“I was shocked. I thought melanoma was skin cancer,” recalls David. “I had no idea that it could be under your toenail.”

This is a common misperception about melanoma. While 90% of melanomas are caused by UV rays and occur on sun-exposed skin, melanoma can also develop in other parts of the body – such as our eyes, mucous membranes, or on the palms, soles, or under nails. Learn more about the types of melanoma here.

When David got home, he immediately got to work trying to understand what melanoma is and how it might impact his life. He and Lindaalso reached out to their network. Fortunately, Linda’s doctor of over 40 years introduced them to Dr. Michael Atkins, a medical oncologist at nearby Georgetown University and Chair of MRA’s Medical Advisory Panel.

With his medical team assembled, David and his doctors began to plan out his treatment. First, a surgeon would resect – or surgically remove – his melanoma. For David, in order to achieve an acceptable margin of skin unaffected by the melanoma, this also included his little toe. Then, the surgeon performed what is called a Sentinel Lymph Node Biopsy (SLNB) to determine if the melanoma had spread to nearby lymph nodes.

During a SLNB, doctors first identify the sentinel lymph nodes (the first nodes that your cancer is likely to have reached). They do this by injecting a radioactive solution, blue dye, or both near the tumor. You will then be put to sleep using a general anesthesia. In an operating room, your doctor will locate the radioactive or blue lymph nodes, surgically remove them, and then send them to a lab for testing. If melanoma is detected in your sentinel lymph nodes, but hasn’t spread beyond that, you have what doctors call Stage 3 melanoma.

In David’s case, the SLNB indicated that melanoma had indeed spread to lymph nodes in his groin region, so these too were surgically removed.

“While the surgeon believed that he got it all, Dr. Atkins suggested that I get adjuvant therapy just to be sure,” says David.

Adjuvant therapy is additional treatment given after surgery, with the goal of reducing the risk of melanoma returning. For patients with Stage 3 melanoma like David, up to 60% of patients will relapse within three years of surgical resection without adjuvant therapy.1 To address this growing need, the FDA has approved several options for melanoma adjuvant therapy.

For patients, the decision to move forward with adjuvant therapy isn’t as cut and dry as it may seem. That’s because all medical treatments have benefits and risks. In this case, while adjuvant therapy helps reduce the risk of melanoma returning it also exposes patients to medications that can cause side effects, require time out of your day, and may cause financial hardship.

Finally – up to 40% of patients who are eligible for adjuvant therapy may never experience a melanoma recurrence; meaning that they would be exposing themselves to the ‘costs’ of the treatment while receiving no benefit beyond peace of mind.

And while this decision has gotten easier as newer – and better – treatments with fewer side effects have become available – it still is a personal decision between you and your doctor.

Research focused on better understanding who stands to benefit the most from melanoma adjuvant therapy is a hot topic right now – but is not definitive. Meaning, that right now, there is no ‘right’ or ‘wrong’ decision – BUT it’s important that all eligible patients– in this case patients with Stage 3C melanomadiscuss the potential benefits – and risks – of adjuvant therapy with their doctor and be encouraged to make a decision that is right for them.

After talking with Dr. Atkins and his wife, David decided to move forward with monthly infusions of the immunotherapy, nivolumab. He began his adjuvant therapy about five weeks after surgery.

“The side effects I’ve experienced - itchiness and feeling tired have been a minor inconvenience,” says David. “I also know that I’m doing everything I can to keep melanoma from returning.”

For patients going through a similar situation, David offers the following pieces of advice:

David’s advice rings particularly relevant due to the evolving nature of adjuvant therapy in melanoma. While melanoma specialists – who tend to see patients at cancer centers – are likely aware of the latest melanoma research findings, adjuvant therapy may not be a common practice in community clinics where doctors treat – and have to keep up with research about all cancer types.

“Linda and I decided that it just wasn’t worth the risk. To me, health is very important.” said David. “The side effects were manageable and a little bit of inconvenience was worth living longer.”