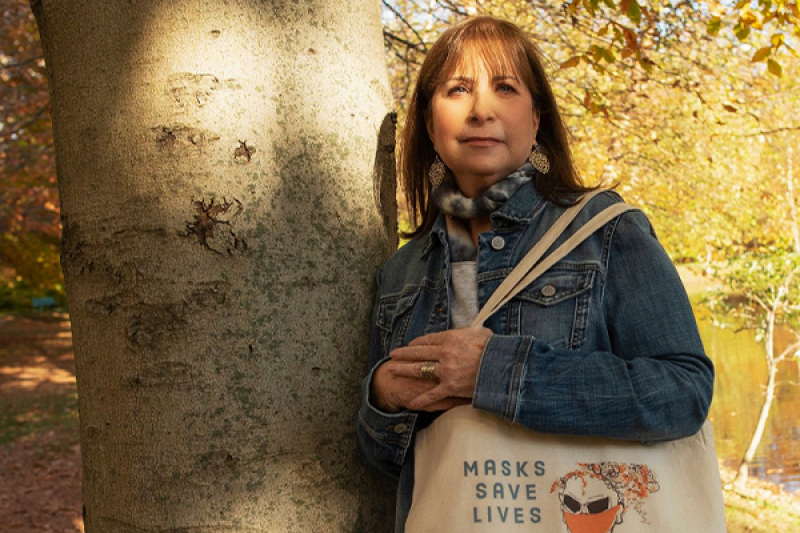 Barbara Premisler has lived by the motto “Faith over fear,” since her diagnosis with metastatic melanoma in January 2020. The phrase was introduced to her by a fellow cancer patient, and has given her strength and calm ever since. For Barbara, her journey with melanoma started with what she thought was tennis elbow. She saw her doctor, received steroid injections, but the pain persisted. Barbara pushed for more answers. Scans found a small lesion on her humorous bone that could explain the pain, but what was it?

Barbara explained of the initial stages of her diagnosis, “doctors couldn’t decide exactly what kind of cancer it was for quite a while.

Doctors then biopsied the lesion, about the size of an almond, to examine its cells under a microscope. This is how Barbara was diagnosed with metastatic melanoma.

Once determined to be melanoma, Barbara underwent surgery to remove the lesion and surrounding tissue. This also required the removal of bone from her arm and the insertion of a metal plate to preserve function. This was followed by one week of high-dose radiation to the site and she began two years of Opdivo, a PD-1 checkpoint immunotherapy, to reduce her risk of recurrence. 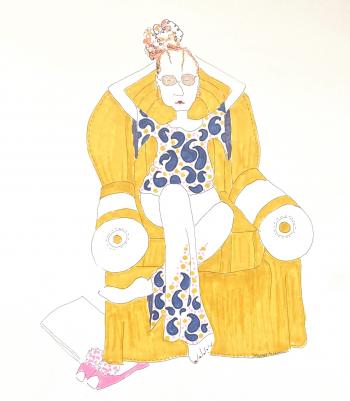 This whirlwind of a melanoma diagnosis and treatment was only made worse by COVID-19. Barbara underwent appointments with her care team and her immunotherapy infusions alone. “It was earth-shattering,” says Barbara. “If I was going through this pre-COVID, I would have been surrounded by friends and family every step of the way. Instead I had somewhat of a solo experience.”

It was also difficult for her to understand how she had ended up in this position. After having a melanoma in situ (stage 0) removed from her neck several years prior, Barbara believed she was in the clear as she continued to visit her dermatologist every three months and made sun safety a priority. “I felt like I did everything I was supposed to do,” says Barbara. “Taking care of my skin was always on my radar.”

Regular self checks and full-body skin exams with a dermatologist are very important for people with a history of melanoma and other skins cancers. That’s because melanoma survivors are at a 9-fold increased risk of developing another melanoma.

Following the initial shock of her diagnosis and the strain of facing treatments on her own, Barbara was faced with yet another hurdle. Her arm surgery had left it nearly immobile. Not only was this a problem for her daily functioning, it made it extremely difficult for Barbara to pursue her lifelong passion of art. “My arm had no strength, I couldn’t even write my name,” says Barbara. “I had to ask myself if I was ever going to be able to draw or paint again.”

Starting from scratch, Barbara slowly taught herself to hold a pencil and, more recently, a paintbrush. She started by simply writing her own name, then started doodling with magic markers. Progress was difficult, and at times even painful, but Barbara found a way to create her art.

One day, while on the phone with her doctor, Barbara sketched a character who would unexpectedly end up defining much of her recovery. “I was on hold with my doctor and I just happened to make a little sketch of this funny lady with funky hair and crazy shoes!” 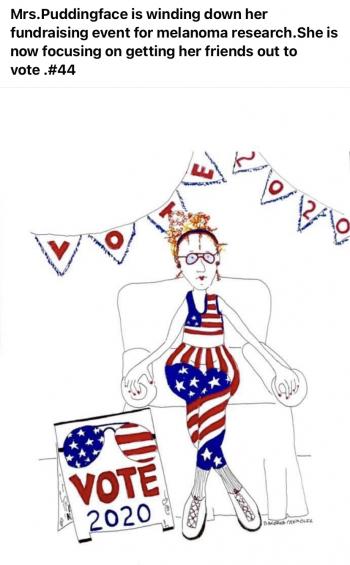 The character, who she coined Mrs. Puddingface, became an instant hit among her circle of family and friends. Every couple of days Barbara would share a new drawing of Mrs. Puddingface on her Facebook and Instagram, accompanied by a quirky caption. Her online circle quickly became enthralled by Mrs. Puddingface and looked forward to seeing what was on her mind or what she’d do next.

For Barbara, Mrs. Puddingface became an alter ego. When she first began her sketches, she didn’t realize how much of herself she would pour into Mrs. Puddingface. But with her melanoma diagnosis, treatment, and the isolation imposed by COVID-19 – Mrs. Puddingface became an important outlet and means of communicating with her loved ones. “It started off simple, like a sketch of her having a cup of coffee,” says Barbara. “But then it got a little more involved, and I started letting people into my psyche through my sketches of her.”

All of the hard work and time put into sketching Mrs. Puddingface was helping Barbara rehabilitate her arm, but also her mind. “When I draw I have to be relaxed and in the moment. I can’t be thinking about anything else or I’m not creative.” Through Mrs. Puddingface, Barbara found an outlet to let her process her feelings, channel her energy, and a way to briefly escape the pressures and stress of her diagnosis.

Experts agree, self-care – such as sketching, drawing, or even coloring – is an important part of your melanoma journey. Self-care can mean many different things depending on who and when you ask. Making time and space in your life to take care of yourself – whatever that may mean – is more important now than ever. Learn more about self-care here. 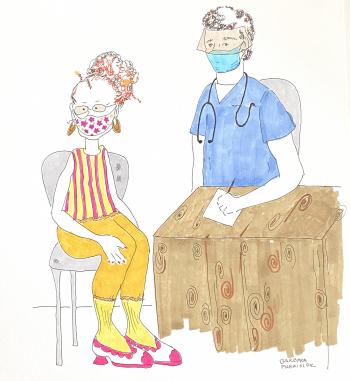 Outside of her art, Barbara leans on her family for support and positivity. Her husband of 46 years, two daughters, and grandchildren have been there for her from the beginning, and have enjoyed watching Mrs. Puddingface evolve and gain popularity. Barbara’s friends showed up for her in any way they could – by sending food, flowers, cards, and prayers. They also offered moral support to her husband as he navigated his role as a caregiver.

Barbara’s doctors have also been a vital support system for her. Barbara sings high praises of her care team - Dr. Beebe of University Hospital at Newark, Dr. Soffen of Princeton Radiation Oncology, and Dr. Nissenblatt of Central Jersey Regional Cancer Care Associates – who have all had a profound impact on her journey.

As Barbara recovered, she started to think about ways in which she could help the next person who would find themselves facing melanoma. Then it hit her – maybe she could raise awareness and money for melanoma research AND combine it with her art. Barbara turned to her Mrs. Puddingface drawings and decided to turn them into tote bags. Since September, she has now sold 100 bags – with all proceeds benefiting the Melanoma Research Alliance. “I found MRA while searching online, and was really impressed to see that 100% of donations support melanoma research,” says Barbara.

Thanks to the generosity of her many friends, Barbara was able to make a $1,500 donation to MRA. “I was blown away by the generosity that came pouring in,” says Barbara.

Barbara’s most recent scans show no evidence of disease. And while she still has months of treatments ahead of her, she is staying positive. “I’ve had a lot of lows. But I’ve also had faith,” says Barbara. “You can’t be afraid.”