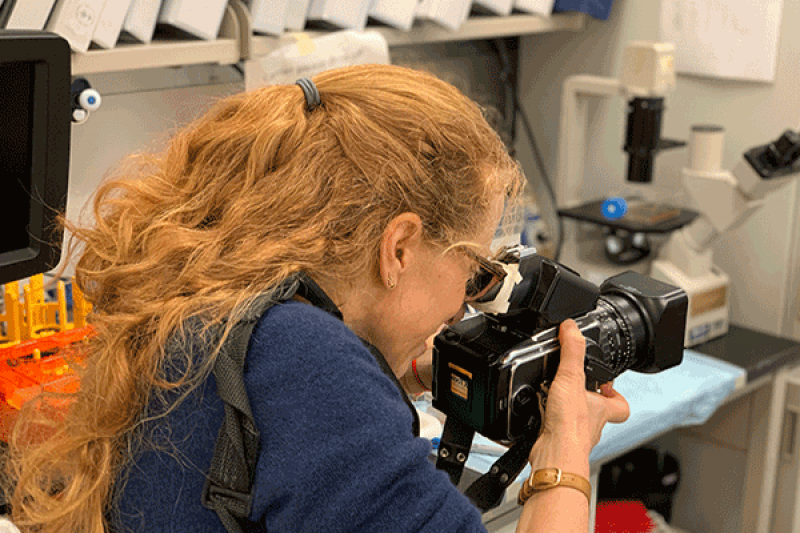 Measuring the progress of melanoma research isn’t hard. The numbers practically speak for themselves: 12 new treatments have earned FDA approval in the last decade, hundreds of clinical trials are actively enrolling or will soon begin enrolling patients, and death rates due to melanoma have declined by 6% annually on average for the last few years.

What’s harder to quantify – or to even put into words – is the individual impact that this research makes in the lives of patients and their loved ones. The human impact – the lives extended, saved, and even those lost – is an important testament to why melanoma research matters and why we have so much more to do.

It’s this often intangible, individualized human impact of melanoma research that Facing Melanoma Together, a series of black and white photographs, helps bring to the forefront. The photo series, created from a five-city tour, explores the impact and meaning of research for patients and their loved ones, and the undeniable truth that new treatment advancements are fueled through the unique partnership of researchers and patients.

Celebrated film-photographer and LA-based Lara Porzak crossed the country with vintage film cameras in tow to shoot the series. Porzak, a three-time melanoma survivor herself, specializes in capturing energy and emotion in stirring photographs while working only with black and white film.

"I know what it’s like to be told you have melanoma and to sit across from a doctor who puts hope back onto the horizon,” says Lara Porzak. "I believe the bonds formed from shared hope is one of the joys of being human. It’s these lifelines that I attempted to capture."

Each photo features a clinician or researcher with one of their patients or a patient advocate who has been impacted by their work.

“Even as a science-focused organization, we understand the power of stories,” says MRA President & CEO Michael Kaplan. “They say a photo is worth a thousand words and collectively this series is allowing us to talk about the power of research in an altogether new way by showing the dynamic relationships between patient advocates and researchers and the magic that happens when you bring them together.”

Throughout the project, Porzak trekked to countless exam rooms, research labs, and conference rooms where she took photos of 27 melanoma clinicians/researchers, 15 patients, and 7 loved ones. She used over 100 roles of vintage film and developed each image in her dark room. Through each of the photos – available online here – the human impact of the power of research and the tenacity of human spirit shines through.

“A project like this humbles you. I had no idea how moved I would be by making these photographs,” says Porzak. “I just lifted the lens and tried to capture the light. The magic was already there.”