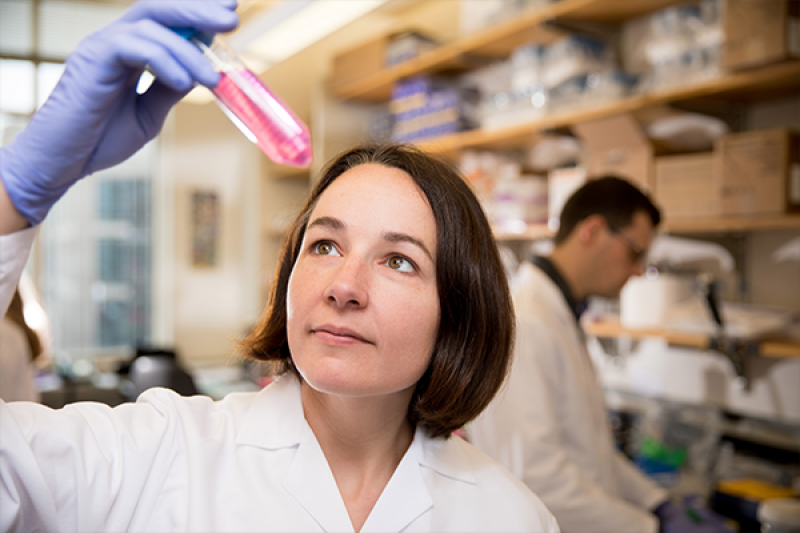 Modern immunotherapy, with melanoma as its poster child, is changing the way we treat cancer – for good. But, so far at least, it isn’t helping everyone. Many scientists believe that there isn’t a single silver bullet to unleash the awesome power of our immune systems – and instead – that the future of oncology is finding just the right combination of therapies that push and pull from different directions to multiply and enhance each other’s effectiveness.

This is easier said than done. While the right combination may shrink tumors, rally the immune system, and prime it for attack, the wrong combination could cause severe side effects or even counteract the effects of therapies that work on their own. Stephanie Dougan, PhD., is a principal investigator on MRA-funded research at the Dana-Farber Cancer Institute, and her work is focused on finding ‘smart’ combinations of immune and targeted therapies that give patients the best hope for success.

Theoretically, combining the benefits of tumor-directed targeted therapies with the immune boosting effects of immunotherapy make sense. Targeted therapies aim to target defects in tumor cells, without harming healthy tissue. This approach can quickly shrink tumors, and in doing so the dying tumor cells release molecules that help the immune system find and attack remaining cancer cells. Theoretically, one could then introduce an immunotherapy agent that would boost this attack and help patients achieve long-term, durable results.

“Unfortunately, cancer biology is regularly done using cell cultures which don’t have an immune system, so none of this was ever really studied,” said Dougan. Her lab is working to bridge this gap and has uncovered novel approaches that do just that and patients are already benefiting.

For example, in 2015, her lab was asked to examine an investigational targeted therapy to see how it affected a patient’s immune response. The experimental drug was already being tested in combination with PD-1-based immunotherapy in a phase 1/2 clinical trial – meaning, patient’s lives were on the line. Dougan quickly discovered that this particular drug actually blocked the activation of the immune system – not at all what researchers hoped. As a single drug, maybe this didn’t matter. But, when used in combination with immunotherapy, this could have been a deal breaker. Knowing that patients were already enrolled and taking this experimental combination, her team then looked at how this effect could be reduced by altering the dosing and frequency. Fortunately, they found that by adjusting the dosing schedule to introduce a short break – a drug holiday - the immune system could recover and patients could theoretically benefit from both the targeted therapy and immunotherapy simultaneously. The results from clinical testing of this new schedule are not yet available, but Dougan’s findings shed important light on this emerging area of study.

Dougan was first introduced to the promise of immunotherapy while in graduate school by Dr. Glenn Dranoff (a member of the MRA Scientific Advisory Panel and a past MRA-funded researcher). At the time, the idea that the immune system could be harnessed in this way wasn’t a popular idea. “I met with Glenn, and I knew that I had found my calling,” said Dougan. This was a formative period for Dougan in other ways too. Dranoff’s lab is where she found her calling, but it is also where she met an aspiring MD PhD student named Michael Dougan. “We connected over our joint love of tumor immunology and we later married.”

Months after Dougan’s wedding, melanoma and the power of immunotherapy hit close to home when a member of her family was diagnosed with stage IV melanoma. They were devastated, but knew the best chance of beating this cancer was for the patient to enroll in a clinical trial to get an experimental immunotherapy. Fortunately, the treatment was successful and over ten years later, Dougan’s relative remains melanoma-free.

MRA’s investment in Dougan couldn’t have been better timed. When she received the Anna-Maria and Stephen Kellen-MRA Young Investigator Award in 2015, it was her first grant. “MRA has been instrumental in supporting my work and getting my lab off the ground. It was my first grant that I received as a young investigator. MRA support has allowed my lab to grow from a team of 2 to a team of 19 people, and we now have multiple projects looking at enhancing the immune response to melanoma,” said Dougan.