Gail: Stage 4 to NED (No Evidence of Disease) Through a Clinical Trial 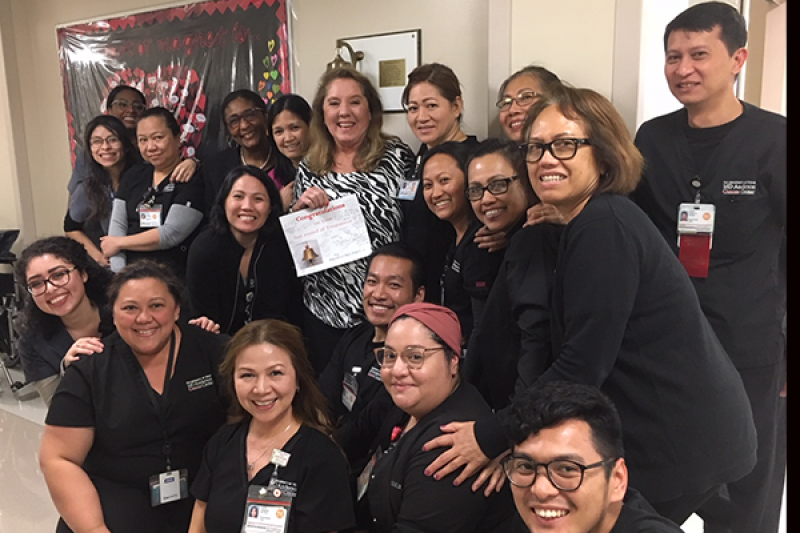 Gail was already on her way out the exam room door, following her annual physical, before she remembered to ask about a dry cough she’d had for about a week.

“Before I go – I have one more thing that’s bothering me,” she remembers saying.

Her doctor of over 30 years, Dr. Ron Hudson, carefully re-listened to her chest using his stethoscope. He still didn’t hear anything out of the ordinary and suggested that they keep an eye on it and revisit in six weeks.

Gail was persistent; something just didn’t feel right. “I feel a presence here,” she explained as she pressed up against her upper chest.

She and Dr. Hudson looked at each other and he replied, “come on, we are going to get an x-ray.”

Overall, it looked fine except for one concerning spot, but Dr. Hudson did not regularly review x-rays. He told Gail that the technician – already gone for the day – would review it first thing in the morning and that she should expect a call.

The next morning, Dr. Hudson called before Gail was finished with her tea. He’d already made an appointment for her to get a CT scan three hours later.

Immediately after the scan, she was called back to a conference room.  Dr. Hudson was on the phone. He calmly explained that the scans revealed a very suspicious area and that they needed to perform a biopsy. Two days later, Gail was scheduled for the procedure.

“At this point – I started to get nervous,“ says Gail. “It felt like everything was moving in fast forward and I started to panic.” 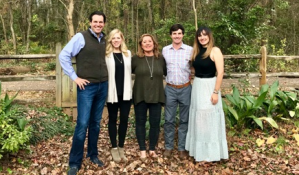 Her next stop, the local John B. Amos Cancer Center, had few answers. There, she was told that they dealt with common cancers – like breast or lung – but had little expertise with melanoma.

“This is the day that it hit me,” says Gail. “I was always the ‘healthy and vibrant friend’ within my group and I had cancer? I remember just asking the doctor: “if I didn’t do anything to treat this, how long would I have?”

The doctor’s answer took her aback: “If you don’t do anything, you won’t be with us in four months.

“I just lost it. I have three kids – and the youngest was four months away from graduating college,” says Gail. “That’s when I knew that my doctor, Dr. Hudson, had saved my life. He listened to me – and took my concerns seriously – and that’s why I had a shot to beat this.”

Gail’s first stop was at the Mayo Clinic in Jacksonville, Florida  – maybe they’d have a treatment to offer her. After, she chose to get a second opinion at Emory University in Atlanta. Finally, before making her treatment plan, Gail’s daughter, who lives in Austin, TX, encouraged her to also visit MD Anderson Cancer Center in Houston, Texas.

“I was completely overwhelmed as I poured over everything while at the same time trying to keep myself from going down the rabbit hole,” says Gail. “It’s a tough balance because you want to be informed, but there is so much you don’t want to know, too.”

At MD Anderson, Gail met MRA-funded investigator Dr. Adi Diab, MD who ultimately suggested that a clinical trial (PIVOT-02) testing the combination of nivolumab (Opdivo) with Nektar Therapeutics’ experimental agent Bempegaldesleukin (BEMPEG: NKTR-214) may be her best option. The trial (NCT02983045), was attempting to identify the best dosing regimen of Bempegaldesleukin when combined with other approved therapies, including nivolumab and ipilimumab. 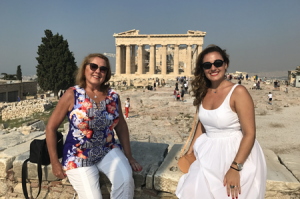 Bempegaldesleukin (BEMPEG: NKTR-214) is an investigational CD122-preferential IL-2–pathway agonist that leverages the clinically validated IL-2 pathway to stimulate an antitumor immune response. It is an experimental successor to interleukin-2 (IL-2), a melanoma treatment approved to treat melanoma in 1998, that works by increasing the growth and activity of white blood cells responsible for immunity. While effective in a subset of patients, the clinical use of IL-2 has largely been eclipsed by checkpoint immunotherapies that have proven effective in a greater number of patients. As such, BEMPEG was engineered to deliver a controlled, sustained, and preferential IL-2 pathway signal, with the goals of stimulating an antitumor immune response while minimizing toxicity. In other words, it was designed to deliver the same immune-system boosting benefits of Il-2 without the harsh side effects.

At first, unfamiliar with how modern clinical trials operate, Gail was concerned that she could receive a placebo, without any real treatment, or that she’d be testing something unsafe and would ultimately feel like a guinea pig.

Dr. Diab – through a lengthy in-office appointment and a couple of in-depth phone calls later that evening persuaded her otherwise.

“Dr. Diab was so good. He spent time with me explaining how everything would work,” says Gail. “He even suggested I get a second opinion about the trial itself – that really gave me confidence.”

Before agreeing to the trial, she once again visited Emory University to get their perspective on the trial Dr. Diab offered.

“The doctors at Emory agreed that if I was offered a place on Dr. Diab’s trial, that would be the best option,” remembers Gail. “I really appreciated the honesty – it made me feel so much more confident about my decision.” 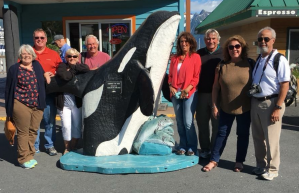 For the next two years, Gail would spend two out of every three weeks in Houston for the trial. She would undergo 33 infusions of Bempegaldesleukin + nivolumab and countless tests and scans, all while staying at a hotel near the hospital.

“The trial sponsor paid for everything – travel, hotel, everything. It made it so much easier to focus on getting better,” says Gail. “My children, brother, and friends also took turns staying with me – which gave me something to look forward to while away from home. It all adds up and makes a big difference.”

Her concerns about her quality of life and treatment side effects were ultimately unfounded. “Looking back, I did have some side effects – but they were always predictable. Within 48 hours after my infusion, I’d get flu-like symptoms. It was worth it.

In clinical trials of the experimental combination, flu-like symptoms were the most common side effect experienced by participants, followed by rash, fatigue, and itchiness. Bempegaldesleukin is also associated with increased risk of hypotension (low blood pressure). Overall, the rate of severe adverse events for the combination is similar to that of nivolumab monotherapy (taken by itself).

Gail was also able to keep working part-time – while home in Columbus, GA – and credits this to keeping her grounded “in the real world” while undergoing treatment. She also credits her family and large circle of friends who all went above and beyond to be supportive. 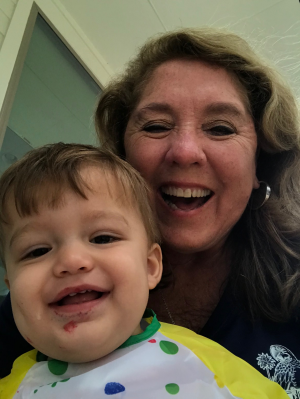 “I think it’s so important to have something – anything really – that isn’t cancer to stay focused on,” says Gail. “I saw my youngest daughter graduate college and was even able to continue traveling. Keeping as much of my normal life as possible really helped me.”

In addition to this, her care team at MD Anderson also suggested she see a counselor while undergoing treatments. Dr. Catherine Powers-James, also a cancer survivor herself, was invaluable to Gail throughout this process. “She was worth her weight in gold,” says Gail. “I think everyone who is going through this should talk to someone, even if you already have a strong support network around you.”

The best part of Gail’s clinical trial journey isn’t the amazing care she received at MD Anderson or the relatively mild treatment-related side effects, but that the experimental combination was working.

Within months her scans revealed that the treatment was working. Her tumors were disappearing and a year and a half after starting treatment, her scans showed no evidence of disease (NED).

Today, Gail has been ‘off’ treatment for over a year. Her scans – first every three months, now relaxed to four, and soon to six months – continue to show no evidence of disease. She continues to be a staunch proponent of clinical trials and for sticking up for yourself throughout the process.

“I’m the person who is always encouraging my friends to get a second or even third opinion,” says Gail. “It’s like buying a car – would you buy the first car you see at the dealership? Why do that with your health?”

Gail also encourages all people facing melanoma to do their homework and to write down questions in advance so you can have a productive conversation with your doctor. She also encourages people to bring friends and family with you – to be an extra set of eyes and ears. “Throughout this process, I felt like I knew just enough to be dangerous – but I was always prepared with fresh questions for my doctor so I could be in control of what was happening.’