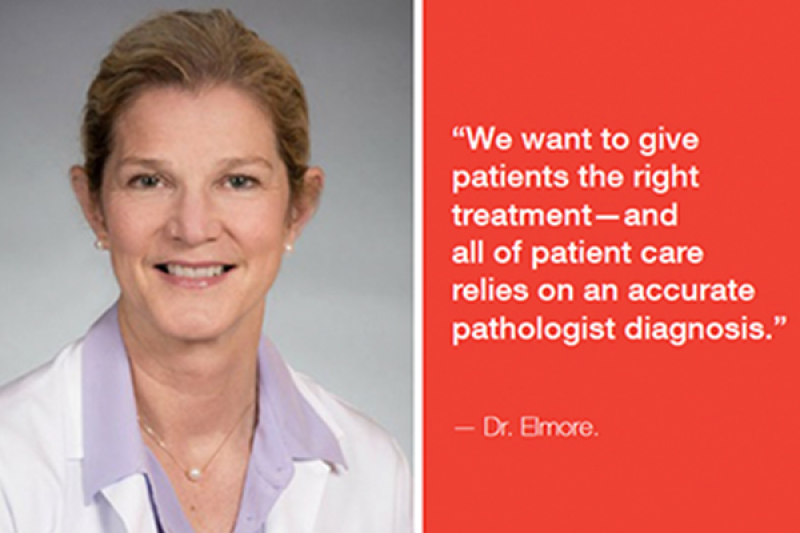 As an internist, Dr. Joann Elmore was taught to ask questions. Those questions led her to spend much of her career in breast cancer research where she found extensive variability among radiologists’ interpretation of mammograms. “Radiology data is subjective, just like art. You’re being asked to classify visual data,” Elmore says.

It wasn’t until she was on the receiving end of a Friday night phone call alerting her to a “suspicious” skin biopsy, however, did Elmore’s interest in melanoma peak. Elmore’s biopsy specimens were sent to two pathologists. “As a physician, I had always assumed a pathologist’s diagnosis was the ‘gold standard,’” she says, “however, I received two very different diagnoses on the opposite ends of the spectrum on my own skin biopsy: one said it was invasive melanoma and the other said it was benign.” As such, Elmore sent the specimen for yet another opinion, this one to a pathologist who had written textbooks on the topic and had decades of experience. His diagnosis landed somewhere in the middle and acknowledged that it was atypical, but thankfully not in the classification of invasive melanoma. More than a decade later, Dr. Elmore has had no recurrences.

Based on this experience, Dr. Elmore expanded her research from radiology to pathology. “Pathologists, like radiologists, are also looking at image data and I realized there was way too much variability, and I wanted to better understand why—and what we could do about it.”

Dr. Elmore received a National Institutes of Health (NIH) grant to study the accuracy of diagnostic screening and biopsy interpretation. The study looked at all melanoma-type biopsies and was able to capture how often there was variability in interpretation among providers. Slides were presented in random order to 187 pathologists who provided their diagnoses using an online histology data collection form. Months later, the same exact slides were sent to the same pathologists but in a different order. “There was less than 50% consistency among most of the pathologists and often they weren’t even consistent with their own initial diagnosis,” says Elmore. “This really showed me that there is an art to medicine and diagnosis is so critical.” Elmore emphasizes that this experience did not decrease her appreciation for pathologists but, rather, highlighted how difficult pathology is, particularly in melanoma and precursor lesions, and underscores the need for better diagnostic tools.

Thanks to the generous support of the Michael & Jacqueline Ferro Family Foundation, MRA issued three grant awards focused specifically on using artificial intelligence to better detect melanoma. Through one of these awards, Elmore is partnering with a world renowned computer scientist Dr. Linda Shapiro at the University of Washington who specializes in computer visualization of complex information, as well as leading pathologists around the globe to develop an artificial intelligence (AI)-based diagnostic system.

Elmore and her team are evaluating whether computers can assess cell size, shape, and other details from images of skin biopsies in order to help improve the accuracy – and consistency – of melanoma diagnoses. “For each skin biopsy, there can be hundreds of thousands of cells,” explains Elmore. This also sheds light on why melanoma biopsies are so complicated and challenging for pathologists and why AI, which can scan thousands of cells and readily cross-reference information, may improve the future of melanoma medicine.

“Although we are still in the early phases, this is critical work,” says Elmore. According to a report by the National Academies of Sciences, Engineering, and Medicine, improvements in the diagnostic process are a “moral, professional, and public health imperative.”

Indeed, a diagnosis is the building block on which all other medical treatment is based. On the other end of these biopsies are real patients: patients answering the late-night, anxiety-inducing phone calls; patients undergoing invasive surgeries; patients weighing their next clinical steps. Not all of these patients will seek out three opinions like Elmore did, but all of them deserve an accurate diagnosis.

Elmore’s research also showcases MRA’s commitment to working across fields to fund the most promising research and to recruit innovative researchers. Doing so injects fresh ideas that are needed to move the field forward and to raise the bar ever higher, so that today’s challenges can be tomorrow’s success stories.

“MRA creates and supports multidisciplinary collaborations,” says Elmore. “They get it. Science is better as a team approach and I’m looking forward to seeing what’s next.”