Imaging the Immune Response in Melanoma 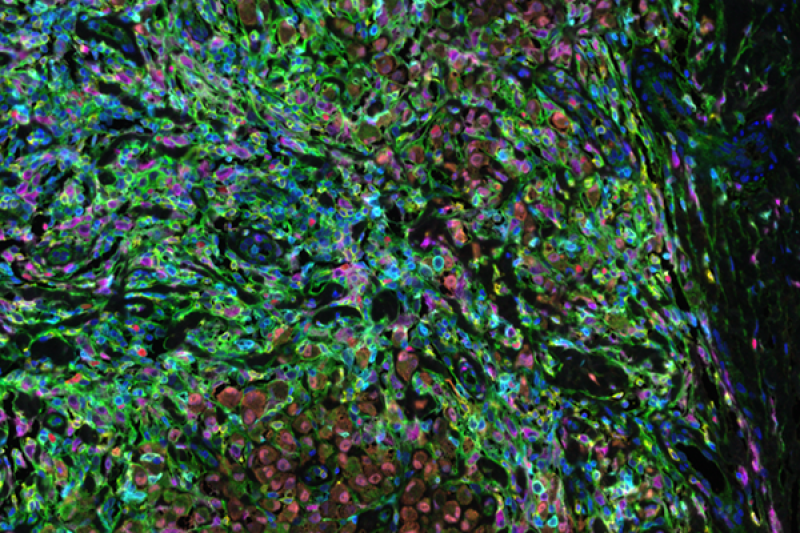 We are fortunate to now have effective immune therapies for many melanoma patients. But unfortunately, we also now know that these treatments can often cause serious side effects, like diabetes and colitis, among other reactions. Consequently, there has been a push to develop a way to detect early on if these drugs are working and worth the risk of the side effects they can cause, let alone their high expense. MRI’s and other traditional means of predicting whether a cancer treatment is working cannot be depended on because these rely on seeing if there is tumor shrinkage. But often in patients responding to immunotherapies can take months to detect and in some cases, tumors initially expand, falsely indicating progression (pseudoprogression) due to the infiltration of immune cells into the tumors.

There may soon be a way out of this conundrum, several presenters suggested at the 2019 MRA Research Retreat. These researchers are working on the frontlines of imaging the immune response to tumors so as to better predict if immunotherapies are working. The novel hybrid techniques they use to image key immune cells and how they interact with tumors include genetically engineered llama antibodies in PET scans, mass spectrometers combined with single-cell imaging, and dozens of stains for different immune cells combined with analytical techniques used by astronomers to make sense of the massive amounts of imaging data on the cosmos.

Immune responses to tumors change over time so to understand their dynamic nature better, you need live animals in which you can image their immune cells and how they interact with tumors over long periods, stressed Hidde Ploegh of Boston Children’s Hospital. To do that imaging, he enlisted the help of llamas, who have unusually small antibodies that can be easily modified and attached to an imaging agent for PET (positive electron tomography) such that they seek out and light up specific key components of the immune system in tumors. By using such “nanobodies” in mice with melanoma, he has been able to distinguish a true response to cancer immunotherapy from a pseudoprogression of the tumor. He has also shown that one of the earliest responses to these treatments is killer T cells distributed throughout the tumor, whereas non-responders show a more varied distribution, much of which occurs in peripheral regions of the tumor. “In responder animals, the tumor is penetrated to the core by CD8 [killer T] cells, but in nonresponders there isn’t that full penetration,” Ploegh stressed. He also found in responders massive increases in a molecule that attracts immune cells and can help them home in on tumors.

Ploegh has developed human versions of his mouse nanobodies that are ready to be tested in the clinical setting and can be used to image key immune cells in both the tumor and lymph nodes with good sensitivity, he said. He also developed a nanobody that can be used to detect melanoma metastases. “Our approach is ready for translation to the clinic. We just need an industrial partner to make it good to go,” Ploegh concluded.

Sean Bendall of Stanford University reported on his work imaging an immune response to breast cancer from preserved slices of tumors that he is currently applying to melanoma. He combined the mass spectrometer’s ability to detect minute quantities of specific substances with single-cell imaging to reveal patterns in the types and quantities of immune cells that infiltrate breast tumors in biopsy samples. He found two distinct patterns: tumors that were diffusely infiltrated by immune cells, and tumors that had more compartmentalized infiltration. “In one, the immune cells looked like grains of sand in the tumor, while within the compartmentalized ones, it was more like islands of immune cells in the tumor,” he said, stressing, “Not all immune infiltration is equal—it’s not just a matter of getting immune cells into tumors, but how they are infiltrated.”

Bendall found those patients whose tumors showed the compartmentalized pattern of infiltration were more likely to survive. He also found this compartmentalized pattern of response was conserved throughout an entire tumor, regardless of from what region the sample was taken. He next plans to apply his imaging technique to see whether there are distinct differences in immune infiltration in melanoma tumors between responders to immune therapies versus non-responders. “We expect our data will help us understand why we get responses in some patients and not in others,” Bendall said.

That’s also the ultimate goal of Janis Taube, who reported on her efforts to use traditional fluorescent staining of tumor slices, but in an innovative way. Instead of staining for just a few cell types, Taube uses multiple stains “for the basic roll call of immune cells present and also lymphoid structures, tumor cells, and new vasculature,” she said. That staining combined with an innovative stacking technique enables her to simultaneously view dozens of parameters. Because of the large data sets generated by this technique, she then uses sophisticated tools and processes borrowed from astronomers to analyze her results so she can superimpose and make sense of one set of findings on top of another.

“We have used the astronomy experience to generate high- quality, three-dimensional maps of the local interactions between melanoma and immune cells that will provide critical insights,” Taube said.

Because each tumor slide is linked to patient information such as survival and response to immunotherapy, researchers can use this information to help determine what features in pre-treatment biopsies predict response to therapy. “We’ve taken what we’ve learned in terms of imaging the whole sky to image whole tissue sections and are starting to drill down to individual cells and subcellular structures and patterns in data that can resolve even more structures. Our goal is to have perfect prediction to match patients to appropriate therapy,” Taube concluded.

Image Credit: The image used for this article was captured by Dr. Janis Taube.