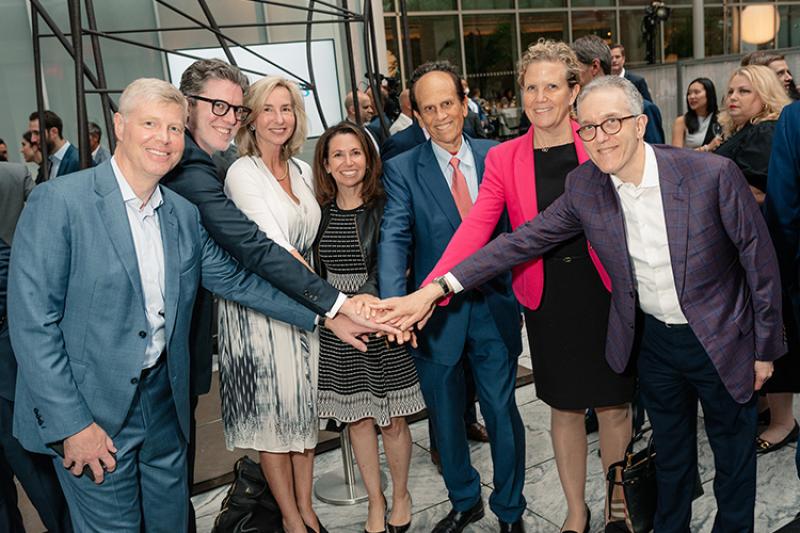 On Thursday, June 16, 2022, more than 900 people from over 100 firms from the leveraged finance and private equity communities came together for the Leveraged Finance Fights Melanoma (LFFM) benefit and cocktail party. Hosted at the Museum of Modern Art, the event raised a record breaking $3 million for the Melanoma Research Alliance’s (MRA) mission to advance the world’s most innovative and promising melanoma research.

“Each year, I continue to be amazed by the community’s response to this event and the mission it supports,” says LFFM co-founder and MRA board member Jeff Rowbottom. “LFFM has become a signature event for the finance industry, and it plays a critical role in advancing cancer research that is literally saving lives, including mine.”

LFFM funding supports cutting-edge melanoma research that has helped patients with all types of cancer live longer, fuller lives. Treatments first pioneered in melanoma are now being used to treat patients with over 30 other cancer types.

LFFM was founded in 2011 by Jeff Rowbottom (Iron Park Capital) and Brendan Dillon (Veritas Capital) – both melanoma survivors. Since its founding, LFFM has raised more than $19 million for MRA, the largest nonprofit funder of melanoma research. Since its founding in 2007, MRA-funded investigators have been deeply involved in every breakthrough in melanoma research, including the approval of 15 new therapies.

“The leveraged finance and private equity communities are some of the biggest advocates for MRA and our mission to cure melanoma,” says MRA CEO Marc Hurlbert, PhD. “The funds raised from this event will further accelerate the MRA research agenda and the continuation of faster cures, new treatments and lifesaving breakthroughs.

Photos from the event are available here.