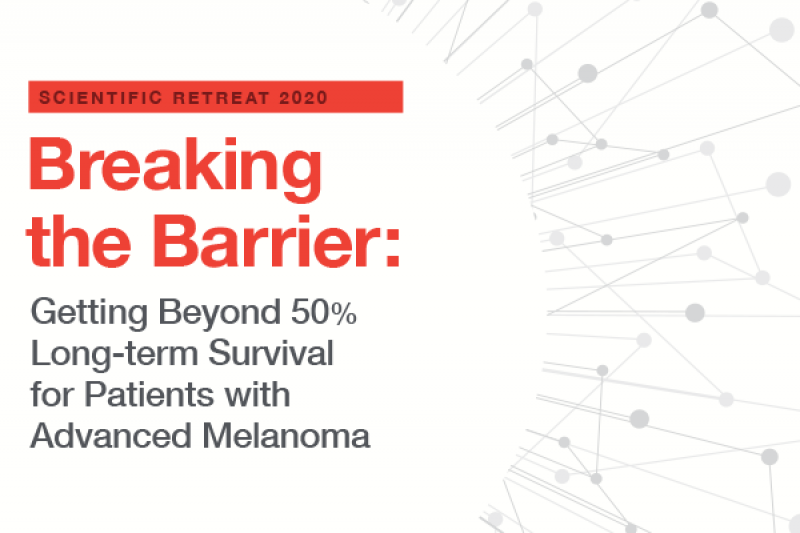 The last decade has been one of substantial progress and hope for many melanoma patients, researchers, and clinicians. With 12 new therapeutic approaches now approved to treat melanoma, many advanced-stage patients are seeing their tumors shrink or disappear, and are experiencing renewed hope for a brighter future.

Given this exceptional progress, researchers, clinicians, patients and their caregivers, as well as representatives from industry, biotech, non-profits, and government gathered at the 2020 MRA Scientific Retreat to hear updates on the latest research, to discuss how to keep this incredible momentum going into the next decade, and to build new collaborations.

While some newly approved treatments are helping far more patients with advanced melanoma hit the five-year survival threshold, there are still too many patients who don’t respond to these treatments, and others who may respond, but don’t maintain a durable response. The bar has been raised for many, but further work is needed to raise the bar for more melanoma patients.

Driving this need home, Grace Wenzel provided opening remarks via an address delivered from her hospital bed, recorded the night before the Retreat. Twenty-three-year-old Grace relayed how current treatments put her melanoma into remission for several months, but now were no longer working. She pleaded with researchers to continue to strive towards a melanoma cure. “I have no idea what things are going to look like for me even one week from now. But I am determined to keep fighting.” 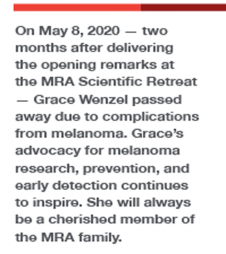 Delivering the Retreat’s opening scientific keynote, Jedd Wolchok of Memorial Sloan Kettering Cancer Center started by saying, “We are determined and by Grace’s side to help find better answers to her disease.” He and other researchers at the retreat reported on exciting results that they think will help maintain the amazing momentum. By assessing ways to improve existing therapies, including using them in combination or using them in patients with earlier stages of disease, as well as exploring totally new treatment avenues, researchers are optimistic that fewer patients will find themselves in circumstances similar to Grace. While many researchers focus on treatment, others are pursuing ways to prevent new melanomas or to detect them at an earlier stage. The hope is that by the end of this decade, if not sooner, patients like Grace will not be in the hospital, but will instead be leading normal lives after successful melanoma treatment. Better yet, there may be fewer melanoma patients altogether because of successful and widespread melanoma prevention programs. 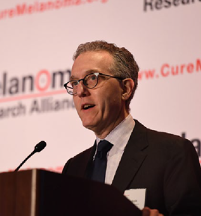 Immunotherapies, Combinations & Dosing: Currently, thousands of clinical trials are testing new combinations of immunotherapies in melanoma and other cancers. Most build on already approved checkpoint immunotherapies by adding to them vaccines and other new agents designed to rally more components of the immune system to enhance overall response. Others combine them with standard chemotherapy, targeted therapy, or radiation therapy. “Combination therapy will be necessary for immunotherapy to achieve its full potential,” Wolchok stressed. The experimental combination therapies build on the greater understanding of immune responses to tumors that has blossomed from basic research. “These are rational immunotherapy combinations based on rational preclinical science, rather than just throwing things out and seeing what sticks because there are too many possible combinations to try,” Wolchok noted.

He added that investigators are also becoming more refined in the dosing of immunotherapies as they gain a better understanding of how the therapies work on a molecular level. Given the severe adverse reactions often caused by immunotherapies, “There shouldn’t be a one-size-fits all assumption about dosing,” he said. Wolchok described one study (NCT03122522) testing “adaptive dosing” that uses an innovative imaging agent to detect how patients are responding after just two doses of combination ipilimumab + nivolumab therapy. Building on the understanding that responses to combination ipilimumab + nivolumab often continue even if ipilimumab is discontinued, continuation of the combination therapy in the trial was based on whether a response to therapy is seen after just two doses. Only patients who do not appear to be responding well — as detected by medicalimaging — continue to receive combination therapy. Patients whose tumors are responding switch to nivolumab only. This approach offers the potential to further mitigate some adverse events.

Wolchok also highlighted that researchers are developing sensitive genetic tests that can detect whether melanoma cells are still present in the blood of patients who appear to be in remission (often referred to as liquid biopsies), and therefore may warrant continued treatment despite no evidence of disease.

Novel Therapies that Reduce Off-Target Effects: Other researchers, such as Rizwan Haq of the Dana-Farber Cancer Institute, are striving to find a way to design targeted therapies that avoid harmful effects on healthy cells. Molecularly targeted treatments inhibit growth- promoting enzymes called kinases, but in many cases, healthy cells also depend on these enzymes, leading to toxic side effects. Haq’s team identified a compound  that inhibits an enzyme required for the survival in both melanoma and healthy cells. However, this drug is uniquely active in melanoma cells since it requires a chemical reaction to turn it ‘on’ that can only happen in tumor cells. Although further testing is needed, the compound could inhibit a kingpin growth pathway for melanoma cells not targeted by current drugs, without causing undue harm to normal cells. Haq found the compound suppressed the growth of melanoma cells in mice without causing harmful side effects for the animals, but these findings have yet to been verified by human tests. Haq noted that similar inhibitors for other growth promoting pathways in melanoma could be developed into safer drugs if they also are activated in this manner.

Immunotherapy Beyond Checkpoints: Investigators are also pursuing personalized treatments that rely on removing tumor-killing T cells from a patient, expanding them in culture, and then reinjecting them back into the patient, often referred to as TILS (Tumor-Infiltrating Lymphocytes). Similarly, another “adoptive T cell” approach is to remove a patient’s T cells and genetically engineer them to hone in and attack tumor cells better. Both types of experimental treatments are currently being tested in clinical trials and may be especially useful to treat patients with rare subtypes of melanoma, which tend not to respond as well to current therapies.

Scientists are also exploring ways to call more types of anti-tumor immune cells to action. Spread of a tumor after responding to immunotherapies often occurs due to the outgrowth of tumor cells that lack the highly specific antigens T cells have been trained to attack. Immune cells called neutrophils and natural killer cells may be able to prevent such escape, Wolchok and Nick Huntington of Monash University both reported. This may be particularly true for so-called ‘heterogeneous tumors,’ which are composed of cells sporting different antigens on their surface — meaning that cells within the same tumor or in different tumors in the same person may look different to the immune system. Checkpoint immunotherapies work by releasing the breaks on T cells, spurring them to action. But as Wolchok noted, “T cells by themselves are only enough to kill tumors when you don’t have to worry about heterogeneity. When you do, you need the neutrophils for an anti-tumor response. Neutrophils are underappreciated—they are considered poor stepchildren in immunotherapy—but they deserve our attention.” Using a mouse melanoma model, Wolchok presented data suggesting that neutrophils create an inflammatory environment that works in conjunction with T cells to eliminate heterogeneous tumors.

Natural killer (NK) cells may also be a key target to pursue as studies in mice reveal that these cells prevent melanoma from metastasizing when injected intravenously, presumably by being less selective than T cells in attacking tumor cell antigens. Huntington pointed out that although T cells outnumber NK cells in tumors, there are more NK cells that can specifically recognize and target melanoma cells in tumors, compared to T cells. Underscoring a potentially tumor-fighting role for these cells, patients with high numbers of NK cells tend to have more favorable outcomes. Because they drive T cells and other immune cells to infiltrate the tumor, he added, NK cells are likely to make melanoma more responsive to already approved immunotherapies. Huntington’s recent research has revealed key molecules that control natural killer cells’ ability to target and kill tumor cells, and efforts are underway to develop drugs that act on these molecules so as to create a new type of immunotherapy for melanoma that could be used singly or with already approved treatments.

Thorsten Mempel of Massachusetts General Hospital reported on another way to potentially enhance existing immunotherapies. He found a molecular pathway in mice for converting T regulatory cells — immune cells that typically suppress an immune response to tumors — into T cells that promote tumor killing. If these findings can be translated into a safe drug that stimulates this pathway, it could be used to enhance current immunotherapies by lifting another brake on the immune system. 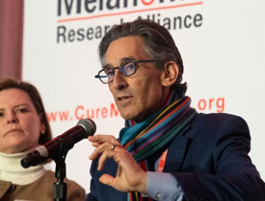 How Lifestyle Can Impact Treatment: Though immense progress with new treatments has been made, and further research offers additional hope, it is widely understood that treatment is only one part of the equation. Lorenzo Cohen, a melanoma survivor and research psychologist at the University of Texas MD Anderson Cancer Center stressed the need to focus research on lifestyle factors that can help improve patient response to treatments. “Love, support, sleep, exercise, and diet impact all the cancer hallmarks we’re trying to harness as drug developers,” Cohen pointed out. He cited studies indicating that chronic stress suppresses immune responses, while exercise increases immunity.

Diet is also important to melanoma patients receiving immunotherapies as preliminary studies show patients with the highest fiber in their diet are more likely to respond to them, likely because of the effects of fiber on the gut microbiome. Much of this research is still in its early stages, however, so it’s challenging to come up with definitive lifestyle recommendations for current patients, he noted. Cohen stressed that, “Engaging patients is key to maximizing the benefits of treatments and getting the best long-term response.” He suggested using technology, such as streaming, video chatting, and online groups to help patients make healthy lifestyle changes. “We can use technology to beam into patients’ homes information on cooking and exercising,” he noted. 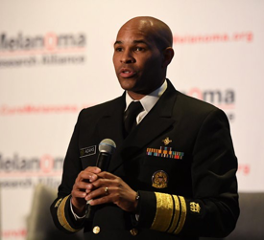 Bringing Melanoma Prevention to the Forefront: Even more progress could be made if melanoma was prevented from occurring to begin with, Susan Swetter of Stanford University pointed out. Noting that sunburns heighten the risk of developing melanoma, she said “If we enacted a comprehensive prevention program aimed at reducing ultraviolet light exposure, we could reduce melanoma by 20 percent and reduce $3 billion of costs in treating melanoma.” Swetter noted that unlike in European countries, sunscreen ingredients haven’t been improved in the US in the past several decades, and there are no full-spectrum sunscreens on the market. She pointed out that research is underway to develop other agents beyond sunscreen to prevent melanoma that reduce the damage induced by sunburns.

US Surgeon General Jerome Adams suggested restricting access to tanning facilities is also key to reducing melanoma incidence. He pointed out that although some tanning facilities have been limited by local or state laws, a national law in this regard is still needed. “As glad as I was that there was top notch research to help my wife deal with a deadly melanoma, I still wish I could have gone back in time and told her not to get into that tanning bed,” he said at the MRA Patient and Advocate Forum.

Adams recently updated the Surgeon General’s 5-year plan to emphasize prevention of skin cancer, but he reported that a million high school students continue to use indoor tanning devices, and each year half of adults and high school students get sunburned. He suggested more public health measures aimed at preventing sunburns, including increasing shade in playgrounds, recreation areas, and other public spaces, and increasing public education efforts about sun safety so that sun protection becomes a habit. “No matter how many great drugs there are for melanoma, that won’t change the fact that for every person we cure, 10 more are going to get it,” he stressed.