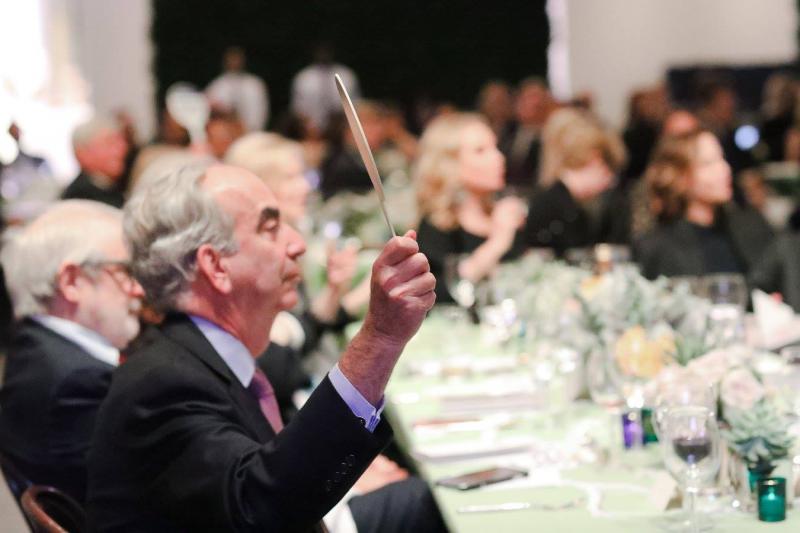 Normally, when people are at a Sotheby’s auction, they come to bid on beautiful and rare art. On Nov. 2nd, however, more than 240 people came together at Sotheby’s Headquarters in New York City to raise their paddle in the fight against melanoma. Together, participants raised over $20 million to further advance melanoma research.

The event, generously hosted by Sotheby’s, celebrated the ten-year anniversary of Melanoma Research Alliance (MRA), the research it has accelerated, and the lives saved. Over ten years, MRA has invested $88 million—and leveraged an additional $89.5 million—to support research projects across 15 countries in support of MRA’s mission to end suffering and death due to melanoma.

“We are enormously pleased by the generosity of MRA’s supporters who have made this event and MRA’s first ten years such a success,” said Debra Black, MRA co-founder and chair. “Through the ongoing commitment and support of our many allies and partners, MRA has been on the forefront of accelerating research and saving lives of people touched by melanoma.”

After cocktails and an exclusive viewing of Sotheby’s Impressionist & Modern and Contemporary art, guests enjoyed a seated dinner and benefit auction where guests made bids to support future MRA research. During the dinner, the power of MRA-funded research was made clear, with testimonials given by melanoma survivor and MRA board member Mary Jo Rogers who told the crowd: “I can’t say enough about MRA. They saved my life. They really did.”

Guests also heard from Stephanie Dougan, Ph.D, a researcher at the Dana-Farber Cancer Institute, who received a MRA Young Investigator Award in 2015. Her work focuses on using novel animal models to discover immune system-related drug targets for melanoma and other cancers. “The Young Investigator Award from MRA provided me with my first grant and with its help, my lab grew from 2 people to 18,” said Dougan.

The funds raised will support transformational Team Science and Young Investigator research awards. Six donors each committed $900,000 to support MRA Team Science Awards, which serve as the centerpiece of MRA’s research portfolio by fostering innovative and collaborative research by multidisciplinary teams. Paddles were also raise to support an additional 11 Young Investigator Awards, which recruit and support the next generation of melanoma researchers by attracting early career scientists with novel ideas into the field.

While the spotlight was on the top donors, MRA’S research portfolio is funded through the support of thousands giving at all levels. These donors know, because of the generous support of MRA’s founders, 100% of their donation goes directly to research; with no administrative, development or staffing costs incurred by donors.

“The progress we’ve seen in the last ten years in melanoma research is unprecedented, but we still have more to do,” says MRA President & CEO Michael Kaplan. “The funds raised from this event will allow us to move even closer to our goal of finally curing melanoma.”