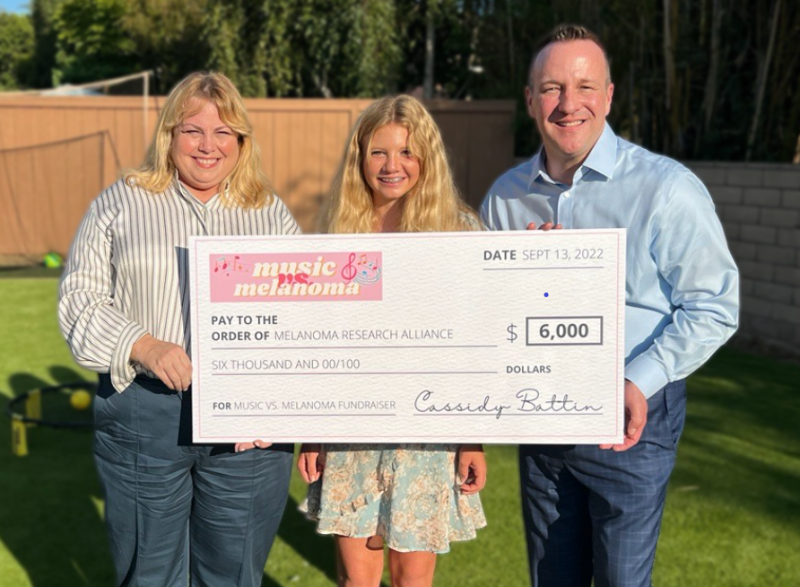 Cassidy Battin, an 8th grader from Carlsbad, California, and her family are no strangers to melanoma. Her great aunt sadly died of uveal melanoma, a rare subtype that forms in the eye, when Cassidy was younger. Her grandfather also had melanoma, along with several other loved ones in the family. An estimated ten percent of people with melanoma have a family history of the disease.1

This personal connection to melanoma was Cassidy’s inspiration when she was tasked with planning a fundraiser for her summer leadership program. The leadership program, part of her local YMCA, required Cassidy to write and submit an essay, interview with several women in leadership, form a team, and plan a benefit event.

Looking to her own passions and interests as a guide, Cassidy decided to host a benefit event around music. She plays the drums in her all-girl band Valkyrie with several of her friends, so this felt like a natural fit. Things began to fall into place as Cassidy worked out the logistics. The event – coined Music vs. Melanoma – was planned for July and would be held in her backyard.

Community Building Around a Cause 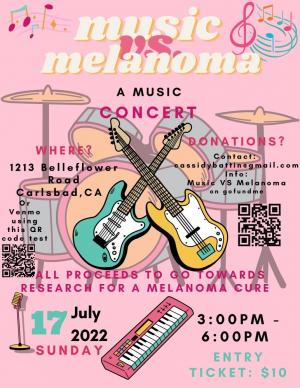 In preparation for the fundraiser, Cassidy created a flyer for the event and advertised it around town and on social media in the hopes that it would garner interest. To her excitement, a local high school band reached out wanting to take part. Cassidy also ventured downtown to pitch her event to potential sponsors. In addition to scheduling an impressive slate of bands, she also planned a silent auction to help raise funds for research.

As Cassidy spoke with her neighbors and local business owners, she learned just how prevalent melanoma is in her community. “I met so many people with a connection to melanoma just like my family,” she said. Cutaneous melanoma, or melanoma of sun-exposed skin, is the most common type of melanoma and one of the most common cancers diagnosed in the United States. It is estimated that about 1 in 50 Americans will be diagnosed with melanoma in their lifetime.2

Leading up to the event, Cassidy had several musical acts of varying genres scheduled to play, including her own band, her dad’s band, her uncle, and the high school band who saw her event flyer. She also received support from various local businesses in the form of donated goods and gift cards that would be raffled as part of the silent auction.

Raising Funds and Awareness of Melanoma

It was finally time for the Music vs. Melanoma fundraiser. Cassidy, with the help of her summer leadership team of seven girl, set up tents, chairs, raffle prizes, and food and drink stations throughout her backyard. She created banners for each band, as well as a slide show to educate the crowd about melanoma and thank sponsors and donors. Cassidy welcomed the crowd from the stage, thanked them for their support, explained her summer leadership program, and shared why she chose to support melanoma research. She also explained how melanoma has touched not only her family, but many other families across her community and the country.

"We live in California where the sun is always shining, so we are all at risk," said Cassidy. "My grandpa was diagnosed with melanoma - and he is in the crowd today because he caught it early and only needed surgery. People of all ages need to be aware of this cancer," said Cassidy. 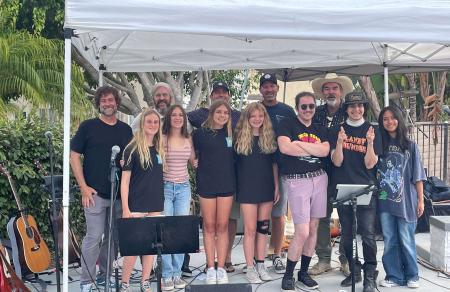 Everyone enjoyed themselves while the bands played, and by the end of the night, Cassidy raised over $6,000 for research. The event was not only successful because of the amount raised, but also because it spread awareness of melanoma. “I wanted to raise awareness of melanoma and sun safety,” explained Cassidy. “And also show that melanoma research needs more funding.” Sharing this message was extremely important to Cassidy, especially because her community is on the California coast, an area where sun exposure and rate of skin cancer diagnoses is extremely high.

As a conclusion to her summer leadership program, a panel of judges will review Cassidy’s event against nine others and select a “Leader of the Year.”

Presenting MRA with a Check

In the aftermath of her Music vs. Melanoma event, Cassidy reached out to the Melanoma Research Alliance (MRA). “I did a lot of research on melanoma organizations. MRA matched perfectly with what I was looking for because 100% of donations go to research,” Cassidy said. In connecting with MRA’s Chief Executive Officer, Dr. Marc Hurlbert, and President & COO, Stephanie Kauffman, Cassidy explained her fundraiser and the desire to present a check with her donation to the organization.

In mid-September, Marc and Stephanie met with Cassidy and several of her bandmates, friends, and family in Carlsbad to receive her donation. “It was an honor to meet Cassidy and accept her donation on behalf of the Melanoma Research Alliance,” said Marc. “It is inspiring to see the younger generations get more involved with melanoma awareness and sun safety at such a crucial time.” In fact, melanoma is one of the most common cancers in young adults – especially young women.3

“I learned a lot about melanoma while planning this event,” said Cassidy. “I hope it inspired other people to do the same as me.”

Are you interested in becoming a melanoma advocate? Consider hosting an event or creating an online fundraiser for MRA!