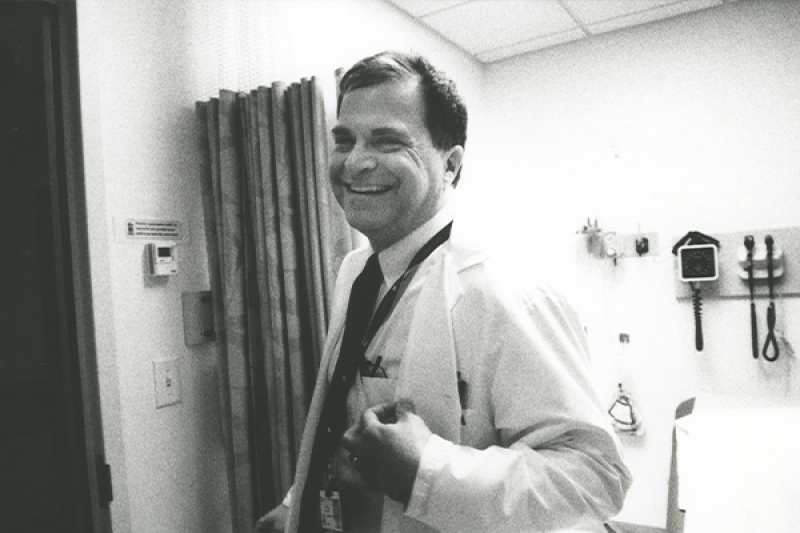 Every revolution needs trailblazers—people who restlessly and relentlessly search for paths forward. At MRA, we’re fortunate to partner with innovative trailblazers who are guiding the entire field of melanoma further, in areas such as the application of artificial intelligence in early detection of melanoma, the tumor microenvironment, and the microbiome.

One such trailblazer, in the area of bringing immunotherapies to patients, is two time MRA-funded investigator Dr. F. Stephen Hodi, Professor of Medicine at Harvard Medical School and Director of the Center for Immuno-Oncology and at the Melanoma Center at Dana-Farber Cancer Institute.

The son of an engineer, Hodi grew up in Ashland, Massachusetts intrigued with solving puzzles and excited about biology. He was no stranger to hard work—or compassionate care—his days were filled with school, then hockey practice, and finally home to care for his elderly grandparents.

At medical school and beyond, Hodi has taken the path less traveled—a path that often requires curiosity and unfettered persistence. At the start of his career, immunology was a much sparser field—taken less seriously than other areas of oncology. There were also just two primary diseases studied—kidney cancer and melanoma—whose tumors were believed to be immunogenic, meaning that they elicited an immune response. Moreover, the research and treatment landscape for melanoma, and particularly metastatic melanoma, was bleak.

But no good fight is easy.

Hodi found both a clinical and laboratory mentor in melanoma, and “dove right in,” he recalls.

By the early 2000s, treatment for metastatic melanoma was primarily chemotherapy and high-dose IL-2. Survival was just 6-to-18 months. Then came MRA-funded investigator and Scientific Advisory Panel Member Dr. Jim Allison’s Nobel Prize-winning work. “It changed the way of thinking in how we can manipulate the immune system by taking the brakes off,” says Hodi.

T cells are “soldiers,” helping the immune system fight viruses and abnormal cells like cancer. “Brakes,” otherwise known as the protein CTLA-4, turn T cells off once they have successfully killed off an attacking pathogen. Allison’s breakthrough work discovered how to “release these breaks” to overcome the immune system’s reluctance to attack tumors. 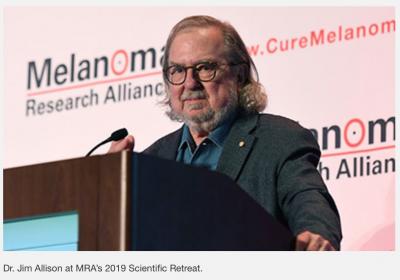 The drug Allison designed was ipilimumab (Yervoy®), which blocks the CTLA-4 checkpoint.

Hodi went on to run one of the first clinical trials with ipilimumab, then known as MDX-010, and later led the phase III registration trial. This pivotal trial demonstrated a survival advantage and led to the FDA approval of ipilimumab —the first checkpoint inhibitor approved globally. With “the breaks off,” hundreds of millions of T cells are released to attack cancer tumors, and once turned on, the cells stay that way—working even after treatment has stopped.

“It took a whole group of clinical investigators and concepts to come together to bring that first proof of principle to fruition,” says Hodi, “but that opened up the door for other investigators and industry to get interested in the field.” This includes research on other immune system “breaks,” such as PD-1 and PD-L1.

Since Hodi began that first trial of ipilimumab in 2004, there is now an entire class of checkpoint inhibitors. These breakthroughs in melanoma have also had an impact on patients with other cancers in a really short period.

“The first proof of principle came out of melanoma, but the biology showed that it was generalizable to other cancers. Now you have impact in lung cancer, kidney cancer, Hodgkin’s disease, neck cancer, liver cancer, and breast cancer among others. We now understand immunology better in patients and tumor immunology because of this,” explains Hodi.

The melanoma treatment landscape has since expanded to include:

“For melanoma now, with combination, approximately 50% of patients can do well long-term. We’re still collecting data, but it’s a tremendous feat compared to where we were just a few years ago. Patients can live with their cancer and can even have complete responses,” says Hodi.

Indeed, significant progress has been made but Hodi emphasizes that there is still work to do. “It’s not helping everyone, and we’re trying to understand why and trying to figure out novel, newer pathways, newer targets, newer understanding of the tumor and tumor environment. A big part is understanding not just the tumor cell but the cells that surround it and how they interact with one another. Understanding how those interactions occur will, hopefully, help develop better and newer treatments in the future.”

This will include the study of nearby tumor cells, such as

“There are a handful of tools that exist to try our best to turn this into a chronic disease, at least, and prolong patients’ lives that didn’t exist a mere 10 years ago. In the span of drug development, it seems like light speed for quality development," says Dr. Hodi.

Hodi, in particular, is interested in learning how these cells may be manipulated in future therapies.

“I think we’ve made great advances,” he says. “In some areas, things may have plateaued a bit, but I remain hopeful in the current world we’re living in of big data, of artificial intelligence, foundational knowledge, that though the hurdles may be a bit higher, we can still make tremendous impacts in the future by bringing things together and continuing to work as a community.”

As the largest non-profit funder of melanoma research worldwide, MRA is committed to searching out and supporting current and future melanoma research trailblazers such as Dr. Hodi. Learn more about MRA’s pioneering research awards at CureMelanoma.org/Grants.

This article first appeared in the 2020 MRA Annual Report.