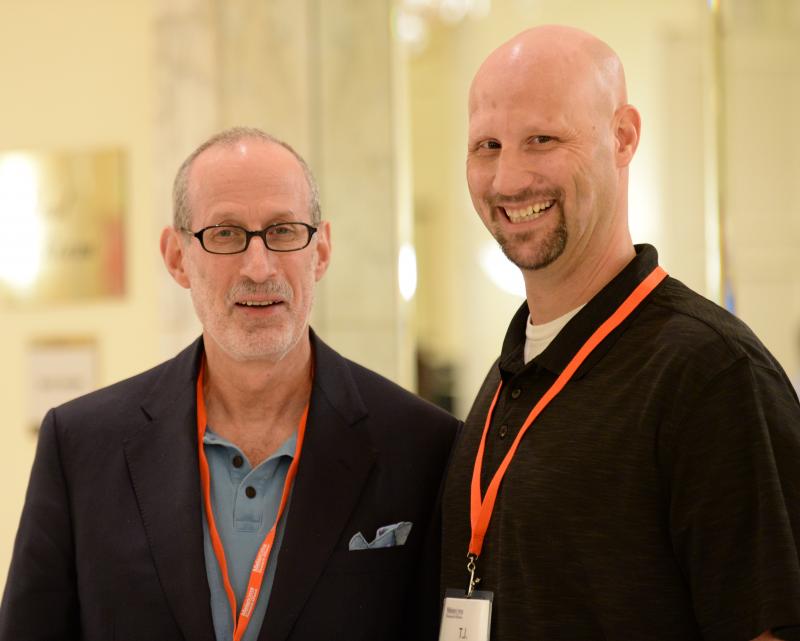 “If you were a 37-year-old, had two young children, and wanted to see your family grow up – what would you do?”

In August 2012, T.J. Sharpe walked into the emergency room with a fever. He’d been ill for a couple of days and didn’t want to get his four-week old son sick if he could avoid it. Sixteen days later, he left a full 30 pounds lighter and with a stage IV melanoma diagnosis.

He never had felt the black cloud of cancer over him before. In fact, he thought he dodged the bullet 12 years prior when he was diagnosed with stage 1b melanoma. Since then, he’d been cautious, protecting himself from the sun. Despite this, he now had tumors in both of his lungs, his spleen, liver, and small bowel.

Floored by his diagnosis and facing his own mortality, Sharpe was stunned when the oncologist told him that he’d be shocked if he survived two years. He wanted to be there for his wife and see his two kids grow up. The future felt bleak, and he and his wife quickly “realized that the existing standard of care just wasn’t an option,” said Sharpe.

Two things worked in Sharpe’s favor. First – he understood the transformative power of oncology clinical trials and wasn’t afraid of them. He’d previously worked in the pharmaceutical industry as an Information Technology consultant, and wasn’t apprehensive about clinical trials, knowing they were the place to find treatments that could give better responses than what currently existed. Second, he had a rock-solid support system that included friends and family. In fact, one friend researched and created a ‘short list’ of promising trials for him to consider. A wave of new treatment approaches had just started to pick up steam—ipilimumab and vemurafenib gained FDA approval for metastatic melanoma just the year prior in 2011—but very few people outside of a core group of melanoma doctors and advocates knew how big of a game changer these new approaches were.

Sharpe was determined to find the best treatment possible, so he got four separate ‘second’ opinions. He eventually found himself four hours from home at Moffitt Cancer Center in Dr. Jeff Weber’s office. Weber, a member of the MRA Grant Review Committee, was the first researcher who offered Sharpe a spot in a trial.

When determining what trial was the best fit, Sharpe asked: “If you were a 37-year old, had two young children, and wanted to see your family grow up – what would you do?”

Sharpe enrolled in a trial examining ipilimumab in combination with tumor infiltrating lymphocytes (TIL), a type of Adoptive Cell Transfer therapy. While ipilimumab and TIL Therapy were both promising treatments, Sharpe was the first person to get the combination in this sequence, and there were no guarantees that either treatment, or the combination, would work for him. Months later, some of his tumors had shrunk but others were still getting bigger. Sharpe and his doctor agreed it was time for plan B.

Plan B came in the form of an ongoing trial of pembrolizumab at a local cancer center just four miles from his Fort Lauderdale home. His first clinical trial didn’t work as expected, but this time he was lucky. Within 12 weeks, his tumors had shrunk by 50%. Today, Sharpe shows no active signs of cancer, and remains on the trial to monitor the effects of stopping the medication.

Since the start, Sharpe has documented his journey by publishing a blog at www.philly.com/patient1 where he tries to be both detailed while being digestible. “When people get a metastatic cancer diagnosis they have no idea what’s happening to them. They get so much information, but we don’t have the knowledge we need to make sense of it for some time. I try to bridge this divide,” says Sharpe.

Sharpe tells other people going through this, that “there are really smart people who are doing amazing things to get people like me and you – us – to live better and longer lives.” He hopes that his blog gives people hope and encourages them to take charge of their own health and to seek out their best treatment option.

Sharpe credits accessing the best treatments possible and keeping his spirits strong as critical to his survival, but wishes he knew more about what cancer would mean for those he loved. “I wish I knew the toll that cancer takes on everyone around you. It’s not always a bad thing, but cancer changes people, and not just the person who has it. I’m fortunate that so many people who love me were willing to adjust their lives so I could get healthy. It’s really all you have,” says Sharpe.