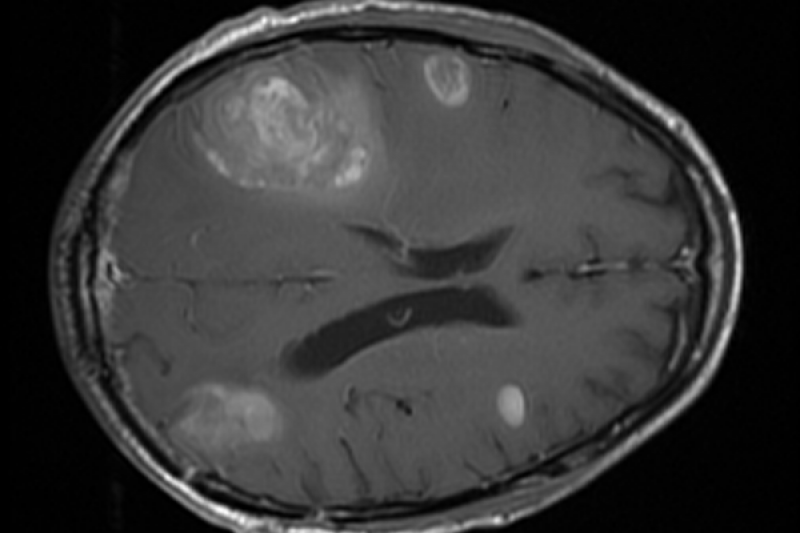 Brain metastases (mets) are a frequent and often deadly problem in patients with advanced melanoma. Nearly 40% of patients with metastatic melanoma have brain mets at diagnosis, with an average survival of only 4 months, suggesting a crucial need for treatments that can rid the brain of these tumors1,2. But new cancer treatments are rarely tested in patients with active brain mets. This is largely due to concerns about whether these patients will have side effects unique to brain mets, and poorer outcomes that may negatively weigh against otherwise positive clinical benefits. Another potential concern is whether the drugs will even penetrate the brain, which has a fortress-like ability to keep substances from entering it.

Fortunately, MRA-funded researchers are making headway in understanding brain mets and how to best treat them. Reporting from this exciting research frontier, three investigators at the 2018 MRA Scientific Retreat presented their findings on how the unique biology of the brain supports brain mets, what predicts whether brain mets will respond to treatment, and what new therapies might be especially effective at destroying these tumors.

Evaluating the Effectiveness of FDA-Approved Therapies in Treating Brain Mets

Because patients with brain mets are frequently excluded from clinical trials, clinicians do not fully understand how patients with brain mets respond to even FDA-approved drugs. To help overcome this, Dr. Michael Davies of the University of Texas MD Anderson Cancer Center studied the response of melanoma patients with brain mets to treatment with dabrafenib plus trametinib. This targeted therapy combination blocks specific proteins that fuel the growth of the approximately 50% of melanomas that contain mutations in the BRAF enzyme. The average progression-free survival of patients in the study was 11 months, approximately half the time of what patients without brain mets can expect who are given the same treatment. Notably, tumors in patients’ brains often progressed, while tumors outside the brain did not. “The treatment didn’t work as well in the brain as outside the brain,” stressed Davies, who was puzzled by this finding, and conducted two additional studies to find out why this was so.

These follow-up studies compared tumor biopsies taken from a patient’s brain mets and compared them to other tumor samples from the same patient. The research suggests that brain mets tend to have an overactive tumor-fueling growth pathway that is not directly targeted by dabrafenib and trametinib. Moreover, immune system profiling indicated weakened anti-tumor immunity in brain mets compared to those in other sites, suggesting that cancer immunotherapies may also be less effective in the brain. Altogether, Davies’ studies highlight the need for continued research to evaluate the effectiveness of already approved therapies in treating brain mets and reveal potential therapeutic vulnerabilities.

Whether immunotherapies can shrink melanoma brain mets, and what biomarkers relate to such an effect, is also an under-explored territory. In a small study reported by Dr. Lucia Jilaveanu of Yale University, pembrolizumab reduced the size of brain mets in approximately 25% of melanoma patients treated. This quarter of patients also experienced significant shrinkage in tumors located outside of the brain. Jilaveanu suspects that using combinations of treatments might improve the relatively low response rate, and that biomarkers may predict which patients will respond, allowing clinicians to target treatments to those patients.

Jilaveanu’s team then examined brain met samples removed from patients prior to treatment with pembrolizumab. Compared to patients whose disease progressed while on treatment, responders’s brain mets had higher numbers of tumor-fighting T cells, and their brain mets also produced more PD-L1 molecules, which is part of the molecular pathway targeted by pembrolizumab. She also found that patients with brain mets who responded to pembrolizumab also experienced a reduction in the amount of edema, or excess fluid accumulating in their brains. Edema can be disruptive, and at times deadly, for patients with brain mets, and there was concern that immunotherapies might aggravate it. But at least in Jilaveanu’s study, this proved not to be the case. “This should lessen concerns of using these treatments in these patients,” she said.

To discover such response biomarkers, the Jilaveanu’s team examined samples of brain mets removed from patients prior to treatment with pembrolizumab. They discovered that compared to patients whose disease progressed on treatment, most responders had higher numbers of tumor-fighting T cells in their brain mets, and their brain mets also produced more PD-L1 molecules, which is part of the molecular pathway targeted by pembrolizumab. Also encouraging is her finding that patients whose brain mets responded to pembrolizumab also experienced a reduction in the amount of excess fluid accumulating in their brains. Such edema can be disruptive, and at times deadly, for patients with brain mets, and there was concern that immunotherapies might aggravate it. But at least in Jilaveanu’s study, this proved not to be the case. “This should lessen concerns of using these treatments in these patients,” she said.

Dr. Manuel Valiente of the Spanish National Cancer Research Center focuses his research on the cellular environment surrounding brain mets in an effort to understand how this ‘tumor microenvironment’ allows brain mets to develop and progress. He soon realized that though many tumor cells arrive in the brain, only some become metastatic tumors large enough to be detected on a scan. “Metastasis is not just a matter of getting there—the real picture is more complex,” Valiente said. He then set out to explore this complexity by studying both animal models of melanoma and brain met biopsies.

This research uncovered that star-shaped brain cells called astrocytes are present in the tumor microenvironment of brain mets and secrete molecular signals that trigger tumor growth. When Valiente blocked this signaling in mice with melanoma or lung cancer, he found it reduced the number and size of brain mets. He then tested an experimental drug that inhibits the same molecular pathway in a small number of patients with brain mets. A majority of these patients experienced a reduction in the tumor burden in their brain, whereas no substantial reductions were seen in the size of tumors outside the brain, highlighting the likely different underlying biology of brain mets compared to other sites. “We are excited about these results and hope to start a clinical trial of the inhibitor soon in cancer patients,” Valiente said.

Because the studies conducted by Davies, Jilaveanu, and Valiente all included relatively small numbers of melanoma patients, their findings will need to be verified in larger cohorts of patients. But the glimmers of insight into brain mets should ultimately help treat patients with these tumors. “If we can identify molecular patterns in brain metastases, we can exploit them therapeutically,” Valiente stressed.