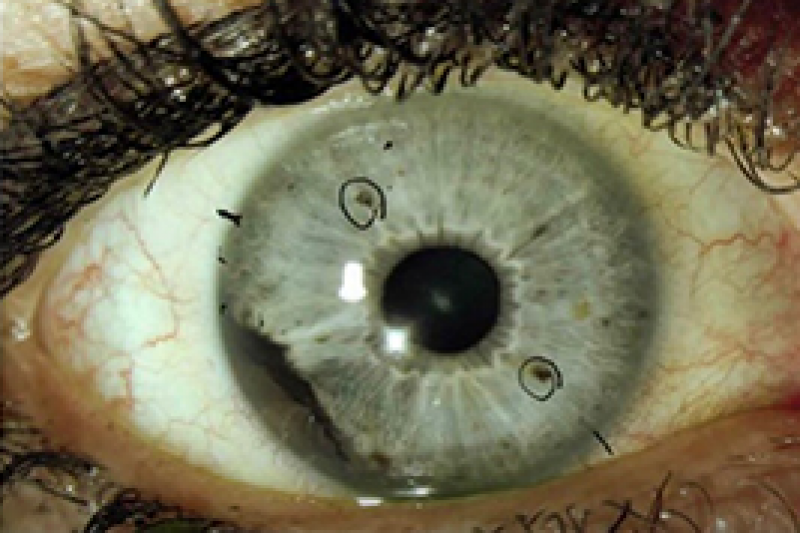 Melanoma in the eye, called uveal melanoma, is rare. In fact, only about 2,500 people are expected to be diagnosed with it this year across the United States. Uveal represents about 5% of all melanomas diagnosed each year. So, when dozens of people from two towns in North Carolina and Alabama were diagnosed with the rare cancer alarm bells sounded. Adding to the intrigue, experts don’t know what causes uveal melanoma.

Dr. Marlana Orloff, a medical oncologist from Thomas Jefferson University and MRA-funded investigator on the new Helman Family-MRA Team Science Award, became interested in finding out just what was happening.

First, what is Uveal Melanoma?

When we talk about melanoma, it’s easy to forget that cutaneous – the most common variety that forms on the skin – isn’t the only game in town. If you asked a group of people to describe melanoma, most – if not all – would describe an oddly-colored mole on the skin with rough edges that grows over time. These people wouldn’t be wrong, but some types of melanoma like acral, uveal, and mucosal don’t look like this.

“Other than the fact that they look the same under a microscope, they couldn’t be more different,” says Orloff. “In the way that they present, spread, and are treated – uveal melanoma is a distinctly different disease.”

Some patients with uveal melanoma have no symptoms and are diagnosed during a routine eye exam. Others get flashes, floaters, or other vision problems that bring them to their local eye doctor. In either instance, patients are referred to a specialist who is able to make the diagnosis. The outlook is good if the melanoma has not spread to other parts of the body.

Primary uveal melanoma is often treated with radiation therapy, and it is effective, Orloff says. However, in up to about half of all patients, the melanoma returns and spreads to other parts of the body.

"The most common site that we see the cancer turn up, most often within the first three to five years, is in the liver, and once the disease metastasizes to the liver, there is no cure," Orloff says.

Patients with uveal melanoma have not benefited from the same explosion in treatment advances that those with cutaneous melanoma enjoy. Immunotherapy with checkpoint inhibitors and BRAF-focused targeted therapies aren’t effective for most uveal patients.

"Even though people want to lump it in with skin melanoma, we know that it's a very different disease, and a lot of the treatments for skin melanoma don't work for eye melanoma. There's really nothing officially FDA-approved to treat eye melanoma," says Orloff.

What is a Cancer Cluster?

When reports of a suspected cancer cluster surface, investigators respond by gathering additional information to determine if the event is an actual cluster or simply a coincidence. In epidemiology, a cluster is defined as a higher-than-average number of cases of a disease in a defined area over a specific period of time. Cancer clusters are concerning because they suggest that people are being exposed to a cancer causing substance, called a carcinogen, in some way. If Orloff could determine that this was a cluster, the state governments involved would move forward with an investigation of their own with additional resources.

According to the National Cancer Institute1, “most suspected cancer clusters turn out, on detailed investigation, not to be true cancer clusters. That is, no cause can be identified, and the clustering of cases turns out to be a random occurrence.” 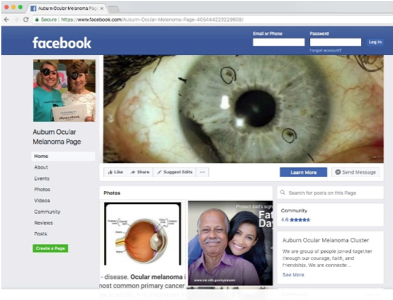 In early January the reports started to pop up about ‘clusters’ of a rare eye cancer in local, then regional, and finally national media outlets. However, this was not the first time the unique accumulations were reported on. Orloff first reported on 5 patients in Huntersville, NC and 3 patients who went to Auburn University in Auburn, AL in as ASCO publication in 2015. Since then there have now been  reports of potentially dozens of people who went to Auburn University in Auburn, AL, and 18 people in Huntersville, NC, who have been diagnosed, many of whom were brought together through a Facebook group.

“I take my hat off to the patients. The investigation really started because the patients and their families pushed for it,” says Orloff.

With the nation’s eyes on them, Orloff and her colleagues set out to make sense of what was happening. “We started our investigation by first reaching out to the state health departments and cancer registries, but we were unable to confirm that these were true ‘cancer clusters’ using the standard epidemiologic approach. It was at this time we realized there was no precedent to an investigation like this and we were going to need to approach this in a novel way,” Orloff notes.

The state cancer registries – normally the best source of information – just don’t capture information needed for an investigation of a rare cancer. For example, both the Alabama and North Carolina state cancer registries do not always capture people who were diagnosed outside of the state even if they lived most of their lives in state. Since a number of the patients were younger females at the time of diagnosis, their state of residency at the time of diagnosis did not always consider years spent away at college or other residential changes.

With support from the town of Huntersville, NC Orloff and her team started to look for any clues that could lead to an explanation for what caused these unique accumulations. Most epidemiological investigations hone in on common exposure to the cause of disease. For example, in mesothelioma experts look for exposure to asbestos. Without knowing the cause of uveal melanoma, they looked for patterns and trends among the patients and included detailed mapping of any air, water, and soil concerns – what they deemed a geospatial analysis –for clues. Despite the exhaustive investigation, the analysis provided little new information beyond what had already been captured by the state. An interactive presentation that describes the team’s work in Huntersville, NC is available here.

“It was a difficult conversation, and even if we never uncovered a smoking gun, we were still learning critical things about this disease,” says Orloff. In addition to gathering information, the team also quickly understood that they needed a better way to document and follow uveal melanoma cases. Hopefully, within the next year, a uveal melanoma registry will launch to better capture cases and gather much needed information to help connect the dots between patients.

Orloff’s investigation helped spark interest at the Alabama Department of Public Health who announced the start of their own investigation on May 5, 2018. With additional resources and attention focused on Auburn, answers may be on the horizon.

In addition to the ongoing investigations in Auburn and Huntersville, researchers are also working to improve the outlook for patients facing metastatic uveal melanoma. Research is focused on identifying and better understanding the genetic and immunologic basis of uveal melanoma and then translating this understanding into better treatments.

For example, about 50% of cutaneous melanoma are BRAF mutant. Researchers have exploited this mutation with a cadre of targeted therapies that interfere with this mutated protein and slow or stop the growth and spread of melanoma. Researchers are optimistic that uveal melanoma specific mutations in BAP1, GNAQ, or GNA11 could provide a similar opportunity for this subtype. In addition there are a number of novel immunologic approaches and combination strategies being studied. Clinical trialsare currently underway investigating these and other approaches.

To Orloff, who wanted to specialize in uveal melanoma to help a patient population with so few options, the progress is exciting. “Progress is really happening and even though uveal melanoma hasn’t yet benefited from the same advances as cutaneous melanoma – it is helping us to better understand what could work,” says Orloff.