What Comes Next? The New Normal After Melanoma 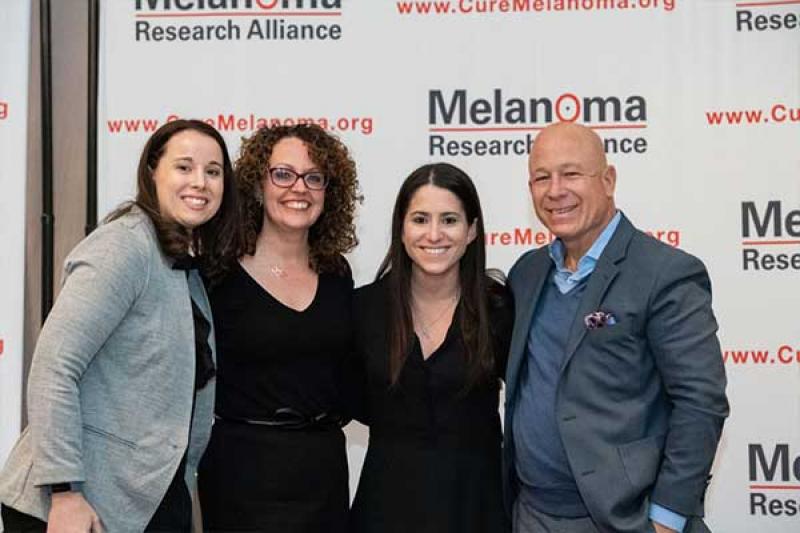 Although many patients and their loved ones would like to put melanoma behind them, it tends to be a lifetime journey, pointed out Dr. Rachel Vogel, of the University of Minnesota, who lost a brother to cancer, and now devotes her research to better understanding the needs of cancer survivors. “A cancer diagnosis is life changing,” she stressed when moderating a panel discussion at the MRA Melanoma > Exchange Patient Forum. The panel brought together Tracy Callahan, a four time early-stage survivor, Dan Engel, a 20-year stage 4 survivor, and Lauren Miller, who’s twin sister died from the cancer in 2014, to discuss the impact of melanoma on patients and their loved ones. From life- long prevention concerns, fear of recurrence, feelings of isolation, and survivor’s guilt – the panel and the audience shared candidly about the ‘new normal’ after melanoma.

“I thought once they cut out my melanoma, I would be done. But I quickly found out it is not one and done,” said Tracy Callahan, who was first diagnosed with early-stage melanoma at the age of 38. Since then, she’s had countless biopsies and has been diagnosed with melanoma an additional three times. “I thought if you cut it out, you could be done, but I have to meet my doctor every three months,” she said.

Vogel stressed that once you have melanoma, the risk for being diagnosed with another melanoma is nine times greater than that for the average person. Melanoma patients have to be vigilant about regular checkups, body scans, and sun safety.

The panel also discussed the anxiety of ‘living scan to scan’ and not knowing what the results would suggest. Callahan mentioned that each and every biopsy plagues her and her children with anxiety. “I’ve found that humor is the best way for me to deal with it. I either laugh about it – or I cry,” says Callahan. She wears superhero underwear for all her doctor visits. “Humor is great medicine,” she said.

Lauren Miller, shared how her sister Tara demanded humor and positivity of everyone. “She was just hilarious on her blog, and made a point of having fun and making the best of it – and that really set the tone for our family as we handled her illness.” For example, “she had a post-brain-surgery party,” she said.

Dan Engel, a long-term melanoma survivor who was first diagnosed with Stage 4 melanoma in 1999, suggested one way to help counter the anxiety of a melanoma diagnosis is to “never let the odds dictate anything. You are the only statistic that matters.” This sentiment is particularly important as more information becomes available online. Statistics don’t lie, but they aren’t always presented in a useful or non-biased way. For all of the ‘miracle stories’ that are told about modern medicine there are still people who aren’t benefiting. On the flip side, sometimes patients respond to something that can’t be fully explained by the data we have available. “Statistics are important, but they shouldn’t dictate you,” says Engel.

Speaking from the audience, Mark Gorman, suggested patients undergoing active treatment make a point of taking the weekends off or giving themselves (and their loved ones) opportunities to take a break from thinking about their cancer to spend it enjoying family and friends. “Whatever you are worrying about Friday afternoon will keep until Monday. If you’re trying to think about what comes next, don’t lose sight that one of the reasons you are being treated is to spend time doing things that don’t have anything to do with cancer,” he stressed.

A cancer diagnosis can be isolating. Even when you are surrounded by loving friends and family – it’s almost impossible for them to fully understand what you are going through, several participants noted. “Those you think will always be there disappear, and sometimes the people you didn’t expect - just ‘get it’ and intuitively know how to help you,” Engel noted.

Callahan agreed that she had incredible friends, but they didn’t fully understand what she was going through, unlike other melanoma patients and their caregivers who she called her “melahomies.” She suggested after a melanoma diagnosis, that

you “find your tribe, your support. It’s amazing how many of us are out there and need to talk about it, and it’s so great when we find each other and can talk openly.” Miller added that she found the melanoma community of patients and family members to be more understanding of what she was going through than her good friends. “They understand that sometimes you just need to have a melt down and accept it,” she said.

“The Melanoma > Exchange online community, hosted by MRA, is a great example of a virtual resource where people affected by melanoma can get support and share experiences,” offered Vogel. “Sometimes, it’s even easier to let your guard down with a screen separating you.”

Engel also stressed the importance of steering clear of people that add stress to your life. “Cancer is the perfect trump card. When someone asks you if you want to come over for dinner, you can say no because you have cancer,” he said. He added, “If there’s any time to be selfish, it’s when you are dealing with cancer because it’s your life that is in danger.” Callahan added that it is important to “be kind to yourself and remember you don’t have to be the strongest person in the room always.” One melanoma patient in the audience noted that insisting cancer patients be positive and strong can place a huge burden of guilt on the patient if he or she doesn’t feel so heroic. “There are a lot of us who don’t feel that way, and it’s not our fault,” he said, to a loud round of applause.

“This is a particularly important in an era where cancer is frequently described using war or battle metaphors,” said Vogel. “Today, despite every research advance or the heroic efforts by patients, doctors, and scientists alike some people still die from melanoma. It’s not because they didn’t try – and that’s important to keep in mind.”

Several participants spoke of the survivors’ guilt they experience, and how they try to alleviate it by giving back to support other patients, advance research, or raise awareness. “Survivors’ guilt is difficult, but being able to give back to the melanoma community helps me overcome those feelings,” said Callahan.

“I’d like to figure out a way that science can learn from me,” Engel said, noting that survivors could contribute their blood and tissue specimens to research aimed at understanding who responds to immune and other innovative treatments and why. Gorman noted that the National Cancer Institute has just started collecting data on long-term survivors of cancer, which is “an opportunity not to be missed,” he said.

Another way to support melanoma research is by participating in or raising awareness about the importance of clinical trials. MRA’s recently launched Fight Back Give Back campaign offers free resources to help patients and their loved ones understand how clinical trials work and the importance they play in patient care and the research process. In addition to accessing experimental treatments, there are also many studies that need healthy volunteers as a control population.

Miller said that every passing birthday she doesn’t share with her sister has been difficult for her, and she has questioned why her sister, with whom she did everything, died from melanoma, while she lives on. Her way of dealing with that guilt is to help her family carry on her sister’s legacy – the Tara Miller Melanoma Foundation – to support and help advance melanoma research. “My sister dreamed of a cure for melanoma that would make sure the next person in her shoes didn’t have to go through what she did,” she said. To date, the foundation has donated more than $2.4 million to support research, including 4 MRA Young Investigators. “Her marching orders were to focus on her foundation and find some silver lining.”