Working to Take the Luck Out of Melanoma 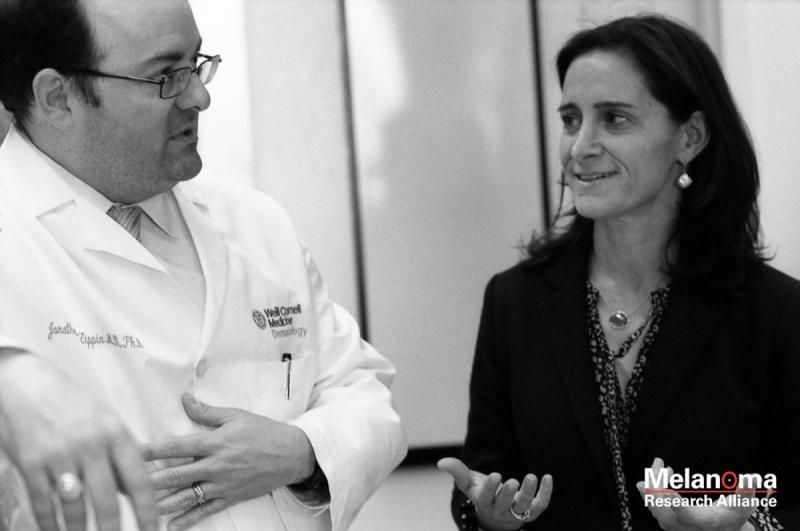 Ellen Davis has a scientific, analytical mind and prides herself on cool, data-driven decision making. Yet, when confronted by a tiny – yet concerning mole on her quad – her first instinct was to ignore it.

Yes, her skin had been checked in the past – well over a decade ago – but given her relatively dark complexion, Ellen did not feel she was at risk for melanoma. Or so she thought.

But, as she sat with her daughter in the dermatology waiting room, a sign asking: “Have you had your skin checked lately” jumped out at her.

The appointment was for her daughter – but she couldn’t shake the waiting room sign and the mole she had recently noticed. The debate raged in her head – should she intrude on her daughter’s appointment and ask about the mole or ignore for now and perhaps come back later?

Thankfully, the poster – or her own intuition – convinced her. She asked the dermatologist if she would have a quick peek. The dermatologist smiled, agreed, and suggested a complete skin exam.

Low and behold – the doctor identified and removed three concerning moles. The small spot on her quad came back as invasive melanoma and the other two spots as severely atypical nevi.

“I was in shock,” remembers Ellen. “I knew nothing about melanoma – about how serious it is – nothing, zippo. I didn’t think it was anything that I ever had to worry about.”

She was referred to Dr. Mary Sue Brady, a surgical oncologist, at Memorial Sloan Kettering Cancer Center. Dr. Brady would need to surgically remove the cancerous tissue and an area of acceptable clear margins extending down to the muscle. She also would perform what is called a Sentinel Lymph Node Biopsy to determine if the melanoma had spread to her nearby lymph nodes. The surgery would take place in just over two weeks, but Ellen couldn’t stop herself from considering worst-case scenarios.

“I knew it was either going to be fine, or it was going to be really bad,” remembers Ellen. “I remember asking Dr. Brady what would happen if it had spread – she just looked at me and said that we weren’t going to have that conversation yet – let’s worry about that if and when.”

Thankfully, after a terrifying wait, the results came back. While Ellen’s melanoma was invasive – and classified as Stage 1b disease - there were no signs that it had progressed to nearby lymph nodes.

While still serious – and requiring close follow up – Ellen would need no additional treatment.

“I felt so lucky. I was in the right place at the right time” says Ellen. “Had it not been for the waiting room sign, I might not have ever had the mole checked. That’s the scary thing about melanoma – catch it early, you win; catch it a little late, you lose. It’s clear that too many people just don’t get how serious melanoma is and who is at risk – and I was one of them.”

After her moment of reckoning, Ellen decided to find ways to take action to raise awareness around prevention and early detection and to get involved with advancing melanoma. Just as she was learning the lay of the land, she received a phone call from Debra Black.

Debra introduced Ellen to the budding organization that she and her husband, Leon, had recently formed. The organization, MRA, had already started to make waves with a mission to cure melanoma through smart investments in research.

“The more I learned, the more I was impressed with MRA,” says Ellen. “My husband, Gary, and I both feel that the MRA’s mission and execution of that mission is near perfect.”

Ellen Davis joined the MRA Board of Directors in 2012, and has dived deep into MRA’s work as Chair of the Board’s Scientific Programming Committee.

She and her husband have also made personal investments in melanoma research by supporting four MRA Young Investigator Awards.

“The opportunity to fund a Young Investigator award is so unique,” says Ellen. “You really get to know the investigator, meet their team, see the science up close and first hand, and to ask questions. You feel like you’re part of something so much bigger – part of the team.”

Ellen recently was able to tour the lab of Dr. Jonathan Zippin, a physician-scientist based at  Weill Cornell Medicine. Zippin, a dermatologist by training, was the Young Investigator – supported by Ellen and her husband, Gary – on a 2014 MRA Team Science Award.

“Dr. Zippin and I looked into a microscope, and he explained how the visual related to our funded research. It was mindboggling,” says Ellen. “It felt like I was on the front lines of discovery – unravelling mysteries in order to save lives. It was both humbling and thrilling to feel I had a small role.”

Ellen believes that research is the best tool we have to “take the luck” out of melanoma. She’s proud to be involved with an organization – and a cause – that is relentlessly moving forward in search of answers, new treatments, and ultimately a cure for melanoma. “I know that given the right support, research will get us there,” she says.