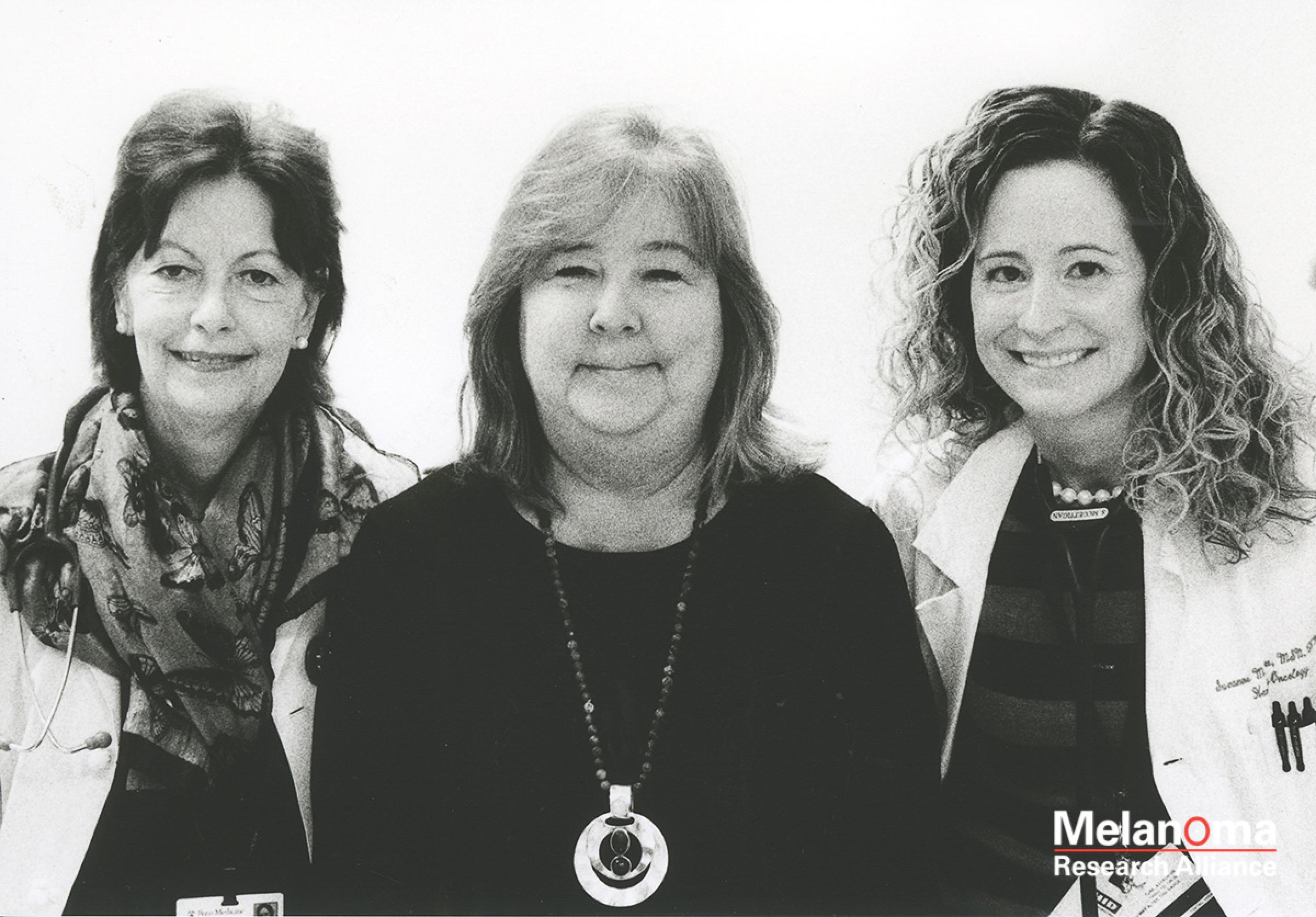 All things considered, things are looking up for Margaret Oplinger. A marble-sized tumor is all that’s left of her Stage 4 melanoma; and her ongoing treatment, every-other week with nivolumab (Opdivo®), will hopefully enable her immune system to attack – and eliminate – this last remnant.

That doesn’t mean it’s been easy, because it hasn’t. Melanoma has been in Margaret’s life for 25 years – and until relatively recently, it was touch and go. Melanoma had invaded her liver and several tumors were visible under her skin. She’s also experienced some severe side effects – or what researchers and clinicians call immune-related adverse events. Managing these reactions is doable – but not always pleasant. High-dose steroids have become a lifeline.

“All I can say is thank God that this didn’t happen a few years ago before these treatments weren’t even available,” says Margaret. “Immunotherapy – all road bumps included – is saving my life.”

A quarter century ago, a ‘funny flat, purple spot’ just showed up on the back of her arm. Her family doctor biopsied it and it was removed – via wide-local excision – at a nearby hospital.

“It felt like it was coming out of left field,” remembers Margaret. “I have no family history and while I didn’t wear a lot of sunscreen growing up – I also didn’t really get burned.”

While traumatic, the long-term benefit of this experience was that it put Margaret on notice; while lucky this time, she needed to keep her eyes on the lookout for any future sign of melanoma’s return.

Her luck continued for almost 20 years, but one day six years ago, her mother noticed something on the back of her leg.

“I ran into the bedroom to look in the mirror – and was honestly very angry that I hadn’t noticed it sooner,” says Margaret. “But there it was – a flat, black spot right above my knee.”

Her dermatologist confirmed it was melanoma, but still relatively early. Mohs surgery would be used to safely remove it while sparing as much healthy tissue as possible.

In Mohs surgery, melanoma is excised – or removed – one tiny layer at a time in doctor’s office and is generally performed under local anesthesia. After each layer is removed, it is then carefully examined under a microscope. This is repeated – one layer at a time – until melanoma cells are no longer found.

Margaret continued to be all clear until August, 2018 when melanoma came back with a vengeance.

At first, she wasn’t sure what she was dealing with. A golf-ball sized lesion suddenly appeared on her right inner thigh. At first, she thought little of it – however, it progressively looked worse and then started to become painful.

Her primary care physician started to do testing to determine what they were dealing with. X-rays revealed nothing and before further tests could be conducted, the lesion became painful. Her doctor suggested she go to the ER for rapid testing.

Bloodwork still didn’t show anything, but doctors in the Emergency Department suggested she see an oncologist. Dr. Michael Costello immediately sent her for a biopsy.

By this time the golf ball sized lesion was joined by two additional lumps under her skin – each about 4 inches long. The biopsy results quickly came back. It was melanoma, and it had metastasized.

“I was so scared,” says Margaret.

Dr. Costello referred Margaret to his boss, Dr. Lynn Schuchter – Division Chief of Hematology Oncology and the Director of the Tara Miller Melanoma Center at the University of Pennsylvania.

“Dr. Costello didn’t just refer us – he texted her,” says Margaret. “He really made sure that we got to see her as quickly as possible. We really appreciated that.”

After her first meeting with Dr. Schuchter, she had another scan. This one revealed a spot on her liver; making her melanoma now Stage 4.

Soon after receiving her first infusions of the combination, the side effects started. After her third treatment, the side effects became severe. She developed colitis – and started to take steroids and Remicade to ease her symptoms.

“I essentially had diarrhea for three months, and eventually ended up in the hospital with adrenal failure,” says Margaret.

Fortunately, the steroids started to do their job – and Dr. Schuchter reduced the dose of nivolumab infused at a time – so instead of 480 mg every four weeks, Margaret gets 240 mg every other.

When Margaret was diagnosed with Stage 4 melanoma, one of the things she feared missing the most was seeing her daughter get married. It was a destination wedding – so making sure that she was ready and able to travel was really important. After making this known to her care team, they worked together to make it happen.

“I’m just so grateful,” says Margaret. “Dr. Schuchter has never been anything but kind and caring. She knew how important being there was to me – and we found a way to make it happen.”

Despite melanoma – and the side effects of her medication – Margaret has never stopped living and enjoying her life. Most weekends, Margaret can be found enjoying her new vacation home that she and her husband just finished as she was getting diagnosed. She hosted holiday meals for friends and family, rode her bike, and enjoyed time with her husband.

“All things considered, it’s been a remarkable year,” says Margaret.

And throughout this year of ups and downs, her husband Todd and her sister-in-law Sharon Killheffer have consistently been at her side. “I just don’t know what I’d do without the support of my family,” says Margaret. “My husband has really helped me stay positive and my sister-in-law was there for every test, treatment, and doctor’s appointment for months to support both me and my husband.”

Today, all that’s left of Margaret’s melanoma is a ‘small marble’ and she’s crossing her fingers that too is gone by the time she gets her next scans. She has faith in Dr. Schuchter – and the research that has allowed her to come so far.

“There is just so much hope today. I’m so grateful for Dr Schuchter! I don’t know where I would be without her and her team,” says Margaret. “Thank god this didn’t happen a few years ago when we had so many fewer treatment options. It isn’t easy – but this is doing its job. I have faith,” says Margaret.