For Kimberly, Clinical Trials Were a Leap of Faith 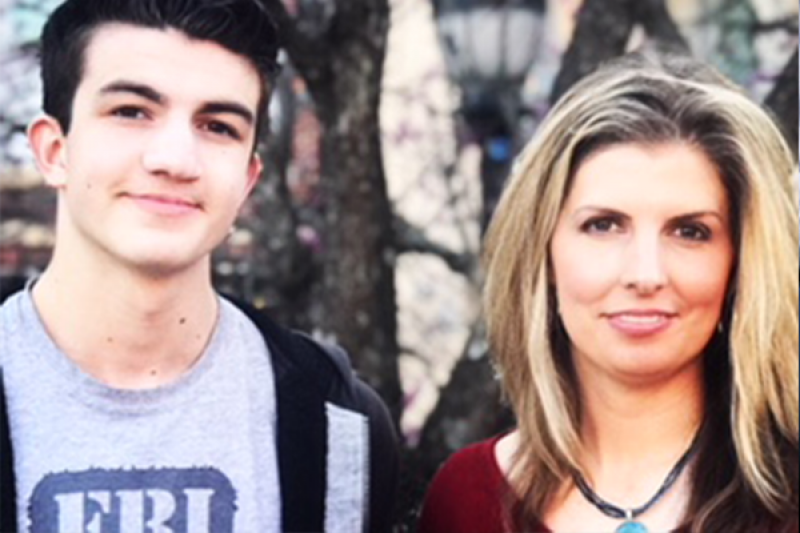 “My son got his driver’s license this week. He’s on day three of freedom,” Kimberly Albertson says with a laugh. “Most parents would be terrified but I cherish these things.”

It’s been a long journey for Kimberly and her son Samuel to get to this place.

Kimberly was just 19-years-old when she noticed the black “freckle” on her foot. But it wasn’t until she was 22-years-old and pregnant with Samuel that the “freckle” became a cause for concern.

Their journey began when the “freckle” on Kimberly’s foot changed shape over the course of her pregnancy and she had it and two sentinel nodes surgically removed. Meanwhile, at just 8-days-old, Samuel would have the first of 10 eventual surgeries to help correct his cleft lip and cleft palate. During Samuel’s first few years, both he and Kimberly underwent numerous surgeries and doctors’ visits.

By the time Samuel was just 2-years-old, Kimberly’s physician, Dr. Joe Stephenson of the Cancer Centers of the Carolinas, recommended she receive high-dose interferon. “That’s when I really grasped that this is melanoma. This is cancer,” Kimberly says. The treatment left Kimberly tired but she didn’t want to miss a moment in her young son’s life. She organized her treatment and sleep around Samuel’s schedule.

Following nearly a year of interferon treatment, Kimberly went in for her PET scan. The scan lit up like a Christmas tree and Kimberly was informed that her melanoma had spread to her lymph nodes. She had 11 lymph nodes surgically removed. That was when the discussion of clinical trials began.

Kimberly saw Dr. Geoffrey R. Weiss, former Chief of the Division of Hematology-Oncology/former Medical Director at the University of Virginia (UVA) Cancer Center where she participated in a clinical trial. As part of the trial, Kimberly received an experimental vaccine and the chemotherapy Cytoxan, with the aim that together they would boost the immune response against the melanoma cells and, ultimately, kill the tumors. Every two weeks for almost a year, Kimberly drove from her home in South Carolina to Virginia to participate in the study.

At the conclusion of the study, they noticed a “hot spot.” Kimberly received another PET scan. This one was even more dire and required surgical removal of 33 lymph nodes from her leg and pelvic area—one-third of which were found to be cancerous. Following this surgery, Kimberly would need to wear compression clothing.

A year later, the cancer had spread to one of her lungs, was still in her pelvis, and a lesion was found in her liver.

Dr. Stephenson then referred her to an ipilimumab (Yervoy) clinical trial. Ipilimumab attempts to stimulate the body’s immune system to fight remaining cancer cells. The therapy is now FDA approved for patients with advanced stages of melanoma and in the adjuvant setting. For Kimberly, however, the therapy resulted in pituitary gland swelling and after her first induction her doctors decided she should stop.

“At this point I felt like I was a sitting duck, just waiting for the cancer to get me,” confides Kimberly. “But in all of this, I found comfort through prayer.”

Another of  Kimberly’s doctors, Dr. Wen-Jen Hwu thought she might respond well to an experimental BRAF study. At the time it was a very rare form of treatment. It was so rare, in fact, that even Kimberly’s primary oncologist was apprehensive about her starting it.

And just when Kimberly finally decided to say yes to the study, she was informed that the last spot had been taken. There was, however, a similar study taking place in Nashville, Tennessee. There was one spot left in the trial. A patient was on the fence whether to join and Kimberly was told to hang tight. What followed were two of the longest weeks of Kimberly’s life.

Then she got the call. “You’re in,” she was told. Even still, Kimberly was particularly nervous about this trial. “Even up until the moment my mother arrived to take me the airport, I was looking for a sign,” Kimberly admits. “My husband had brought home a devotional and I opened it up to the reading for the day. It was incredibly timely but my heart was still unsettled.”

But then it happened—Kimberly saw a sign. When she flipped over the devotional, there on the back, as clear as day, read the words: “Get ready. Pack your bags. Go to a city that knows a thing or two about music. Nashville, TN.” And so Kimberly did.

Her leap of faith paid off. After undergoing her initial round of treatment in a clinical trial led by Dr. Jeffrey Infante, Kimberly had her first-ever clean PET scan!

Leaving the hospital that day, Kimberly saw the image of the building that was imprinted on the back of the devotional. She had just enough time to go in and visit before her flight home. Much like her journey to Nashville, Kimberly paused at the doorway but then pushed open the doors and walked through.

There on the other side was Betty—the editor of the devotional series.

After some chatting, Betty shared that she had a miscarriage in her youth and that Kimberly was the very same age that her daughter would have been. Betty offered Kimberly a place to stay when she came back for future treatments. “I wouldn’t normally accept an offer to stay at a stranger’s house but it was like God working through them, providing me with what I needed,” explains Kimberly. Betty would go on to offer not only a room but also drive Kimberly to every one of her future medical appointments. And thus began the start of a lifelong friendship.

“I had previously been told that I had six months promised to me and at best a year,” recalls Kimberly. “Even with my current medication, I’m told it’s only supposed to work for eight months. I’ve been on it for eight years and am cancer-free and counting,” says Kimberly. “Truly, I wouldn’t be here today if it weren’t for clinical trials. And while I give credit to the doctors, Jesus Christ—ultimately—is my healer.”