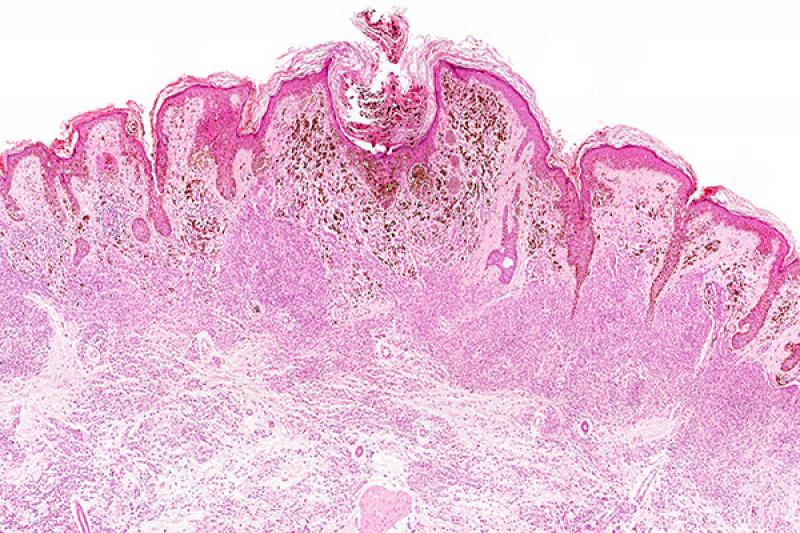 Tremendous progress has been made in understanding the basic biology needed to trigger melanoma and fuel its growth and progression. These findings have led to the targeted therapies we have today for melanoma patients that target the proteins BRAF and MEK (with BRAF mutations are seen in about half of cutaneous melanomas). But because not everyone responds to these treatments and those that do tend to relapse, researchers continue to probe deeper, finding new molecular culprits that could lead to novel and more effective melanoma treatment strategies.

How Melanocytes Turn Into Melanomas: 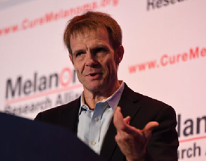 Lorenz Studer of Memorial Sloan Kettering Cancer Center has been investigating the process by which melanocytes, a type of cell that resides in the skin, turn into melanomas using both human stem cells and zebrafish models of melanoma. Studer has identified parallels between how stem cells differentiate — or transform — into melanocytes and how melanocytes can morph into melanomas. His studies reveal that similar genetic programs operate in both of these cellular processes and identified a particular protein that leads to changes in melanocyte metabolism, growth, and movement that enables the transformation of these cells into a melanoma. Melanoma patients whose primary tumors express high amounts of this protein have worse outcomes. Although more validation studies are still needed, these studies point to a novel drug target that may prevent tumor formation. Studer suggested that other factors similar to the one he uncovered could play key roles in enabling melanoma to persist. “This is just the beginning as there could also be other similar factors needed for tumor maintenance that could be targeted by treatment,” Studer stressed.

Research conducted by Elaine Fuchs at the Rockefeller University is also focused on how melanomas initiate. In particular, she is studying the melanocyte stem cells — these are cells of the skin that perpetually self-renew, creating cells that eventually mature into melanocytes — the cell type that gives rise to melanomas. Fuchs thinks studying these stem cells may be important because her studies on squamous cell carcinoma — another type of skin cancer — have revealed that the stem cells of the skin that give rise to those tumors are often treatment resistant and contribute to relapse and metastasis. Tumors are often surrounded by blood vessels and attract immune cells. Fuchs’ studies show that these inputs can cause the tumor’s stem cells to be active and invasive. “We think that the tumor stem cells also enter these blood vessels and cause metastasis,” Fuchs offered. Fuchs’ early studies suggest something similar may be happening with melanoma. She continues to explore this with the hopes of developing compounds that can block the signals that activate the stem cells, thereby preventing metastatic spread, disease relapse, or recurrence.

The Role of RNA in Melanoma Formation:

Other researchers are exploring sections of the genetic RNA machinery in our cells and how they might contribute to melanoma. RNA is best known for being the intermediary between the DNA that makes up our genes and the proteins that these genes give rise to. But there is a lot of RNA in cells that does not participate in this process, and for a longtime, scientists thought it was unimportant for cellular functions — so much so that it was often referred to as “junk” RNA. But now it appears that these “junk,” or more accurately ‘noncoding,’ regions of RNA are rife with specific variations that appear to govern the initiation, growth, and even the spread of tumors, including melanomas. “I hope I can convince you that these noncoding regions are not garbage,” stressed Eleonora Leucci of the KU Leuven during her presentation.

She found a noncoding RNA molecule abbreviated SAMMSON that is expressed by most melanomas, but not normal melanocytes, and that promotes melanoma growth and survival. When Leucci blocked SAMMSON in melanoma cells, most died, including both BRAF mutant and non-BRAF mutant cells, suggesting SAMMSON may represent a broad drug target for melanoma. Reducing SAMMSON expression increased the effectiveness of BRAF/MEK inhibitors in melanoma mouse models, and even worked to slow the growth of tumor cells resistant to BRAF/MEK inhibition. These findings suggest that a compound that targets SAMMSON could be effective in melanoma patients in combination with BRAF-targeted treatment, and because SAMMSON is not found in normal cells, this compound may cause few serious side effects. “This would be beautiful,” Leucci said, but added that unfortunately, there are no agents targeting SAMMSON that are approved yet in the clinic.

Interestingly, SAMMSON acts on some of the same cellular signaling pathways that a specific class of FDA- approved compounds do, leading Leucci to suspect they might also be effective in killing melanoma cells. Testing this in mice by combining the compounds with BRAF/ MEK inhibition, as well as with immunotherapy, suggests this may be a promising therapeutic strategy; however, more follow-up studies are needed before testing this in patients. 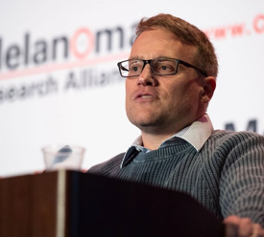 Florian Karreth of the Moffitt Cancer Center also focuses his research on the noncoding regions of RNA, in this case on regions that are thought to indirectly fine-tune protein production and play a role in melanoma growth and progression. He found one short stretch of RNA, called miR-29, that when inactivated enhanced production of melanoma tumors in mice. Further analysis revealed that loss of miR-29 promotes melanoma because it leads to increases in the production of protein MAFG, which is normally shut off by miR-29. “Melanoma cells are addicted to miR-29 inactivation and overproduction of MAFG,” Karreth said. He also found three genes that affect the activity of miR-29 and other short noncoding regions of RNA. When these genes were overactive, they promoted melanoma metastasis in mice. “Understanding the mechanisms of non-coding RNAs has the potential to uncover novel targets for therapy,” Karreth stressed.

All this basic research on what causes melanoma to start, and then eventually progress, has the potential to lead to more effective melanoma treatments, but translating these findings into something usable in the clinic can take many years, noted Rizwan Haq of the Dana-Farber Cancer Institute. At the Patient and Advocate Forum, he pointed out the lack of new melanoma treatments in what some call a drought period between 1975 to 2010, prior to the explosion of new treatments in the decade following. He stressed that “If we look at the pre-clinical lab work that directly led to the development of these therapies approved since 2010, it was [conducted] during this so-called drought. Research is the engine we need to support in order to drive the next generation of innovation and treatment.