Bronze Bodies and Black Lungs: Five Ways the Tanning and Tobacco Industries Use the Same Playbook 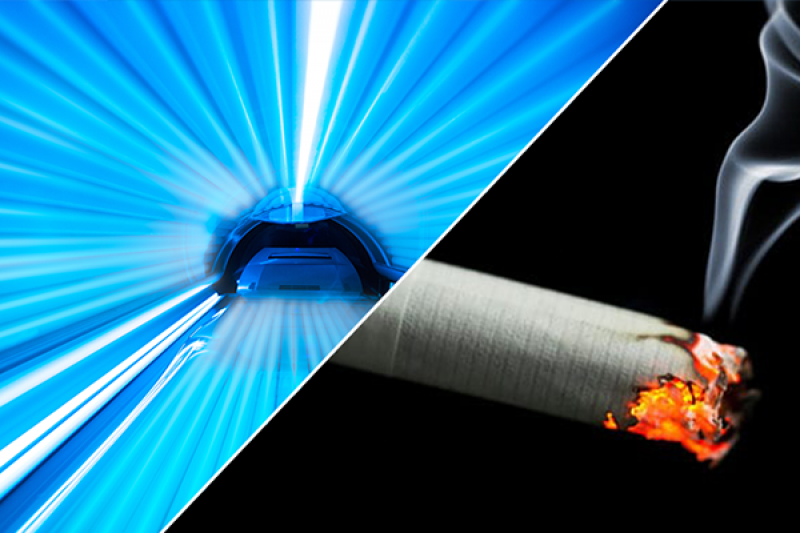 As indoor tanners pull their booth covers across their bodies, they are increasing their risk of developing melanoma by as much as 75%. “Use a tanning bed once, and all bets are off,” says Dr. Alan Blum.

Though rates of indoor tanning are declining, 35% of Americans and 59% of college students have reported using a tanning bed in their lifetime. Overall, tanning is believed to be the cause of 400,000 of the 4 million cases each year in the United States of all types of skin cancer, according to the American Academy of Dermatology (AAD).

Dr. Alan Blum, Director of The University of Alabama Center for the Study of Tobacco and Society, has chronicled the influence of the tobacco industry on the US population for over 30 years, and has fought against its grip on society. Now, Blum hopes to wage a similar war on the tanning industry to prevent mass death and suffering due to melanoma with his Tanning Bedlam Collection.

Blum is a natural ally to our nation’s skin cancer prevention efforts. According to Blum, both the tobacco and tanning industries exploit people in similar ways, by targeting youth, downplaying their own corporate responsibility, infiltrating pop-culture, and indeed, by becoming prolific icons.

Five Ways the Tobacco and Indoor Tanning Industries Are Alike

Both Industries Put Profit Ahead of People

Let’s start with the basics: tanning salons and cigarette manufacturers are big businesses motivated by making money. This means that hooking young people on their product is critical for their survival.  “Health is such an abstract thing, we don’t realize it until we lose it,” says Blum. “These industries know this, and exploit it.”

Without a doubt tobacco and tanning beds cause cancer. In fact, both have been designated as Group 1 Carcinogens by the International Agency for Research on Cancer (IARC). Other Group 1 carcinogens include formaldehyde, arsenic, and asbestos.

Both Industries ‘Hide Behind the Label’

Once tanning bed and tobacco manufacturers lure you in, they put the onus of health on YOU. They side-step blame by slapping obscure warning labels on their products, and then confidently announce that “Users make their own decisions, they’ve seen the warning labels, there’s nothing we can do,” says Blum. Meanwhile, the warning about cancer on the front of the cigarette pack or on the backside of a tanning bed has done little to discourage cigarette consumption or the use of tanning beds.

FACT: For most of the 20th century, ultra violet radiation-emitting “sun lamps” by General Electric and other manufacturers were advertised in medical journals as a way to get healthy doses of vitamin D during winter months. The first full-body immersion tanning beds were manufactured in 1978. In 2014, the Food and Drug Administration ordered tanning salons to include warning labels on their products. In spite of these warnings, which were meant to discourage minors from tanning, nearly a third of users of tanning beds reported tanning before turning 18, according to the AAD.

Both Industries ‘Blame the Victim’

No one deserves cancer, yet “People who get lung cancer get less sympathy than other patients because they are blamed for having smoked,” says Blum. Cancer-shaming is a way to deflect all responsibility for misleading health claims and to place the onus of health on the patient, as cigarette manufacturers do.

FACT: As if cancer wasn’t enough to cope with, melanoma and lung cancer patients may also need to combat depression as a result of being stigmatized. Defining an individual by their disease—be it cancer, mental illness, or obesity—is dehumanizing, reductive, and divisive.

A little poison is still poison, but both industries perpetuate the myth of safety in moderation.

In 1954, tobacco manufactures broadly introduced the paradoxical concept of “the safe cigarette.” In reality, the filters found in about 98% of cigarettes today don’t filter anything. They are fraudulent. “The filter actually makes cigarette smoking more dangerous because people have to suck harder, and thus they get exposed to far more poison gases like carbon monoxide, cyanide, and formaldehyde gases at far greater velocity,” says Blum. There is no safe cigarette.

Just as there is no safe cigarette, when it comes to indoor tanning, there is no safe tan. Indoor tanning is as dangerous (if not more dangerous) than outdoor tanning because tanning beds emit up to 12 times more UVA radiation than the sun. Furthermore, base tans—a contrived means of building up a tolerance to intense tanning sessions by gradually exposing one’s skin to UV rays—are evidence of already damaged skin cells.

Both industries perpetuate ‘moderation myths’ to encourage complacency among users, explains Blum. The decision to light up or lie down becomes easier to rationalize when terms like “safer smoking” or “safe tanning” are used in justification. There is no safe exposure; tanning beds and smoking both cause cancer and risk is compounded with each subsequent use.

According to Blum, battling the tanning industry is just as important in the fight against melanoma as the fight against the tobacco industry is to smoking. The ultimate goal is to provide the public with expansive health education, revealing how industry profiteering from tanning and smoking translate to real cost by consumers, costs that include deaths, disease, and high medical costs these products can cause,” says Blum.  “We must show each industry’s modus operandi, which is to hook young people to their product.”