Dr. James Allison on the Path to More Effective Immunotherapies 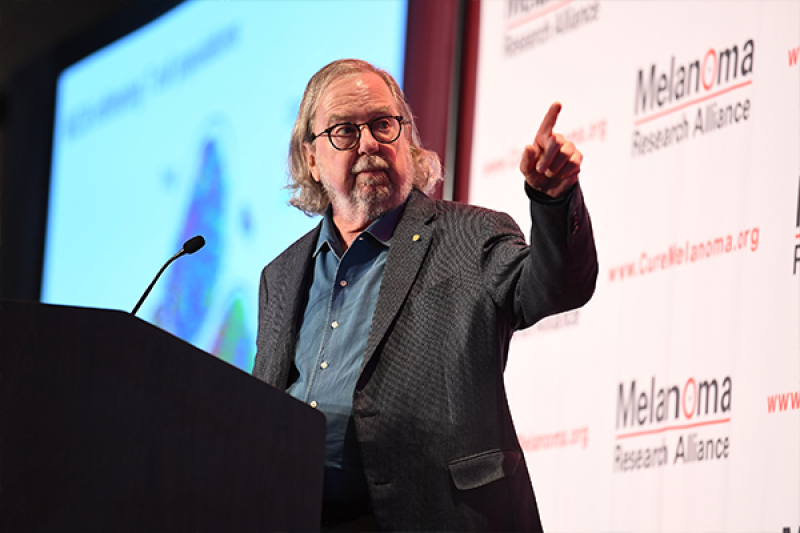 When MRA co-founder and Board Chair Debra Black introduced James Allison of the University of Texas MD Anderson Cancer Center at MRA’s 2020 Scientific Retreat, she described him as the man “who changed the way cancer patients are treated forever.” This fitting introduction is due to Allison’s pioneering work to mainstream the use of checkpoint immunotherapy as a tool in the arsenal against cancer; joining the likes of chemotherapy, radiation, and surgery. Dr. Allison and Tasuku Honjo were jointly awarded the 2018 Nobel Prize in recognition of their groundbreaking work on CTLA-4 and PD-1 checkpoint immunotherapies, respectively. These treatments release the brakes on T cells’ response to tumors and have proven effective in treating, if not curing, millions of patients with advanced cancers.

“There’s been a paradigm shift,” said Allison’s collaborator and wife Padmanee Sharma, also of MD Anderson. “It opened up a whole new field. Back in the 1990s, everyone laughed when we said we wanted to do cancer immunotherapy and only a handful of people attended sessions devoted to that at cancer research meetings. But then the field exploded with checkpoint immunotherapy.”

From Dark Horse to Game-Changer

Decades before Allison began collaborating with Sharma, he had been conducting basic research on how the immune system works, with a major focus on T cells. Then in the mid-1990’s, he was shocked when he went to check on mice given antibodies that blocked a recently discovered immune-suppressing protein called CTLA-4 found on the surface of T cells. The antibody had cured the mice of their cancers. “I was expecting anti-CTLA-4 to slow tumors a little bit, but the tumors completely melted,” said Allison in an interview with the Journal of Clinical Investigation.

Inspired by those findings, and his brother who had been recently diagnosed with advanced prostate cancer, Allison doggedly pursued collaborators to develop his antibody into a drug that eventually would be called ipilimumab (Yervoy). But most major drug companies he approached were skeptical due to the poor track record of experimental cancer treatments that relied on the immune system to kill tumors. Despite seeing promising results in the lab, almost none of these treatments ended up working in patients, and of those that did, only a tiny fraction of patients benefited.

But ipilimumab proved to be a game-changer. Clinical tests of the drug showed it provided long-term complete remissions, which some call cures, in about one out of five patients with advanced melanoma. These were unprecedented findings — particularly because these responses were seen in patients with advanced disease — nearly all of whom would have failed to respond to treatments available to treat them at that time. Ipilimumab was approved in 2011 for advanced melanoma, followed shortly afterwards by drugs targeting another immune checkpoint called PD-1, discovered by Honjo. Checkpoint inhibitors have since been shown effective in treating many different types of cancers, including lung, kidney, colorectal, and bladder cancer.

But that is just the beginning of the story on checkpoint immunotherapies, Allison and Sharma stressed. They and many other investigators continue to search for more immune checkpoints that can be blocked, and thousands of clinical trials of various combinations of new and already approved immunotherapies are underway.

“I never dreamed my research would take the direction it has,” Allison said in an MD Anderson Cancer Center press release. “It’s a great emotional privilege to meet cancer patients who’ve been successfully treated with immune checkpoint blockade. They are living proof of the power of following our urge to learn and to understand how things work.” But Allison also stressed, “We need these drugs to work for more people. Our clinical success has outrun our scientific knowledge of how these drugs work and how they might best be combined with other therapies to improve treatment and reduce unwanted side effects. We need more basic research to do that.”

At the 2020 MRA Scientific Retreat, Allison reported on the abundant basic research findings on checkpoint blockers he and his colleagues have garnered recently. These reveal major differences in how anti-CTLA-4 and anti-PD-1 drugs affect an immune response to tumors, and why combining both types of drugs is especially effective. Allison found that blocking CTLA-4 affects the early stages of T cell activation and causes a wide range of new anti-tumor immuneT cells to proliferate and become active. Blocking CTLA-4 also boosts production of the immune-stimulating protein, interferon-gamma. In contrast, blocking PD-1 acts on a different subset of T cells that do not produce interferon, and doesn’t create new subsets of T cells. In addition, although anti-PD1 treatment expands these mature anti-tumor T cells, it also expands the number of so-called ‘exhausted’ T cells that cannot kill tumor cells. But when the two treatments are combined in laboratory studies, there is no expansion of exhausted T cells, and instead the combination activates a wider range of tumor- killing T cells subtypes and boosts interferon production. Understanding how each drug affects the immune system may allow for the design of improved versions of CTLA-4 and PD-1 antibodies, or new immunotherapy drugs altogether.

“We need to improve survival by doing combination therapy,” Allison stressed. He noted that in addition to combining anti-CTLA-4 treatments with anti-PD1 treatments, agents targeting other aspects of the immune response could also enhance current cancer immunotherapies. He and Sharma found a striking increase in T cells expressing the immunostimulatory protein ICOS in the tumors and blood of patients responding well to ipilimumab. Higher levels of ICOS were linked to greater survival among melanoma patients, and when a vaccine targeting ICOS was given to mice with melanoma, along with anti-CTLA4 treatment, it increased the effectiveness of CTLA-4 blockade. “There are many other immune checkpoints besides CTLA-4 that contribute to immune resistance pathways and we need to understand where and when they play key roles,” Sharma said.

Fortunately, many investigators in addition to Sharma and Allison are devoted to uncovering this information in their labs, now that such basic immunology researchhas proven its worth in leading to effective treatments for advanced cancers. “Improving survival withimmunotherapies can be done,” Allison said. “And understanding the molecular mechanisms gives us a handle on how to do it.”<