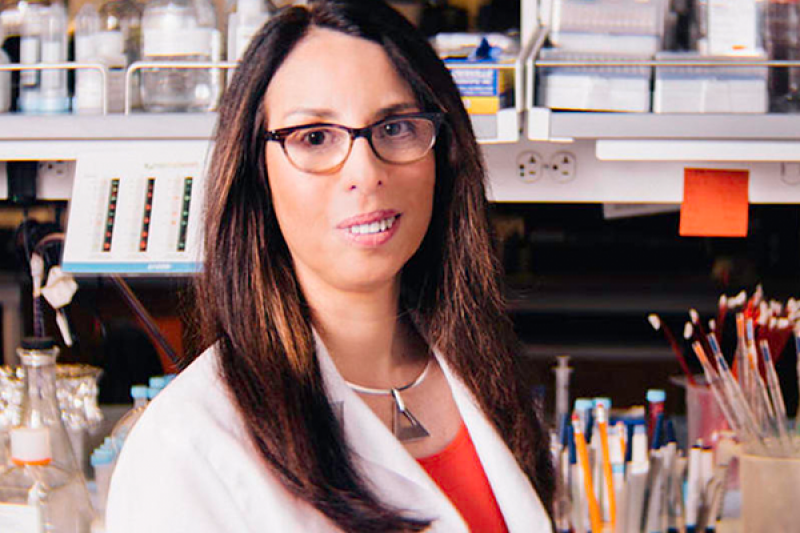 Dr. Jessie Villanueva, an Associate Professor at the Wistar Institute Cancer Center, focuses her work on understanding the molecular pathways that are disrupted by melanoma to uncover future targets for therapy, particularly for patients who have NRAS (pronounced en-ras) mutant melanoma.

When Dr. Villanueva began her work in melanoma, some 15 years ago, it was the perfect scientific challenge. How could a disease be so aggressive – and still be such a mystery? Since then, we’ve made significant progress in understanding the fundamental biology of melanoma and have advanced 12 new treatment approaches. But it was the sheer number of unanswered questions that initially drew her to the field.

Then things got personal.

First, a childhood friend, who she had known since they were both three-years old, was diagnosed with Stage 3 melanoma. Then, later, her uncle passed away due to Stage 4 melanoma, despite the availability of ipilimumab. “I do this work because it’s personal to me,” says Dr. Villanueva. “It evolved from a scientific challenge to a personal passion that keeps me motivated in my work.”

As a translational researcher, Dr. Villanueva’s work bridges discoveries in melanoma biology – and the role of NRAS specifically – to the identification and characterization of novel drug targets and therapeutic strategies.

This research is important because currently patients with NRAS mutations, found in about 20-30% of cutaneous melanomas,have fewer treatment options and generally have a worse prognosis compared to patients with BRAF mutant melanoma.1

One reason for this discrepancy is that patients with BRAF mutant melanoma are eligible for additional treatment options called targeted therapy, a class of medications that don’t (yet) benefit melanoma patients with other mutations. Learn more about mutations and melanoma here.

While NRAS itself has been described as ‘undruggable,’ Dr. Villanueva is focusing her work on other proteins that NRAS co-opts into helping keep tumor cells alive. If she can ‘switch off’ these other supportive proteins, she hopes it will help deactivate NRAS too.

In addition to focusing on these supportive proteins with links to NRAS, Dr. Villanueva’s team has identified several candidates that may play a role in NRAS mutant melanoma. “We’ve found that there are several proteins that are absolutely critical to the tumor’s survival,” says Dr. Villanueva.  Her lab is especially excited about three areas of exploration: TERT, BET proteins, and S6K.

Dr. Villanueva’s work is done using a variety of melanoma models, including patient-derived cell lines, 3D organotypic models, and mouse models. Models are important because they allow scientists to advance their understanding of specific biological systems without subjecting patients to undo risks. Discoveries made using a variety of models may then be moved into human clinical trials.

“I’m very optimistic about our approach and hope that we’ll continue making progress,” says Dr. Villanueva. “This is a big challenge that significantly impacts the lives of many patients and their families, a challenge we are tirelessly working to surmount”.