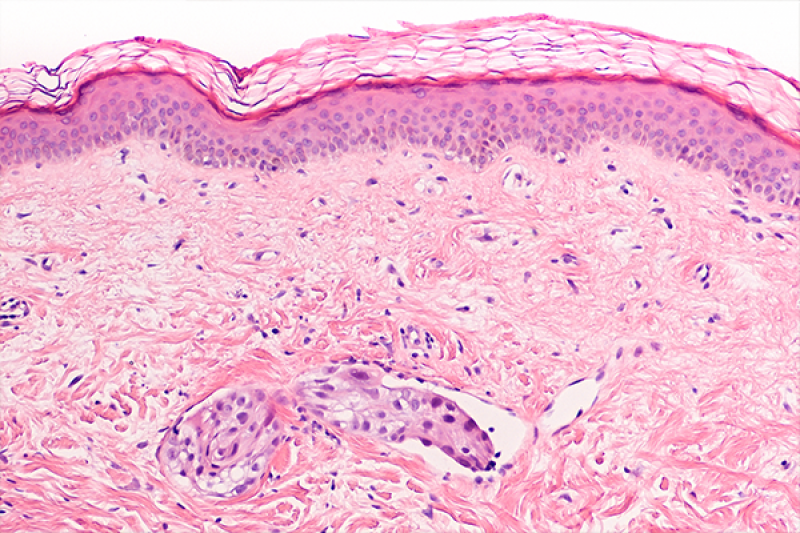 We’ve known for decades that most melanomas – formed from the color-producing cells in our skin called melanocytes – are predominantly caused by UV-radiation-induced damage from the sun or indoor tanning devices. This damage is cumulative but is often invisible. So, while about 30% of melanomas arise from existing moles, most form without any precursor lesion.1Understanding this transformation from normal skin to melanoma –  what researchers call melanomagenesis – is an important area of research that may shed light on strategies to better predict, diagnose, and even treat melanoma.

Dr. A. Hunter Shain, recipient of the Tara Miller Melanoma Foundation-MRA Young Investigator Award in 2018, has discovered a novel way to measure DNA damage in skin at a cellular level. This research may also open the door to estimating future risk of developing melanoma – allowing clinicians to better tailor prevention and screening programs for those most at risk.

“I’m fascinated by genetics, and melanoma is a challenging cancer to understand at a genetic level,” says Dr. Shain. “The reason being is that melanoma has one of the highest mutation burdens of any cancer type. Generally speaking, cancer has 5-10 oncogenic (cancer-causing) mutations. The average melanoma has over 100,000 mutations – how do you figure out the 5 – 10 that are actually driving it?”

from a ‘soup’ of various skin cells. While this approach does allow the study of mutations in melanoma, it cannot reveal mutations in individual melanocytes from normal skin due to the relative scarcity of melanocytes compared to others types of cells in the skin. In the second approach, researchers identify, extract, and then multiply individual cells in the lab – akin to using a photocopier on a stack of important documents. However, just like using a photocopier, this process is imperfect. Small errors are introduced, and then multiplied with each and every copy. This dramatically reduces the usefulness of this approach for the type of exacting analysis Dr. Shain sought to perform.

To overcome these obstacles, Dr. Shain improved upon these amplification technologies, allowing him and his collaborators to analyze the mutations in individual melanocytes from 19 skin biopsies of six people. The individuals who donated tissue included two people with a history of melanoma and four cadavers with no history of skin cancer. All donors were of European ancestry and had light skin and ranged in age from 63 – 85 years old.

First, Dr. Shain and his team created cultures of individual cells from the donor skin samples. Then, in the lab they extracted, amplified, and sequenced the DNA and RNA from each cell. To ensure that no other types of cells – such as keratinocytes or fibroblasts – were included in the analysis, the team carefully reviewed the RNA sequencing data for each and every cell. Then, they cross-validated each cell’s DNA and RNA sequencing data to eliminate any ‘artefacts’ introduced through the amplification process. After this exhaustive process, 133 cells passed all quality control metrics and were included in the subsequent analyses.

“As you can imagine, this is quite the undertaking,” says Dr. Shain. Each sample took five or six months to get to the fully finished genotype. It’s a laborious and technologically challenging process with many potential points for errors. It took time to refine every single step along the way to make it possible.”

Dr. Shain and his team determined that the mutational burden varied greatly (from .82 to over 32 mutations per megabase (the human genome contains over 3,000 megabases)) from cell to cell – even among cells taken from the same donor.

As you would expect, melanocytes taken from sites typically shielded from the sun – such as those generally covered by clothes – had fewer mutations. However, the team also found that melanocytes from the back and limbs – which are only intermittently exposed to the sun – had more mutations than those on the face. This finding is consistent with other studies which found melanomas are more common on intermittently exposed skin than other types of skin cancer.2

“This is a hotly debated topic, but if you compare the anatomic distribution of melanoma to other forms of skin cancer, such as basal cell carcinoma or squamous cell carcinoma, you see some stark differences with melanomas occurring comparatively less often around the head and neck areas,” says Dr. Shain. “I believe that humans may have evolved mechanisms to make it harder to procure melanoma on areas of our body that are always exposed to the sun such as the face. More research is needed to determine this definitively.”

Shockingly, the mutational burden of the melanoma was comparable to that of the surrounding tissue. If found true using a larger data set – this would mean that melanocyte mutational burden could be used to help predict an individual’s overall risk of developing melanoma in the future.

In the future, we may be able to estimate an individual’s risk of developing melanoma using Dr. Shain’s technique. This would enable a new paradigm of personalized medicine allowing clinicians to better tailor melanoma prevention messaging and dermatological care.

“This approach gives you a direct measure of how much damage your skin has and could help you and your doctor determine how often you should be screened for skin cancer or if lifestyle changes are needed,” says Dr. Shain. “This has the potential to cut through the noise to give people actionable insight about skin, sun protection habits, and their health.