From Anger to Hope – One Uveal Melanoma Patient’s Journey 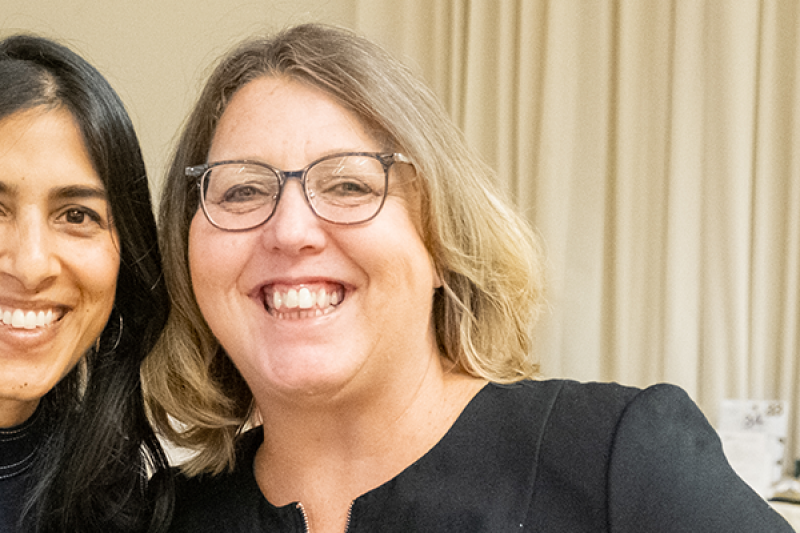 “I went to Lenscrafters, had an eye exam with dilation, and my doctor just nonchalantly blurted out ‘you have ocular melanoma and need to see a retina specialist,’” remembers Melody. “I was then given my prescription, told to choose my new frames, and was sent on my way.”

At first, Melody was in shock. She knew that melanoma wasn’t good – her step-grandfather has passed away from cutaneous melanoma some years before – but she had no idea that it could invade the eyes. “I was numb – and just couldn’t process what was happening. I cried a lot.”

She called her husband who immediately rushed to her side. He spoke with the doctor and tried to get a better handle on what was happening.

The very next day Melody was sitting in the retina specialist’s office as he carefully examined her, took photos of her eye and tumor, and explained the severity of what she faced.

Her doctor explained that melanoma in the eye, called uveal or ocular melanoma, is a rare subtype of melanoma that affects about 2,500 people, or about 5% of all melanomas diagnosed, each year in the United States.

Uveal melanoma that has not spread beyond the eye can be effectively treated with radiation therapy. However, once spread, it becomes highly resistant to available therapies.

“He went on to explain that in about half of patients, ocular melanoma spreads to other parts of the body, and once this happens there are few effective treatment options,” says Melody. “I left with the understanding that I had two to five years to live.”

A week later, Melody was being examined by a team of doctors at the University of North Carolina at Chapel Hill (UNC) led by ophthalmologist Jonathan Dutton. The team there took new photos, performed an ultrasound, MRI, blood work, and CT.

Her new team of doctors wanted to be sure that they had considered all angles, so they even got a second option with uveal melanoma specialists, Drs. Carol and Jerry Shields, at the Wills Eye Hospital in Philadelphia.

In melanoma, because of the fast-moving pace of research, second opinions can be a critical part of developing your care plan. In addition to making you more comfortable with your diagnosis, they can also give you a different perspective needed to make the best, most informed decision for you. This is especially true for patients with rare melanoma subtypes, such as uveal or ocular melanoma.

“I wanted this cancer out of my body – and even suggested they remove the eye altogether,” says Melody. “Instead, they suggested plaque radiation – which would hopefully kill the tumor so I could move on.”

Plaque radiation is a specific type of radiation therapy used to treat tumors on the eye. For the procedure, a small thin piece of metal – infused with radioactive seeds – is sewn to the eye, aimed directly against the tumor. After a few days, it is then removed.

“Plaque radiation wasn’t painful, but I would call it irritating,” recalls Melody. “I was sent home for four days and spent the entire time camped out on my couch. It was so swollen and sore. It took weeks after it was removed before I could fully open my eye.”

Fortunately for Melody, this temporary discomfort has been worth it. Nine years later, she continues to have no evidence of disease (NED).

“Every time I went to doctor there was this intense fear that it had come back,” says Melody. “You just get back into the swing of things and bam, you have another scan.”

Since her diagnosis in 2010, Melody has become a uveal melanoma advocate virtually and in person.

“I realized how angry I was about this. I was never given guidelines or any clear cut answers,” says Melody. “I had to learn to live with so much uncertainty – would today be the day I learned I was dying?”

Even today, patients with uveal melanoma have still not benefited from the same explosion in treatment advances that those with cutaneous melanoma have access to. Immunotherapy with checkpoint inhibitors and BRAF-focused targeted therapies aren’t effective for most uveal patients.

In response, communities of patients and survivors started to sprout up on the internet. Facebook became home to several, large groups of patients. “I found online groups in 2012, and for the first time, felt like I wasn’t just floating out in space by myself.

As Melody became more plugged into the growing uveal melanoma community, she channeled her anger into action. She kept seeing the same concerns over and over and decided to do something about them.

In 2012 she founded A Cure In Sight, a non-profit organization dedicated to raising awareness, creating uveal/ocular melanoma-specific resources, and improving access to care for patients facing uveal melanoma.

“Today, my anger has gone away and turned into hope. So much has changed in the last decade. So much advancement, more treatment centers, and it’s no longer a hush hush cancer,” says Melody. “Now, we have great doctors and a strong community focused on finding effective treatments for uveal melanoma.”