From Dermatology to Treatment: Second Opinions, Clinical Trials & becoming Your Own Best Advocate 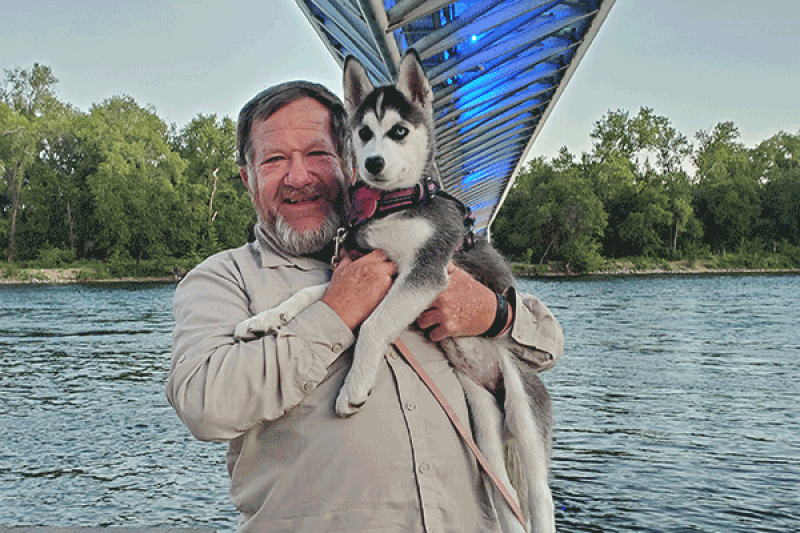 Patrick Rebholtz was never told that he had a significantly increased risk of developing melanoma when he had a basal cell carcinoma and then later a squamous cell carcinoma removed. Instead, he had a pamphlet of things to look out for that he’d thankfully saved from an earlier visit to the dermatologist.

“Looking back, this is really the first instance of many where I wish I knew then what I know now,” says Patrick. “I was raised to believe that what a doctor says is sacrosanct, but I now understand how important it is to advocate for yourself.”

Years later in 2017, Patrick still remembered that pamphlet and has been diligent about checking his skin. After finding a lesion that concerned him, he immediately let his dermatologist know. After an examination, the dermatologist told him it was nothing to worry about.

Thankfully a year later, during a routine exam with his primary care doctor, he spoke up about his concerning mole on his shin. She carefully examined the growth and the look of shock on her face was his first clue that this may be serious. She sent her findings to the dermatologist, requesting an appointment for Patrick.

This time, after insisting it was nothing, the dermatologist removed the lesion.

A week later that same dermatologist called Patrick. The same lesion that Patrick had repeatedly brought to his attention for at least a year, was indeed Stage 2 melanoma. The dermatologist had completely missed it, but fortunately, the pathologist had not.

“In addition to being shocked, I was also so frustrated,” says Patrick. “He had asked me to play a role – and I did my part – but he didn’t do his.”

The surgery was hard. While Patrick had anticipated that a plastic surgeon would place a skin graft to help close the lesion in order to minimize scarring, no such procedure was done. A week after the surgery an infection set in and the wound needed to then be packed with gauze 3-4 times daily to prevent further infection and to help it heal. It was a slow and involved healing process.

“Once again, I was dejected by what had happened,” says Patrick. “I now have a really disfiguring scar that I think could have been avoided with a plastic surgeon, and a longer healing process than anticipated. Again, if I knew then what I know now – I would have pushed harder to make my wishes known.”

During the surgery, they also performed what is called a Sentinel Lymph Node Biopsy (SLNB) – which is used to determine if melanoma has spread from its site of origin to the lymph nodes. Patrick’s SLNB came back positive – meaning that melanoma had started to spread to his lymph nodes. It also meant that instead of Stage 2 melanoma, Patrick had Stage 3.

His surgeon recommended removing all lymph nodes from his groin and thigh region, what doctors call a Complete Lymph Node Dissection. This time, Patrick did not follow his surgeon’s orders without question – and instead, he sought out a second opinion.

Second opinions are often extremely helpful due to the fast-paced nature of melanoma research. By speaking to someone else about your case you can get additional information needed to fully understand what’s happening or to make the best, most-informed decision for you.

As luck would have it, around that same time, Patrick met another cancer patient who seemed to be doing well. “This guy went from Stage 4 cancer to today being cancer-free,” recalls Patrick. “I wanted to see his doctor.”

“I had no idea that there are so many different avenues of attack when it comes to cancer,” says Patrick. “Surgeons want to cut and medical oncologists have different tools.”

Instead of more surgery, Dr. Daud suggested starting a year’s course of Opdivo, or nivolumab, as an adjuvant therapy to remove any trace remains of melanoma in Patrick’s body.

Dr. Daud then recommended an experimental approach called TAVO™ that he and other researchers were studying in a clinical trial. Clinical trials offer patients access to treatment approaches that may prove more beneficial than anything currently approved by the FDA.

TAVO, an experimental therapy from OncoSec, is delivered directly into tumors by injection. It consists of DNA that makes a protein called interleukin-12 or “IL-12” that activates T cells. TAVO is also paired with a short sequence of energy pulses that helps it enter tumors and their surrounding cells. Researchers believe that this will help TAVO more effectively activate T cells.

Initial data from a phase 2 trial (NCT03132675) of TAVO combined with pembrolizumab in melanoma patients whose tumors had advanced on anti-PD-1 therapy showed a 22.2% best overall response rate. Supporting studies suggest that the therapy helped to ‘recruit’ T cells directly to the tumors and generated a robust anti-tumor T cell response.

In results published in Clinical Cancer Research on May 6, 2020, from a Phase 2 clinical trial – TAVO + Keytruda, 41% of patients responded to the combination with 36% having a complete response.1 This response rate is very encouraging because all the patients in the study had previously seen their cancers progress on PD-1 therapy alone.

At this point in his journey with melanoma, Patrick had learned his lesson about leaping before he carefully looked. Before he’d enroll in any clinical trial, he wanted a second opinion to understand all his treatment options.

“Even at this point, I didn’t understand how everything fit together,” says Patrick. “But I knew that there is so much happening in melanoma that you have to do your homework. I wanted to be sure that TAVO was right for me.”

Patrick decided to visit City of Hope National Medical Center in Los Angeles for a second opinion. After meeting with a medical oncologist there and considering the trials that they had available – ultimately – the City of Hope oncologist agreed with Dr. Daud’s suggested treatment plan.

Back in Dr. Daud’s office, Patrick still had questions. He was adamant that he not enroll in any clinical trial that offered a ‘sugar pill’ as the control arm. Dr. Daud carefully explained that in modern clinical trials, an experimental therapy is always compared against the existing standard of care – no one gets a ‘sugar pill’ like in the movies. Learn more about other clinical trial myths here.

This made Patrick feel better about the situation. “I knew I was in a fight for my life and his reassurances made me feel better. He also made it clear that I’d be carefully monitored while taking part in the trial for any changes to my health.”

As part of the clinical trial, Patrick receives Keytruda infusions every three weeks with the addition of TAVO injections to the accessible lesions on days 1, 5, and, 8, every 6 weeks.

“The short electrical pulses, can hurt but it is over in a matter of seconds, and then the pain subsides immediately,“ says Patrick. “Sometimes, I catch myself wondering when the boot will fall, because right now – I’m not dealing with any of the side effects other treatments can impose on you.”

Six months after starting the clinical trial, Patrick’s melanoma is clinically stable. Two of his three lesions seem to be responding well to the treatment – and his doctor is optimistic.

“Melanoma is one of the most creative and devious things humans deal with,” says Patrick. “It’s a life-or-death chess match – we raise the stakes and so does melanoma. It’s a moving target – and I never realized that."