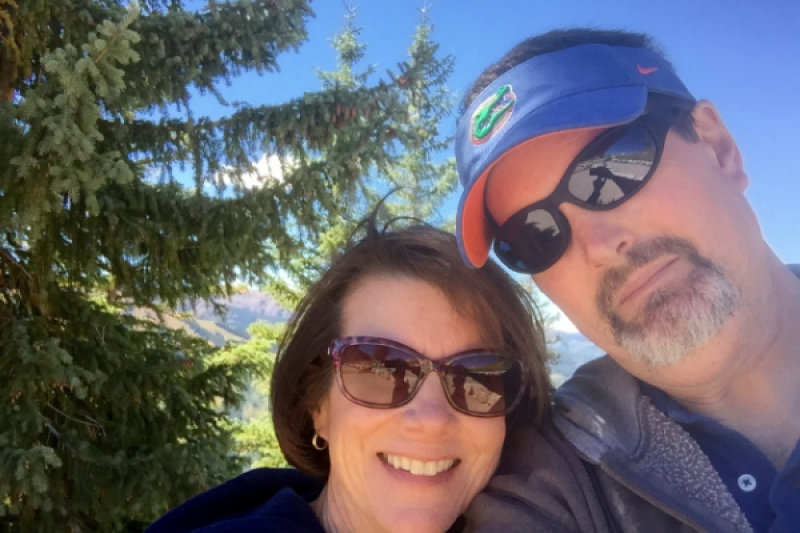 Ken Billett’s life-long journey with melanoma began in 1995 when he took a leap of faith and had a spot checked out on his shoulder at a health expo. He knew that he had had more than his fair share of sunburns growing up in Florida during the 60’s and 70’s, and with light hair and blue eyes, he decided it was better to be safe than sorry.

The doctor agreed that the spot was suspicious and a biopsy confirmed it was melanoma. Fortunately, it was still melanoma in situ – and was removed through surgery.

Ken was relieved. “I remember feeling like I was done. They removed it and I was fine,” he says.

In retrospect, despite successful surgery, this first melanoma was anything but one and done. It was a warning shot across the bow – and would be the first of 8 additional melanomas and 1 basal cell carcinoma that would be diagnosed and surgically removed over the next 15 years.

Ken understood that he was at increased risk both for a recurrence and for altogether new melanomas, so he practiced sun safety and saw a dermatologist regularly for full-body skin exams.

It felt manageable until 2011 when his delicate song and dance with melanoma took a turn for the worse. He’d had a spot on his back biopsied; the results came back negative. Months later, it still didn’t look right – so he had it re-checked. He saw his dermatologist the next day – and this time – he wasn’t so lucky. This time, the melanoma was Stage 2 – and a surgeon would need to remove a tennis-ball shaped excision around the tumor to achieve clear margins.

Recovery was long. Due to the location of the tumor, he needed weeks of physical therapy to regain his strength and range of motion. While deep, there was no evidence that the melanoma had spread to nearby lymph tissue. Despite this, his surgeon recommended that he get regular imaging scans to be safe.

For the next two years, things went well. Then – on July 24, 2013 – everything changed when his doctor told Ken and his wife: “You’ve got some spots that are lighting up your lungs.”

A week later a fine needle aspiration – a type of biopsy – was used on the biggest spots. Both came back as melanoma.

“It felt like a gut punch,” recalls Ken. “Sitting in that exam room with my wife, I remember everything just went into slow motion, the colors faded away, and it was like I had tunnel vision. I left like a zombie of myself.”

When his doctor offered a prognosis of just nine to 12 months, his wife, Vicki, audibly gasped.

“Thinking of that reaction, I still shudder to this day,” says Ken. “It was like the floor just fell out from under us, and then we had to go home and tell everyone. It was just so overwhelming.”

After the shock of diagnosis, Ken’s biopsy samples were sent to two labs for comprehensive biomarker testing. For patients like Ken whose melanoma has spread, determining which specific mutations are present in the tumor is an important part of understanding all treatment options. This type of testing is a core component of Precision Medicine or the idea that treatment decisions should be made based on a genetic understanding of their disease.

About half (40 – 50%) of cutaneous melanoma have mutations in the BRAF gene. Tumors with this mutation can be treated using targeted therapies or medications that shut down the mutated molecules to slow the growth of melanoma cells—without harming healthy tissue.

Sometimes, comprehensive biomarker testing reveals mutations that already have FDA-approved treatments in other cancer types. This gives a patient and their treatment team as much information as possible to customize their treatment approach.

This was the case for Ken. His testing revealed that he didn’t have a BRAF mutation, but he did have a rarer cKIT mutation. In melanoma, only about 7% of tumors are cKit mutant, and there are no FDA-approved treatments for this indication.

Although there are no FDA-approved treatments for cKit-mutant melanoma, fortunately for Ken, cKit mutations are far more common in other types of cancer like leukemia. In fact, the FDA approved imatinib (Gleevec), the first medication blocking this mutation, in 2001 for chronic myelogenous leukemia.

Three months after starting imatinib, two of Ken’s tumors had shrunk and the rest were stable.

Since then, things have remained more or less the same. He has continued to take imatinib for the last six years, and while he does have detectible disease, the tumors have remained stable.

“I get worn down sometimes – and get general aches and muscle cramps. I look tired and sometimes, I feel tired. It’s not great, but it doesn’t keep me from living my life,” says Ken.

During the last six years, he’s seen both his kids graduate high school and then college. He’s taken an interest in gardening, reading, volunteering, and traveling. In addition, Ken has become an advocate for melanoma research and for those living with – and surviving – cancer. He keeps a blog of his melanoma journey and, most recently, has become more serious about a writing career.

Melanoma has also left an imprint on Ken’s family. “Vicki has been my rock throughout this entire process,” says Ken. “She goes with me to every appointment. She also tackles all of the insurance forms and doctor’s bills so I can focus on getting better. Most importantly, she’s the ultimate glass-half-full person.”

Ken and Vicki have always tried to be upfront with their two children about what was happening, but have always insisted that they focus first and foremost on their own lives. So, they graduated high school and then college – both times with honors. “They really are troopers in the way they handled my diagnosis,” says Ken.

Ken has lived with and in the shadow of melanoma since 1995, but he isn’t your typical patient and he hasn’t been cured of melanoma. He also doesn’t like being called a survivor. Ken is living with melanoma.

“Melanoma doesn't run my life,” says Ken. “I have to be aware of it – taking the medicine, managing side effects, and being sun safe. But hey, I still go to the beach. I'm not going to stay inside and watch the world go by. I still live my life – I just have to be smart about it."