Melanoma Clinical Trial Success Story: From Patient Volunteer to No Evidence of Disease 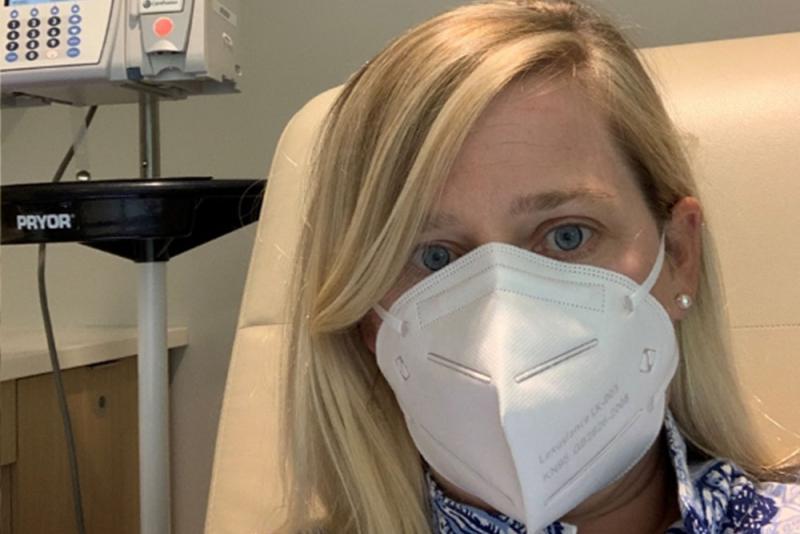 Shannon Albino, elementary teacher and mom of three from New Jersey, first noticed a lump under her arm while throwing her son’s hockey bag over her shoulder. She felt some pain, but didn’t think much of it at the time, especially since she just received an all clear after her first mammogram a few months earlier.

A week or so later, Shannon visited her doctor for a routine physical exam and brought the lump to her attention. She suggested Shannon schedule another mammogram. A couple of weeks later at the follow-up appointment, doctors decided to biopsy the lump, but nobody raised any alarms. That all changed when Shannon’s doctor returned to the room and said to her, “This isn’t good. What is your history with melanoma?”

“I guess it starts today,” Shannon, only 39-years old at the time, told her doctor after taking a moment to process what she was just told. Because the lump under her arm – rather than a mole – was how her melanoma was discovered, it was clear it had metastasized and was already more advanced. However, Shannon would still need to undergo further testing to confirm the staging, learn whether she had a BRAF mutation (making her eligible for targeted therapies), and try to identify where the melanoma originated.

Rob, Shannon’s husband, decided on a whim to accompany her to the appointment and was sitting in the waiting room unaware of what she was learning. She texted him that things had taken a turn and asked if he would join her. At the time, neither Shannon or Rob knew much about melanoma, except that the word “metastatic” was never good.

Shannon and Rob left the appointment not only in shock, but with very little information except that the melanoma was advanced. “It was all a blur – but we both knew we had to snap back to reality quickly. Our daughter had a ballet recital that night, and we weren’t ready to tell the kids just yet. We wanted to find the best way to tell them,” Shannon remembered.

Deciding Where to Go for Melanoma Treatment

The couple’s first course of action was to decide where Shannon would go for treatment. Due to their proximity to New York City, they knew they had a lot of options – and they wanted to find the best possible option for Shannon.

Shannon and Rob talked to her doctors about possible treatment centers, but ultimately turned to their close friend Brianna for help. Brianna was not only a doctor, but she recently had experience helping a family member with metastatic melanoma navigate his diagnosis and treatment.

Brianna referred Shannon to Dr. Margaret Callahan at Memorial Sloan Kettering Cancer Center in New York City. After the first appointment, parts of Shannon’s diagnosis and potential treatment plan were starting to become clear. Dr. Callahan confirmed Shannon’s diagnosis as Stage 3 with unknown primary origin (meaning that her doctors were never able to identify a mole or lesion where her melanoma first appeared).

Dr. Callahan presented Shannon and Rob with a variety of treatment strategies, including a clinical trial. The trial was comparing an experimental immunotherapy that would later be called Opdualag, which combined Opdivo (nivolumab) with a totally new drug called relatlimab, against Opdivo alone. If Shannon were to enroll in the trial, it would mean waiting two months for surgery to remove the melanoma, in order to receive two rounds of the trial combination treatment first – what experts call neoadjuvant therapy.

Initially, Rob was opposed to Shannon enrolling into the trial. Not only was he worried about Shannon waiting even longer to remove the melanoma, he was skeptical of clinical trials in general. “He didn’t want me to be a Guinea pig or for anyone to take advantage of me,” Shannon remembered. Shannon, on the other hand, was intrigued by the trial and wanted to consider it as an option. 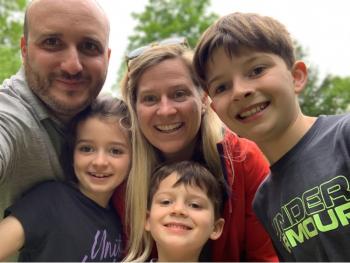 In their discussions, doctors dispelled some of the myths surrounding clinical trials and assured Rob that treating Shannon’s melanoma came before all else. They explained to the couple that being on the trial meant that Shannon’s melanoma would be monitored more closely than if she decided to do one of the standard therapies that have already earned FDA approval. “They told me that if things weren’t moving in the right direction, I could walk away at any time. That the patient comes first, before anything else in the trial,” Shannon recalled.

Ultimately, Shannon decided to move forward with the trial, with Rob’s full support.

Having decided on a treatment plan, the couple then sat down with their children – ages 10, 7, and 4 at the time – and explained Shannon’s diagnosis, how the doctors were going to help her, and assured them that everything would be okay. Everybody was nervous, but they tried to focus on the positives and stressed the importance of taking things one step at a time.

Shannon received her first infusion of Opdualag for the trial and felt great. But the second round of infusions caused an allergic reaction. Shannon’s mom always advised her to speak up and advocate for herself, which is exactly what she did. As a result, Shannon and the trial leaders got together and decided to try administering the treatment to her at half the speed, so that her body might tolerate it better.

With two rounds of treatment completed, surgery was next – but the world had other plans. It was early March of 2020, and the COVID-19 pandemic was just starting to get serious.

It was around this time that Shannon and her family decided to rent a house in the Catskills to get out of the confines of their city apartment. While there, Shannon got a call from her surgeon warning her that hospitals were about to cancel all non-emergency surgeries – and suggested that she come in the very next day.

Not wanting to delay her surgery any further, Rob dropped her off at MSKCC. Despite what was previously planned, she had to go into surgery alone and she was no longer allowed to stay the night. And amid the chaos and confusion, Shannon was exposed to COVID during her time in the hospital.

While recovering from the surgery, which removed the melanoma tumor and all surrounding lymph nodes, Shannon had to fully isolate in the basement of the family’s Catskills rental. “This was my lowest point. Getting through that time made us realize that we could get through anything,” Shannon said.

After two infusions, Shannon underwent a successful surgery where doctors removed all affected lymph nodes and tested them, revealing No Evidence of Disease (NED). Within several weeks, she went from a shocking Stage 3 diagnosis to showing a complete response to the then experimental Opdualag. Continuing the trial, Shannon received the remaining ten rounds of treatment, finally finishing all twelve infusions in April of 2021. The day after her last round of treatment, a package arrived at Shannon’s door. It was a bell, sent to her by Brianna, so that Shannon could ring it to celebrate all she had accomplished.

After completing her treatment cycle, Shannon had regular tele-medicine appointments with her oncologist, as well as scans every three months to make sure her melanoma did not return. All her scans were clear, so Shannon recently moved to a six-month scan schedule. “It was a big celebration, and I feel very confident moving into this next phase,” she said. 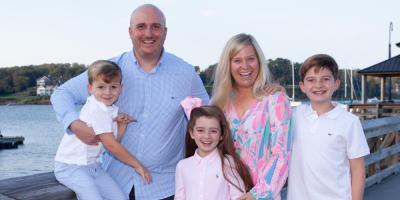 In March of 2022, the combination of immunotherapies nivolumab with relatlimab tested in Shannon’s clinical trial earned FDA approval under the drug name Opdualag. The trial determined that patients receiving Opdualag lived more than two times longer without melanoma growing, spreading, or getting worse when compared to patients receiving nivolumab alone.

Shannon felt immense pride when she learned that Opdualag received FDA approval and that she was an integral part of a very important advancement in melanoma research. Still, despite her positive experience, Shannon was exposed to many of the myths and skepticism surrounding clinical trials and hopes that her story will make a difference.

“When people in our lives learned that I was part of a clinical trial, their expressions completely changed. They thought that meant there were no options left for me,” Shannon recalled. That couldn’t have been further from the truth for Shannon. The clinical trial was offered to her as an equal – and potentially better – option to FDA approved treatments and surgery. “This was entirely our choice,” she said.

In the future, Shannon hopes to see more support for clinical trials and the patient volunteers who make them a reality. She is certainly grateful for those volunteers who came before her. Through it all, her family was her North Star, guiding her decisions and giving her hope for a future without melanoma. “My kids were the biggest factor in all of this,” said Shannon. “Heaven forbid this disease is part of their future - I want to know that everything possible is being done to make things better.”