Melanoma Leaves a Mark – but Not Always the One You Think 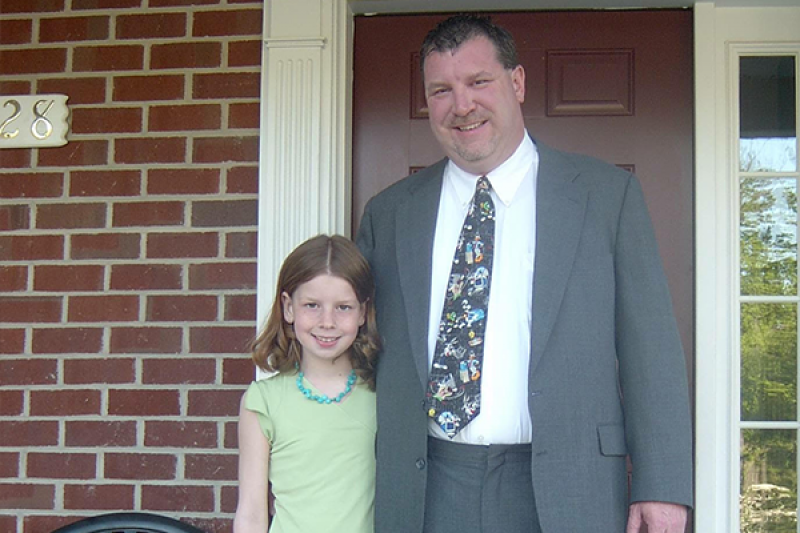 Melanoma is no stranger to University of Delaware Senior Samantha Stinchcomb. In fact, this silent killer has been part of her life for the last 11 years – over half her life. She learned the hard way, at the sobering age of 13, that melanoma ‘isn’t just skin cancer’ when her father lost his three year battle with the disease. Since then, Samantha has been diligent about her own skin – and has had 16 precancerous moles removed. “It took my father, my best friend, from this earth and my life. In the almost 8 years since my dad’s been gone,” said Samantha. “I’ve also learned melanoma doesn’t plan on getting out of my life anytime soon.”

Samantha may have been just ten when her father was first diagnosed with melanoma, but her parents were open with her about what was happening. She quickly learned about immunotherapy, clinical trials, and lymph nodes. Cancer became part of her everyday world.

Unfortunately, there were only two FDA-approved treatments for melanoma when Samantha’s father was diagnosed. Both had relatively low success rates. Since then, 11 new FDA-approved treatments have come onto the market and hundreds of clinical trials are examining future treatments. But none of these options came in time for Samantha’s dad. Just three years into his fight, doctors said that there was nothing that they could do. Samantha’s dad, Wayne Stinchcomb, passed away shortly thereafter on April 27, 2010.

Shortly after the death of her father, she and her family decided that they weren’t going to sit down and take it. “We decided this wasn’t going to be the end of my dad,” said Samantha. Just six months after his passing, they founded the Wayne Stinchcomb Big Orange Foundationand hosted their first awareness event in his memory. The event, a bull roast, was a big party that included all of her dad’s favorite songs, an auction, prizes, food, and drink. The ninth annual event will take place in October. “When you lose a parent, keeping their memory alive is the best thing you can do,” said Samantha.

To date, the Big Orange Foundation has donated $140,000 to the Melanoma Research Alliance to advance the fight against cancer. This month, a MRA Young Investigator Award was issued in the name of Samantha’s father.

“We love that 100% of all donations go directly to research – no one else can say that,” said Samantha. “Research means more tomorrows – more time to make memories with those I hold most dear.”

In addition to raising funding for melanoma research, Samantha and the Big Orange Foundation also raise critical awareness of melanoma in their community. By sponsoring Orioles Game and hosting pool parties that combine fun in the sun with the ABCDEs of melanoma– they are helping people understand just how dangerous melanoma can be. “Too many people think that melanoma is just skin cancer,” said Samantha. “It isn’t – it took my dad.”

The biggest piece of advice that she gives people is to take melanoma seriously and if something doesn’t feel right to you – meaning you are noticing a changing mole or one mole doesn’t look like your others – get it checked out. “For melanoma, the sooner something is dealt with the better.”

Samantha is proud of what she and the Big Orange Foundation have accomplished. She’s also proud that her father has had such a lasting imprint in so many people’s lives that he is still inspiring people to act. “It really speaks volumes about my dad, as a person. So many people are committed to making sure he makes a lasting mark on this world.”