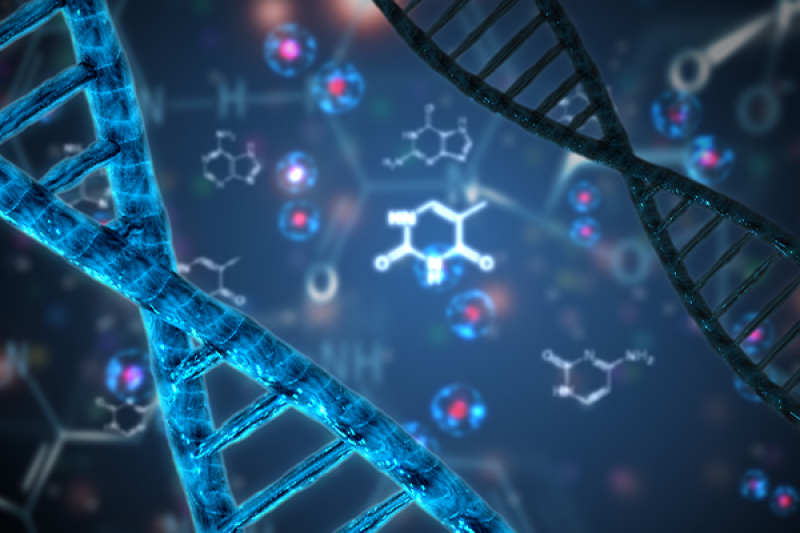 Cancer is caused by mutations in our DNA that allow cells to grow uncontrollably – and eventually invade surrounding tissue. Melanoma is a specific type of cancer that is formed in pigment-containing cells, known as melanocytes, which are found primarily in the skin but also in places like the eye and on mucous membranes.

While most gene mutations are harmless, others are not and can spur the formation of cancer. Just like baking a cake, if you use the wrong ingredients or the wrong amount – your cake may not turn out. Genes are the recipe our cells follow to make proteins. Any mutation – or recipe misprint – can instruct our cells to create inappropriate amounts (either too little or too much) which can have dramatic effects on the way cells divide and grow. Mutations can also alter a protein in such a way that it no longer functions at all or functions too much, as if it doesn’t have an ‘off’ switch.

Cancer develops when genes in our cells become mutated in a way that affects growth or division. Researchers call these genes ‘tumor suppressor genes’ because they protect cells from becoming cancerous. Sometimes, cancer develops when a damaged cell refuses to die through a process called apoptosis that allows it to be recycled and reformed by the body. Researchers call genes that control this process ‘oncogenes’ because they transform a cell into a cancerous cell.

Mutations are caused by many things such as tobacco, alcohol, pollution, or in the case of melanoma, Ultra Violet (UV) radiation. In fact, an estimated 90% of melanomas can be directly attributed to UV radiation from the sun or indoor tanning devices. UV rays literally mutate the genes in our cells – and eventually – cause cancer. This is why preventive measures – like seeking shade, applying sunscreen daily, and wearing UPF clothing – that keep you safe from the sun are so important!

Mutations Can Cause Cancer and May Be Key to Treating it

Thanks to advancements in research, the same mutations that cause cancer are proving helpful in treating it. Precision medicine, sometimes called personalized medicine, is the idea that cancer treatment should be selected based on a genetic understanding of a specific patient’s disease.

Targeted therapies were created to take advantage of specific mutations to treat cancer. We call these ‘Targeted Therapies’ because they interfere with and shut down specific abnormal proteins in tumor cells. In melanoma, when we talk about targeted therapies, we generally mean combination BRAF + MEK inhibition – but this is not always the case.

Immunotherapies were pioneered in melanoma because of the high number of mutated genes present. Researchers think this high mutational burden makes it easier for the immune system to identify cancer if given the right jolt. Drugs and approaches pioneered in melanoma are now approved – or are being tested in – dozens of other cancer types.

BRAF/MEK and Melanoma
About 50% of cutaneous melanomas have a mutated or damaged copy of the BRAF (pronounced bee-raf) protein. A BRAF mutation makes the cell divide out of control and resist death, causing cancer. Researchers call this a ‘driver mutation’ because it gives the mutated cell a survival advantage over other cells in the body.

The first BRAF inhibitor, Vemurafenib (Zelboraf®), was approved by the FDA in 2011. For patients with a BRAF mutation, it was a major breakthrough. BRAF inhibitors, taken daily by mouth, rapidly ‘melt’ tumors away. Unfortunately, most patient’s melanoma develops resistance and starts to grow again by circumventing BRAF using an alternative pathway (generally MEK) – this is what researchers call acquired resistance.

Two years later, the FDA approved the first MEK inhibitor, Trametinib (Mekinist®), and in 2014 it approved the first combination BRAF/MEK therapy, Dabrafenib (Tafinlar) + Trametinib (Mekinist). Clinical trials confirm that combining BRAF/MEK inhibitors together is more effective than either approach on its own. Today, two additional combinations have also earned FDA approval Vemurafenib (Zelboraf®) + Cobimetinib (Cotellic™) in 2015 and Encorafenib (Braftovi) + Binimetinib (Mektovi) in 2018. While each of them act on the same pathways (BRAF and MEK) and have similar efficacy, they each also have a distinct side effect profile.

Other Mutations and Melanoma

Approximately 70% of all melanomas have mutant copies of the BRAF, GNA11, GNAQ, KIT, MEK1 (MAP2K1), or NRAS protein. In general, these mutations are mutually exclusive, meaning that you’ll only see one mutation in each patient. The specific mutation found in melanoma tends to vary by melanoma subtype:

While the FDA has only approved Targeted Therapies specific to BRAF/MEK in melanoma, other mutations may be ‘actionable’ using drugs approved for other cancer types or those still in clinical trials. For example, KIT-mutant melanoma can be successfully treated in some patients using drugs originally intended for leukemia. Mutations are considered ‘actionable' if there are drugs designed to specifically act on them. Also – due to the incredible pace of research – mutations (or targets) that are not actionable today may be so in the future.

Keep in mind that you have many treatment options, and just because you have an actionable mutation in your melanoma – that doesn’t necessarily mean that targeted therapies are right for you. Talk to your doctor about the all of your treatment options, including clinical trials.

Comprehensive Biomarker Testing, also known as genetic/genomic testing of your tumor, is the only way to know which mutations are in your tumor and if targeted therapy may be an option for you.