One Family, One Community, One Goal: Cure Melanoma 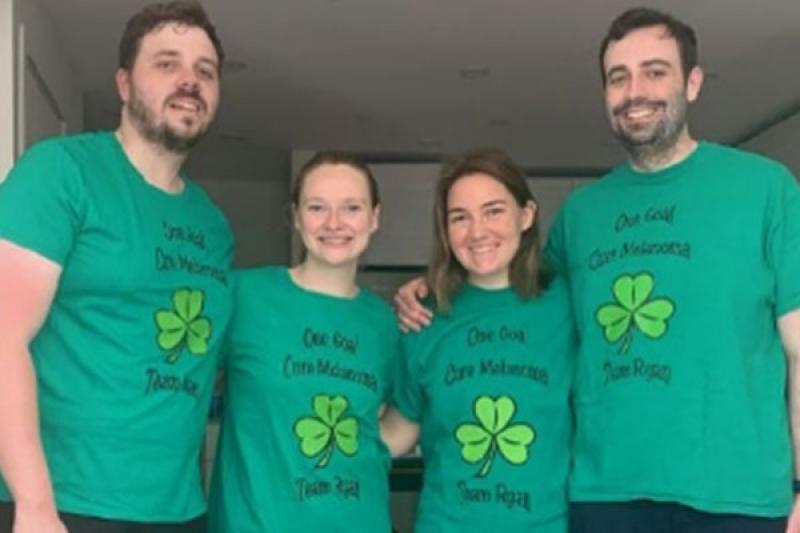 Melanoma is personal for Kathy Mason, and positivity is a way of life since her son Ryan’s Stage 3 melanoma diagnosis at only 24-years old.

During one of Ryan’s visits home to New Jersey in 2014, he mentioned a lump on the side of his neck. What Ryan and his family initially thought to be a cyst, was biopsied and identified as melanoma with no known primary origin.

“The depth of what melanoma can do to people is mind-blowing,” reflected Kathy on watching her son’s melanoma journey unfold. “We had a really hard time saying the word ‘cancer.’”

Within a week of his diagnosis, Ryan had surgery to remove the lesion and surrounding lymph nodes. Following the surgery, Ryan underwent radiation therapy, as an adjuvant therapy to reduce risk of recurrence. However, just six months later, scans revealed that his melanoma had returned and metastasized throughout his stomach.

Following this discovery, along with an inoperable tumor in his lung, Ryan underwent immunotherapy infusions for 18 months. Despite many setbacks along the way of his three-year journey with melanoma, Ryan and his family maintained a positive outlook.

While Ryan underwent treatment, Kathy and her husband Chuck rallied together friends and family to participate in melanoma benefit walks in his honor. The first fundraiser walk they did after his diagnosis would be the start of an annual tradition for the family to raise money and awareness for melanoma, in honor of Ryan and countless others fighting similar battles.

Today, Ryan is 4 years in remission, but the goal of ending melanoma for all is still at the forefront of his family’s mind. Kathy and Chuck now live in North Carolina, and they brought the fight with them. This May, for Melanoma Awareness Month, Kathy decided she wanted to host her own walk to raise awareness and money for melanoma research. 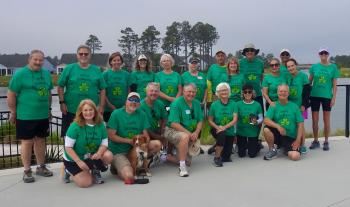 Kathy took lessons learned from the previous walks she participated in, and rather than form a team and participate in a local walk hosted by an outside organization, she wanted to plan and host the event herself. As the President of the unWINE'd Club, a social group within her tight-knit community, Kathy was no stranger to planning fun events. She brought up the idea of a 5K benefit walk to the club’s VP Lori Jones and Secretary/Treasurer Dawn Buboltz-Hottes, and they all teamed up and got to planning the event. Lori handled the solicitation of local merchants and sponsors, Dawn led the communications and outreach to the community, and Kathy coordinated the timeline and logistics.

While searching for the right organization to receive the proceeds of the walk, Kathy came across MRA’s commitment to 100% of donations going directly to research. She made sure to center MRA’s mission and background in all of the materials going out to the community while promoting the event. “I think that made a difference. When people heard that 100% of the money raised would go to research, they were excited and we got great feedback,” she said.

Not only was Kathy giving to melanoma research in honor of her son, but she also wanted to give back in a meaningful way to the community that was showing up with so much enthusiasm. With that in mind, on the day before the walk, Kathy invited a dermatologist and Mohs surgeon into her community to discuss melanoma awareness, prevention, and the importance of early detection. Some of the topics discussed were the ABCDE’s of melanoma, information on different types of sunscreens, and how to practice melanoma prevention on a budget. The talk was well-received, and several people said they were inspired to make an appointment with their dermatologist. “Awareness was so important to me in the planning of this event,” says Kathy. “I didn’t want it to only be about fundraising. Bringing an educational piece into it was crucial.”

When the big day came around, 124 members of the community came together to support melanoma research. Some people walked the 5K while others ran, some created teams and sported custom t-shirts, and others came as spectators to cheer on their neighbors. Ryan and his fiancé were even able to participate virtually from New York City, joined by his brother Conor and his girlfriend. Many other friends and families joined the walk virtually. Kathy learned that melanoma was not only personal for her, but also for many of the walk’s participants. “I was honestly taken back by how many people have been touched by melanoma,” she explained.

Kathy’s initial goal for the walk was to raise $4,000 for MRA and melanoma research, but the event ended up blowing this goal out of the water. Ultimately, it raised $15,290. That same day, her neighbors and community members were already talking about making the walk a yearly tradition. With the immense success of this first walk now several months behind her, Kathy is proud of all she and her community accomplished and is looking forward to 2022. “This means too much to too many people,” Kathy said, “I’ve always believed in research, but I do now more than ever.”

Learn how you can host your own fundraiser to support MRA and melanoma research here.