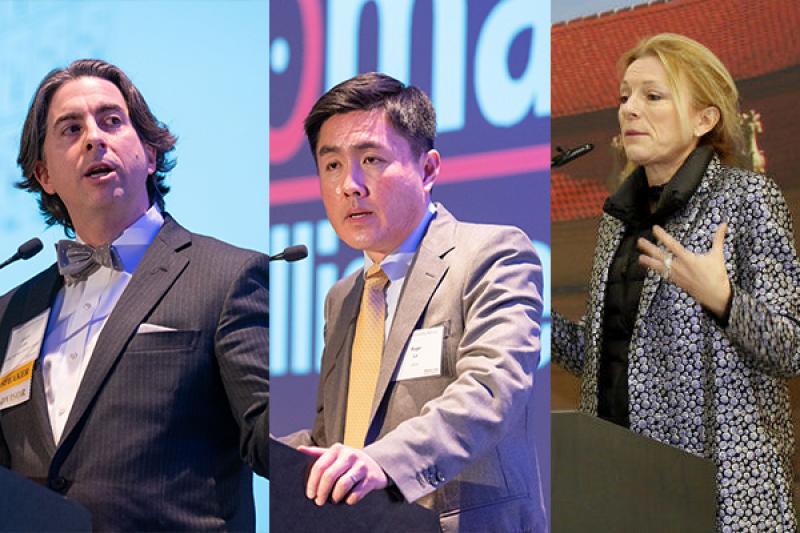 About half of all patients given cancer immunotherapies do not respond to them, and although targeted therapies often dramatically shrink tumors in most patients, in about three-quarters of those patients, the treatments stop being effective weeks to months after initially killing tumor cells. “That leaves a lot of room for improvement,” stressed Dr. Russel Jenkins of Massachusetts General Hospital.

Fortunately, researchers have recently made progress in understanding what causes some types of resistance to immunotherapies or the acquired resistance seen in targeted therapies. This understanding is providing potential new treatment options to enhance response to current melanoma therapies.

Dr. Jason Luke, of the University of Pittsburgh, reported his lab and others have used different state-of-the-art genomic technologies to analyze tumors from patients unresponsive to current immunotherapies to identify ways in which the immune system can be turned on in these patients. His laboratory’s findings uncovered a number of important proteins that when targeted with drugs could enhance the effects of checkpoint immunotherapies — such as nivolumab and pembrolizumab — leading to better destruction of melanoma cells. His findings also revealed that the cell machinery that presents certain tumor specific proteins, called antigens, to train the immune system to destroy tumor cells can be defective in melanoma. “Treatments that augment antigen presentation could be high-priority strategies to take into the clinic,” Dr. Luke stressed.

One of those strategies was identified by a special technology called single cell transcriptomics done by MRA-funded investigator Dr. Jean Christophe Marine, of VIB in Belgium, and his colleagues. They found a master switch that enables melanoma cells to suppress antigen presentation. “This switch is a promising therapeutic target that could be blocked by existing drugs to make patients’ tumors more responsive to cancer immune therapies,” said Dr. Marine.

He also uncovered a different switch called PRRX1 that enables melanoma cells to migrate to other sites. PRRX1 is thought to play a role both in tissue repair and in cancer metastases and can be triggered in melanoma cells in response to targeted therapies, Dr. Marine and others found in mice and human melanoma cells. “These rare PRRX1- positive melanoma cells fuel metastasis in mice,” he said. Conceivably, a drug that blocks PRRX1 might enhance response to therapy and prevent melanoma metastasis

Another therapeutic target to potentially boost response to commonly used checkpoint immunotherapies such as nivolumab or pembrolizumab is a protein called TBK1. Dr. Jenkins’ experiments using mouse and patient tumor- derived models found that when he blocked TBK1 onits own, he wasn’t able to reduce or stop tumor growth.

But when a TBK1 inhibitor was applied along with a checkpoint immunotherapy, the combination “dramatically sensitized tumor cells to die,” Dr. Jenkins said. “Our results demonstrate that targeting TBK1 is a novel and effective strategy to overcome resistance to immune checkpoint blockade.”

Several researchers have also helped to uncover the major role that microbes (microscopic organisms like bacteria) in the gut have in influencing response to checkpoint immunotherapies. Investigators have recently zeroed in on a small group of intestinal bacterial culprits that consistently fuel cancer progression and lack of response to treatment in a number of studies. Dr. Laurence Zitvogel, of the Institut Gustave Roussy in France, reported that certain species of bacteria are found more commonly in the gut of patients with cancer compared to healthy individuals. These same species of bacteria become the dominant variety in the small intestine after many types of antibiotic treatments, crowding out “good” bacteria. She found the “bad” bacteria trigger stress molecular signaling that inflames the lining of the small intestine and boosts the number of T regulatory immune cells in the intestine. These cells then migrate to tumors where they suppress an immune response.

After uncovering the molecular pathway triggered by these “bad” bacteria, Dr. Zitvogel discovered that commonly used drugs called beta blockers could disrupt it. She found that when she gave the beta blocker drug propranolol to mice with tumors, it improved their response to immunotherapies. Others found that melanoma patients taking propranolol have improved survival. “Propranolol may be a good friend of melanoma patients,” Dr. Zitvogel stressed.

She also reported that when investigators gave melanoma patients unresponsive to immunotherapy fecal material containing the “good” bacteria of patients who responded to the immunotherapy, the non-responders overcame treatment resistance one-third of the time. In those cases, researchers found that the “good” bacteria from the responders had colonized in the gut of the previously unresponsive patients. The treatment also reduced the inflammation and signaling in the intestine thought to promote cancer progression. “This was good news for responders—the treatment completely reprogrammed their gut microbiome signaling,” said Dr. Zitvogel.

Another potential way to overcome resistance to checkpoint immunotherapy faced by many patients is to combine immunotherapies with radiation therapy, Dr. Luke suggested. “Radiation can drive the enhancement of a T cell response,” he said. He also stressed that the treatment paradigm in radiation oncology is likely to change in the near term with the advent of the new technology called image-guided radiotherapy, which uses a molecular tracer to guide radiation towards multiple and often microscopic tumor sites. Such radiation therapy could be combined with immunotherapy and potentially could be quite effective.

Dr. Roger Lo and his colleagues at the University of California Los Angeles have been exploring what causes acquired resistance to targeted therapies. One way they approached this problem is based on their prior discovery that melanoma often times are more responsive to BRAF/ MEK targeted therapy when the patients’ immune or T cells come into the tumor and join the fight. However, melanoma tries to get around the T cells by over-producing a protein called PD-L1. This suggests that a drug that can prevent this immune-escape strategy the tumor cells rely on might be a combination drug with BRAF/MEK-targeted therapy. Dr. Lo and his colleagues went to work to discover proteins that degrade PD-L1 in this situation, hoping to then uncover a compound which can activate this natural PD-L1-degrader. After extensive efforts on these fronts, they found that ITCH can degrade PD-L1 produced by the melanoma cells and that an ITCH activator or “agonist” could shut off the tumor immune suppression that occurs in mouse melanoma when they become or acquire resistance to BRAF/MEK targeted therapies. “There’s now an identified protein, ITCH, for developing agonists that can potentially synergize with targeted therapy in melanoma and prevent resistance,” Dr. Lo stressed.

“We have made significant progress to understand the root causes of resistance and identify new treatment strategies to make immunotherapies and targeted drugs more effective,” said MRA’s Chief Science Officer Marc Hurlbert. “But we still have a way to go to combat this critical problem and that is the reason why drug resistance remains as a top research priority for MRA."