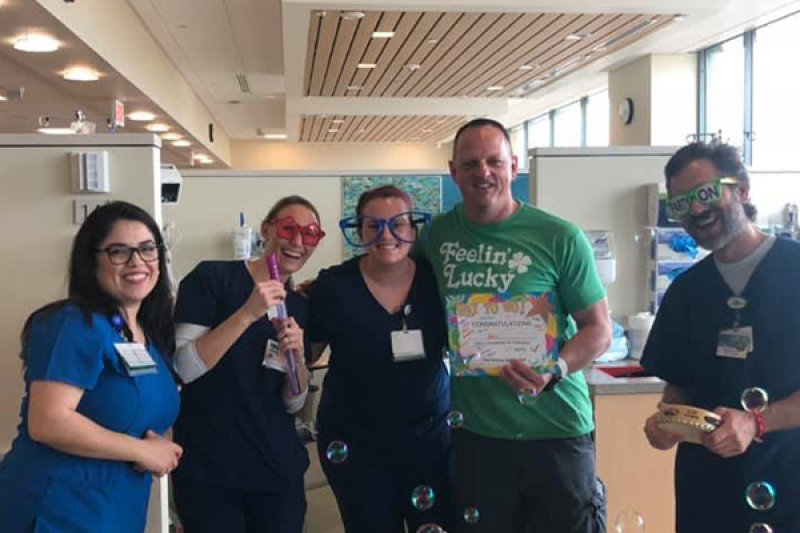 Lieutenant Chris Eyrich of the Phoenix Police Department has patrolled the streets of Arizona for more than 20 years. Each day, he routinely wears a variety of protective gear, including bulletproof vests, heavy belts and other equipment. However, despite being prepared for any visible threat, years of outdoor activity left Chris dangerously susceptible to UV damage.

Rates of melanoma and other skin cancers grow higher each year within the U.S., and among U.S. states Arizona is particularly hard hit. In 2019, more than 2,300 people are expected to be diagnosed with melanoma in that state alone, according to an American Cancer Society report. Knowing this, Chris made an immediate appointment with a dermatologist when he noticed the irregular mole on the back of his calf.

It was quickly diagnosed as nodular Stage 3D melanoma–which meant that the melanoma had grown more than 4mm thick and spread to nearby lymph nodes in his leg. Chris’ treatment plan was a calculated one-two punch. First, wide-local excision and a complete lymph node dissection to surgically remove all detectible cancer cells; then, Chris received nivolumab (Opdivo) infusions, an adjuvant therapy, over the next year.

The surgery was a success, but the road to recovery was long. In addition to monthly infusions, Chris also struggled to define his new ‘normal,’ how a melanoma diagnosis would impact his life as a father, husband, and community leader. “With something like this, you think about your family, and what would happen if you’re not there,” said Chris.

Before his diagnosis, Chris already devoted himself to his community, and to his fellow officers. He independently organized one-on-one support sessions to provide counsel and support to those in his unit experiencing high levels of stress. This work as a mentor and a sharer of ideas would prepare Chris for his new mission as a melanoma advocate.

With avid support from his wife Tammy, Chris began sharing his melanoma journey with as many friends and colleagues as possible, championing skin checks and devoted sunscreen use. With Chris and Tammy’s encouragement, several people had concerning moles checked and ultimately removed by a dermatologist. Chris has found that by sharing his story, he is also breaking down stigma that is sometimes associated with a cancer diagnosis.

Today, the Eyrich family is committed to raising awareness about melanoma. They also work to raise awareness of the unique occupational hazards faced by people who work primarily outdoors, such as police officers and other public servants. People who work outdoors need to be vigilant about sun safety, including: (re)applying sunscreen, covering up with hats and UPF-clothing, and regular skin checks.