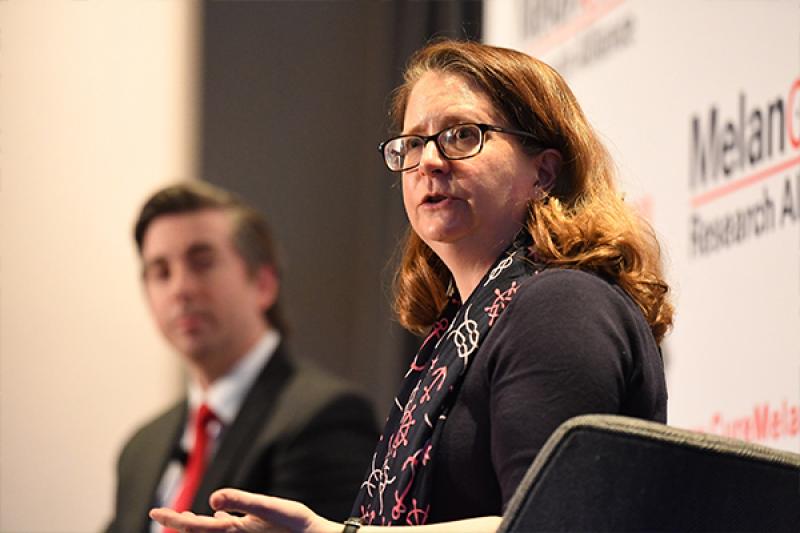 Melanoma research has undoubtably transformed what it means to be diagnosed with melanoma. For many patients facing melanoma, research has become synonymous with hope, and for good reason. In the last decade alone 13 therapeutic approaches have earned FDA approval giving patients, families, and clinicians new tools to treat melanoma. Up from 5-10% of patients in 2007, today about half of patients with advanced disease respond to available treatments; some may even be cured.

But there can be a fine line between hope and hype, especially today when news — both true and inflated — travels instantly via the internet and social media. As MRA President and CEO Michael Kaplan stressed in his opening remarks at the Melanoma > Exchange Patient & Advocate Forum, “Patients and their advocates need to understand what is real science now and what is just hot air.” To help in this regard, the MRA brought together oncologist Jason Luke of the University of Pittsburgh and medical journalist Liz Szabo of Kaiser Health News for an informative — and grounding — discussion on how to separate hype from hope, and the problems that can arise when the fine line separating the two is overstepped.

“There are real consequences to giving people false hope and inappropriate expectations that affects their care, comfort, and decisions about how they want to spend the rest of their lives,” noted Szabo. This is especially true in melanoma where the differences between patients who do exceptionally well and those who get little or no benefit from available treatment approaches is still poorly understood. Luke added, “Hope is good, but hype can be a barrier to reasonable expectations.”

Hype can be fueled at almost all levels, by scientists who need to out-compete others for grant funding to continue their work, by universities who want to highlight important work done on their campus, by government officials who want to herald the next great thing, pharmaceutical companies who have to please shareholders and hit sales targets, and journalists that “play the role of cheerleader because it gets them on the front page of a newspaper or on the 6 ‘o clock news,” Szabo noted. “Almost everyone has some motivation to hype,” she said, including patients and their families.

To separate hope from hype, Szabo suggested paying attention to the source of information about a new treatment, and relying more on reputable sources such as the American Cancer Society, the National Cancer Institute, the Food and Drug Administration, and the Melanoma Research Alliance. “Joe’s cancer blog is not where I would go for information,” Szabo said. She also stressed that “Misinformation spreads faster than the coronavirus. If it seems too good to be true then it probably is. A red flag for snake oil is a treatment that supposedly works for every kind of disease because that is never true.”

Szabo also cautioned against being seduced by articles that only highlight one patient who is doing amazingly well on an experimental treatment. “You need to know the denominator—is this one out of two people who do great on the treatment or only one out of 1000?” she said.

Dr. Luke added that because President Jimmy Carter did so well on his immunotherapy for melanoma, people assumed that everyone would.

Unfortunately, the sobering reality is that while more patients are responding than ever before, the majority of patients with late stage melanoma are unlikely to respond as well as President Carter.

Szabo noted that even when a clinical trial is generating positive results, these results may not apply perfectly to the general population because older and sicker people are historically excluded from participating in clinical research. Although eligibility criteria for clinical trials has slowly evolved towards being more inclusive of patients with diabetes, heart disease or other health conditions besides cancer, or those with metastases in their brain — these patients have historically not been included in clinical studies. “You don’t want to say no to progress, but you need to be realistic,” she stressed.

Luke pointed out that scientific progress tends to be slow, sometimes taking close to a decade from the time an experimental agent shows initial promise in the laboratory to the time it can be used in patients. He suggested that “if you read an article showing results only in animals and you can’t figure out how it would change what you would do now, then it probably can’t. We’re excited about the treatments we may have in the future, but these are not options we can grab and use now. We need to focus on what we can do here and now.”

The good news for patients and families who are navigating the surge in information focused on promising research is that they aren’t facing this alone. Luke recommended that patients work together with their doctors and care team to assess any information about new treatment approaches or emerging research to put it into the context of their current treatment plan. What is hyped today may be discarded tomorrow when more results come in, both Luke and Szabo stressed. “Just because it’s new doesn’t mean it will be better,” Szabo noted, pointing out that for every successful new drug, there may be a thousand experimental drugs that fail.

That being said, both Luke and Szabo suggested patients consider participating in a clinical trial if that appears to be their best treatment option, and they have the resources and the energy to do so. But patients and their families should also ask questions to understand the additional hassles — such as extra tests, visits to the doctor, etc. — and how likely these may work for them. A clinical trial may require patients to travel out of their area for treatment or to reside for long periods of time away from home, with no guarantee that the experimental therapy will work. “They can go the clinical trial route, but the reason a treatment is in a research trial is because we haven’t proven anything yet,” Luke noted.

Luke tries to be forthright in his discussions with patients about clinical trials. “I first tell them why a clinical trial will be horrible before I tell them why I am excited about it,” he said. “Expectation management is very important.” Szabo agreed, saying “You don’t want to give [patients] false hope that makes them disappointed and creates a lost opportunity to have end-of-life conversations.”

Part of that false hope can stem from poor communication between doctors and patients or incorrect assumptions about what words like ‘respond’ mean in the context of cancer care. “If your doctor tells you your tumor is likely to respond to a treatment, that doesn’t mean it will be cured by the treatment,” Szabo noted.

For example, in one study of patients with advanced lung or colorectal cancer researchers found that most of the participants mistakenly thought the chemotherapy they were being given solely to help relieve their symptoms — what doctors call palliative care — was going to cure them of their cancer. She also gave the example of a good friend of hers who died in the ICU from metastatic breast cancer because she continued taking a treatment that was unlikely to work and made her very sick. “If you only have weeks left, you may not want to travel to a hospital but instead travel to see a mountain or that brother you haven’t seen in years,” she said, adding, “I’ve lost dear friends to cancers so it makes me committed to not hyping cancer treatments.”