This Engineer is Building a ‘Better’ Biopsy 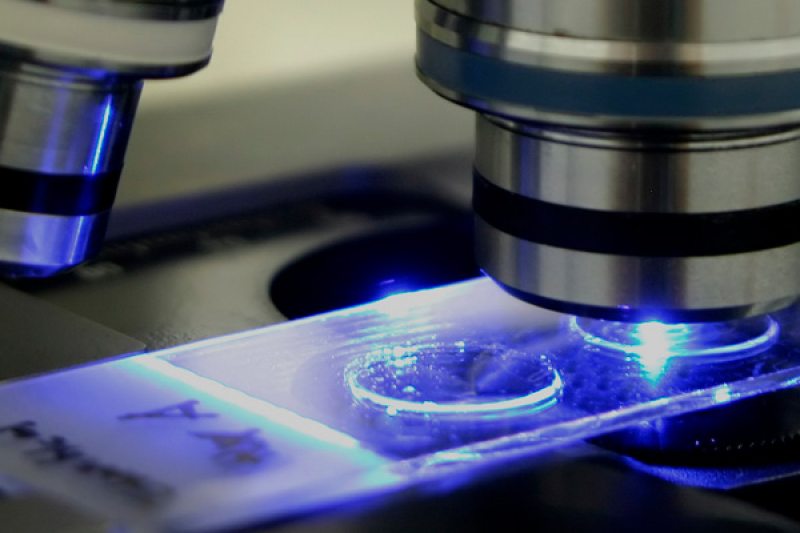 For the uninitiated, biopsies are a critical tool in the detection of melanoma and other skin cancers. They involve the surgical removal of a small amount of tissue – usually in a clinic setting without general anesthesia – that is then examined by a pathologist to confirm or rule out the presence of cancer. For most patients, the occasional biopsy is no big deal. However for patients facing multiple abnormal or otherwise ‘suspicious’ spots in highly visible places the prospect can be daunting.

Dr. Jesse Wilson, Assistant Professor of Electrical and Computer Engineering at  Colorado State University, hopes to change this using the power of teamwork, lasers, and artificial intelligence. Wilson, a 2018 awardee of the Brownstein, Hyatt, Farber & Schreck-MRA Young Investigator Award, is an electrical/computer engineer on a mission to build a better biopsy that doesn’t require cutting into patient tissue.

“Our pie in the sky goal is to harness the power of lasers to give doctors the same detailed view of individual cells within tissue, without having to cut out a biopsy, says Wilson. “The technology exists; my lab’s research is focused on using machine learning to make it more accessible and affordable, and to produce images that are easier for clinicians to interpret.”

Through a technique called confocal reflectance microscopy, which scans a laser – like those found in common laser-pointers– through a microscope, doctors can see through the outer layers of the skin. “Because cells, nuclei, melanin, and collagen scatter light in distinctive ways, we can use this to probe what’s happening beneath the surface,” said Wilson. This allows a clinician to examine multiple lesions to determine if they are cancerous – or the same lesion over time – without cutting into a patient. Confocal reflectance microscopes are already available in some clinics. The problem with this technique, however, is that the images produced are grainy and unrecognizable to pathologists who train extensively to interpret pristine biopsy specimens.

A newer approach, called multiphoton microscopy, is able to provide much clearer images using powerful lasers released in ultra-short bursts. However, at this point the equipment needed for this technique is too expensive and impractical for routine clinical use.

The research needed to bring these potentially game-changing approaches into regular clinical use just hasn’t been invented yet. Dr. Wilson, armed with funding from MRA, is hoping to change that.

“What I started to look at was, can we get the same level of detail and contrast these multiphoton techniques provide, using equipment that is already in the clinic by leveraging some of these new advances in deep learning artificial intelligence techniques that have taken off in the last decade.”

To do this, Dr. Wilson, and his Colorado State University colleagues Drs. Randy Bartels, Jeff Field, Chuck Anderson, and Doug Thamm, are gathering images from both techniques and then feeding them into a training algorithm. “What we are doing is teaching [the algorithm], so when it sees a specific pattern in the reflectance image texture, it knows that consistently this pattern matches thattype of molecular composition provided by the more advanced technique.” If his strategy works, simple confocal reflectance microscopy could be used to generate images with enough cellular detail to diagnose melanoma.

The project is still years away from going prime time, but for patients who regularly need biopsies to assess moles or other lesions, the potential is enormous. While it sounds a bit like science fiction –artificial intelligence and machine learning are going to continue to expand their reach into our lives.

For Wilson, his MRA grant came at the perfect time. “MRA funding played a huge role in setting the trajectory for my research,” says Wilson. “I was still making decisions about what directions my lab would pursue and MRA funding helped solidify that we can make an impact in melanoma. We’re going to be in a good place to leverage this award to apply for National Institutes of Health funding so we can continue this work moving forward.”

“When I was a computer engineer in undergrad, I never thought my work would affect people facing cancer. It was the dot com boom and I thought computers were cool,” says Wilson. “I never thought of the greater good that could be done with it – and once I saw the potential – I got excited that I could do something where my skills could have clinical benefit to other people.”