Melanoma is Determined, So is Eric 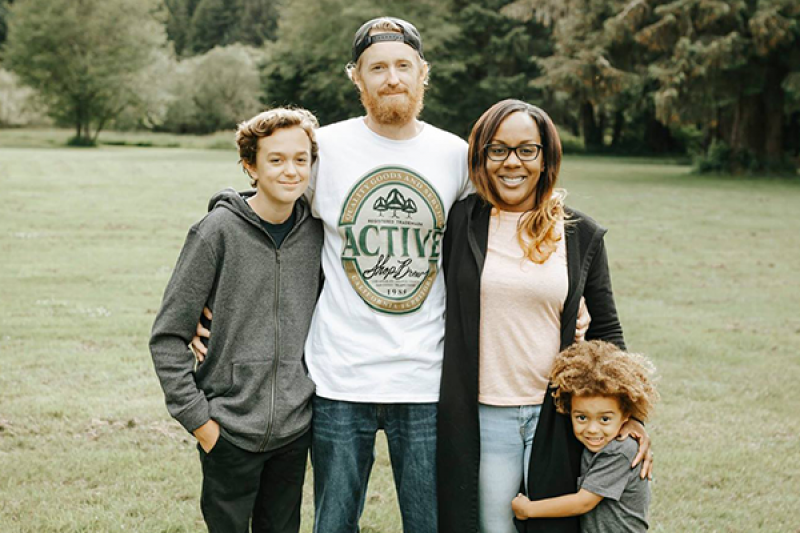 After 7 clinical trials, 8 surgeries, and more infusions than he can count --- Eric Martin is still here, seven years after being diagnosed with melanoma. He has had ups and downs and has tried practically every FDA-approved therapy for melanoma – but the crux of this story, which all readers need to understand, is that Eric’s fight isn’t yet finished. That’s because unlike many of the stories featured by MRA – Eric is still searching for his silver bullet and the elusive letters N.E.D. (no evidence of disease). He’s got big plans and melanoma isn’t going to get in the way. In short, Eric is a melanoma warrior.

It all started in 2011 with a stubborn scab-like spot on his back. He ignored it at first, hoping it would just go away on its own, but after it started to change colors and even bleed he decided to see a dermatologist. He was sitting in the waiting room and felt like he was sinking into his chair. “I was surrounded by posters of melanoma. It looked just like the mark on my back.” Before the doctor had even said a word, he knew what he was going to hear.

“Am I going to die? What’s going to happen? What’s next?” The thoughts raced through his mind. This feeling was foreign to Eric, he had never really been to a doctor before. He’d never even broken a bone. In fact, he had had no real medical issues in his life. He was confused and scared.

By the time he saw an oncologist and was told he had a 50/50 shot – he had put his game face on. He wanted to see a doctor that specialized in melanoma and found himself with Dr. Gregory Daniels at the University of California San Diego Morris Cancer Center.

Treatment started with surgery and adjuvant interferon, but it was soon discontinued when another lump was found. More melanoma. The cycle of surgery and interferon was repeated – but the reprieve was short lived. In August 2012, follow up scans revealed 20 ‘relatively small’ tumors all over his liver.

This time, surgery and interferon weren’t going to be enough. He and his doctor decided that the best bet was enrolling in a promising trial investigating tumor-infiltrating lymphocytes – or TIL therapy - at the National Institutes of Health with Dr. Steven Rosenberg. Some patients were seeing incredible results, which of course were not guaranteed. For Eric, the stakes seemed higher than ever: his wife just found out she was pregnant with their first child.

TILs, or tumor-infiltrating lymphocytes, are the white blood cells that have successfully fought their way into the tumor. One theory is that these TILs are insufficient in number and/or otherwise incapable of fully reacting to the tumor as a foreign invader to be killed. TIL therapy works by harvesting TILs from a patient’s tumor, expanding their numbers greatly in a lab, and then administering these lab-grown TILs back into the patient’s body. These infused cells, already primed to successfully swarm the cancer, are then further activated with high-dose interleukin-2 (IL-2).

The TIL therapy worked. In fact, it was considered a “complete response,” meaning that he wasn’t necessarily cured, but that signs of cancer had disappeared. It was a great year. He saw the birth of his son and things started to look up. Then, three green dots appeared on his right pectoral.

He immediately started his second clinical trial examining the then experimental combination of nivolumab + ipilimumab. After his first infusion of ipilimumab he landed in the hospital. The side effects of the immunotherapy were extreme and he dropped the ipilimumab altogether from the regimen. Nivolumab and surgery kept the tumors at bay, but eventually the spots came back. Tumors were now visible under his skin, and biopsies confirmed – it was all melanoma.

He started interleukin-2 (IL-2) and over 2 sessions had 50-60 doses of the medication infused into his bloodstream. Once again, the side effects brought on by activating the immune system reared their ugly head. “I wanted to die. It was horrible – easily the worst treatment I’ve ever gone through. I had every side effect that they warn you about, said Eric.”

Ultimately, it was all for nothing. The IL-2 wasn’t working.

The next two clinical trials that Eric enrolled in were based on vaccines. If doctor’s injected mutated virus into the tumor – then boosted the immune system using immunotherapy, could they persuade it to attack and ultimately clear the tumors? Some saw results, but Eric’s tumors continued to grow.

At this point, Dr. Daniels had run out of trials to help Eric enroll into. Eric was determined not to give up, but it is hard not to become frustrated and lose hope. In late 2017, He decided to try a new approach, and began to drive three hours each direction to Los Angeles to see Dr. Omid Hamid at The Angeles Clinic.

While the cancer was determined, so is Eric. Not only is he enrolling into his ninth clinical trial this week with Dr. Hamid, he is also looking into starting his own prevention focused non-profit organization. “I don’t want people to have a story like mine,” said Eric. “I want to make a difference. Stage 1 stories – are so much easier to hear.”

This article started by declaring Eric a melanoma warrior. The treatments he has tried read like a laundry list and nine clinical trials later – it would be easy for him to be jaded. The miracle is, that he isn’t. Eric is committed to making a difference and he hasn’t lost the spark of hope. He knows that researchers across the globe are working every day to crack the code and find a treatment that will work for people like him. And, he’s still an advocate for clinical trials: “Clinical trials have kept me alive. I’m still here.” That said, it isn’t always easy and sometimes it feels like the walls are closing in. “If I make the wrong decision, there are real implications. This could kill me. I just have to keep fighting until we find a treatment that will work.”