Stage 4 Melanoma, a Vaccine Clinical Trial, and the Power of Family & Faith 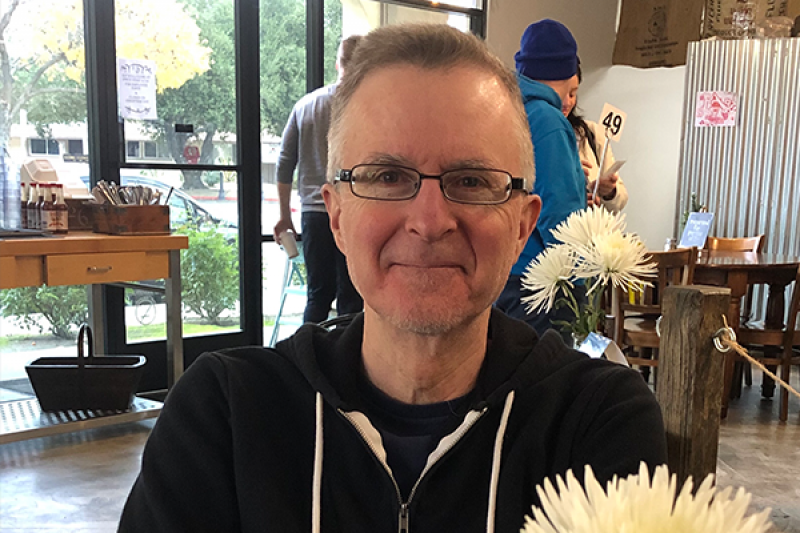 Keith Tolley knew things were serious when he watched the change on his Physician Assistant’s face as she examined a mole on his left thigh. He’d had it checked before by his dermatologist, who year-after-year told him not to worry, but to keep an eye on it. But something just didn’t feel right to Keith. Over the past few months, it had started to grow and had even started to bleed recently. “When my PA first took a look at my tumor her whole countenance changed.,” said Keith. “That’s when we [Keith and his wife] knew that this was more serious than we thought.”

Days later, the biopsy results confirmed the PA’s suspicions. The mole was melanoma. “The news took my breath away,” says Keith. “It went from a minor skin issue to something that could be deadly.”

Keith had already started research of his own, and while no expert, knew to ask about the staging – or how advanced – his melanoma was.

Her response was shocking: “the thickness would suggest stage 4.”

“It was so overwhelming. I had no idea the gravity of what was going on in my body.”

Googling melanoma can be a stressful exercise. Fortunately for Keith however, as part of his online research, he stumbled across a story from another man diagnosed with stage 4 melanoma. This patient received care at Massachusetts General Hospital and enrolled in a clinical trial testing the effectiveness of combining ipilimumab + nivolumab. Keith remembered thinking that if it came to it, he also wanted to be treated at Mass General.

Keith asked to be referred to Mass General, not knowing then how fortunate that decision would soon prove to be.

At Mass General, he brought his wife and four adult children to his first visit with surgeon Dr. Alex Haynes.

“We decided as a family that we’d tackle this together,” says Keith. “We came into that office with heavy hearts, really thinking that we were facing Stage 4 melanoma.”

Dr. Haynes quickly intervened. He explained that Stage 4 melanoma can’t be diagnosed with just a biopsy of the primary tumor. All they knew prior to surgery was what the pathology report told them, they did not know whether or not the disease had spread. He then outlined the immediate next steps – surgery to remove the primary tumor and additional tests to determine if the melanoma had spread to nearby lymph nodes. He urged the family to focus on the here and now – and to not race ahead to any other conclusions.

It was exactly what the family needed to hear.

“It felt like a word from God – so comforting,” remembers Keith. “We knew it wasn’t going to be easy, but with these next steps in mind, a huge heaviness was lifted from our hearts.”

Keith underwent surgery to remove the tumor and to perform what is called a Sentinel Lymph Node Biopsy to determine if the melanoma had spread to nearby lymph nodes. The surgery was daunting and required a 9-inch incision – but was ultimately successful.

After surgery Keith met medical oncologist, Dr. Justine Cohen. Drs. Cohen and Haynes explained the results of the SLNB. Out of the four lymph nodes studied, two had traces of melanoma.

At this point, Dr. Haynes could perform what is called a Complete Lymph Node Dissection – where all lymph nodes in the region are removed – or the team could closely monitor the site for recurrence. While CLND had been standard of care for decades, it carried its own side effects and risks. Newer research demonstrated that patients who underwent CLND experienced no difference in outcomes than patients who were closely monitored. The duo’s recommendation was to watch and wait.

Keith was closely monitored for the next ten months, but during a self-exam in April 2018 he noticed that a lymph node near the surgery site seemed enlarged. At first, the lump was too small to biopsy, but Dr. Cohen closely observed its progression. Two months later, they were finally able to evaluate it using a Fine Needle Aspiration.

“They knew right away that the results were concerning,” says Keith. “And the pathology report confirmed it as melanoma.”

With the recurrence confirmed, Keith’s doctors suggested he move forward with the CLND. The surgery took place in October 2018.

However, scans two months later brought more bad news. A small lesion had appeared on his liver. After a biopsy of the lesion, Keith was officially diagnosed with Stage 4 melanoma.

This is when Dr. Cohen’s expertise, as a medical oncologist, became absolutely critical. She walked Keith and his family through a variety of treatment options that were appropriate for Keith, including clinical trials.

Clinical trials are research studies that offer patients access to experimental treatment approaches that may prove more beneficial than anything currently approved by the FDA.

After a lot of discussion with Dr. Cohen, and Dr. Ryan Sullivan, Keith chose to pursue a clinical trial at Mass General. testing the safety of an experimental personalized cancer vaccine called RO7198457 combined with anti-PD-L1 immunotherapy, atezolizumab, in a trial sponsored by Genentech (NCT03289962).

“We decided early on that, as part of my treatment process, if there was anything I could do to help advance the research on melanoma – I was in,” says Keith. “We also understood that if the clinical trial didn’t work – I’d be closely monitored – and I could switch to a standard of care treatment option.”

For the next two months, Keith received infusions of the experimental drugs according to the trial protocols. Unfortunately, one of his regular scans soon showed that this single liver tumor had multiplied and that he now had a number of additional tumors spread throughout his body. “We were so hopeful that the trial drugs would work on my cancer”, Keith shared. “So the news about the rapid spreading of the melanoma came as quite a blow to us.”

With his cancer advancing despite the experimental treatment, the decision was made to pull Keith out of the clinical trial and to immediately begin a different treatment protocol consisting of ipilimumab + nivolumab. The same day that Keith was removed from the trial he received his first infusion of these two drugs.

The combination immunotherapy brings together the power of ipilimumab (Yervoy)– a CTLA-4 inhibitor – with nivolumab(Opdivo)– a PD-1 inhibitor – to create complementary and synergistic effects. The combo has been proven to be more effective than either drug on its own, with the cost of dramatically higher rates of serious or life-threatening side effects.

Keith made it through three – of the scheduled four – infusions of the combination before gastrointestinal inflammation became a safety concern and required him to stop treatment and to begin steroid therapy in May 2019.

Keith and his family were anxious. They knew the next set of scans, scheduled for July, were make or break. If his melanoma wasn’t responding – there was not much more that could be done at Mass General. In fact, Keith and his care team had already started making contingency plans for Keith to get a second opinion at MD Anderson Cancer Center in Houston, Texas.

Fortunately for Keith and his family, the scans showed the treatments were working. In fact, Keith’s stint in the clinical trial may have helped to prime his immune system for the ipilimumab + nivolumab. With the inflammation under control, Keith then began to receive nivolumab on its own – what doctors call monotherapy.

Keith’s last scans, in October, brought more good news – many of his tumors were continuing to shrink.

“It’s been a rough journey,” says Keith. “I’ve experienced a number of different side effects from these treatments. But, as a person of faith – and with the love and support of my incredibly amazing wife and children, and the prayers of so many others – I’ve been able to get through this.”

Keith may not be done with his treatment, but he can’t say enough about the quality of his care, care team, and his experience with clinical trials.

“Everyone at Mass General has been incredible, and I can’t say enough about Drs. Haynes, Cohen, and Sullivan,” says Keith.

For patients on the fence about volunteering for a clinical trial, Keith offers the following:

“Clinical trials allow you to take advantage of the latest research and experiences from doctors and patients who’re blazing the trails. It’s how you get access to cutting edge treatment options that might provide a better outcome for you than standard of care treatments. Clinical trials are also a way for you to help the next person who is going to have to go through this,” says Keith. “If you have the opportunity to be part of something that helps others, why wouldn’t you at least try it?”